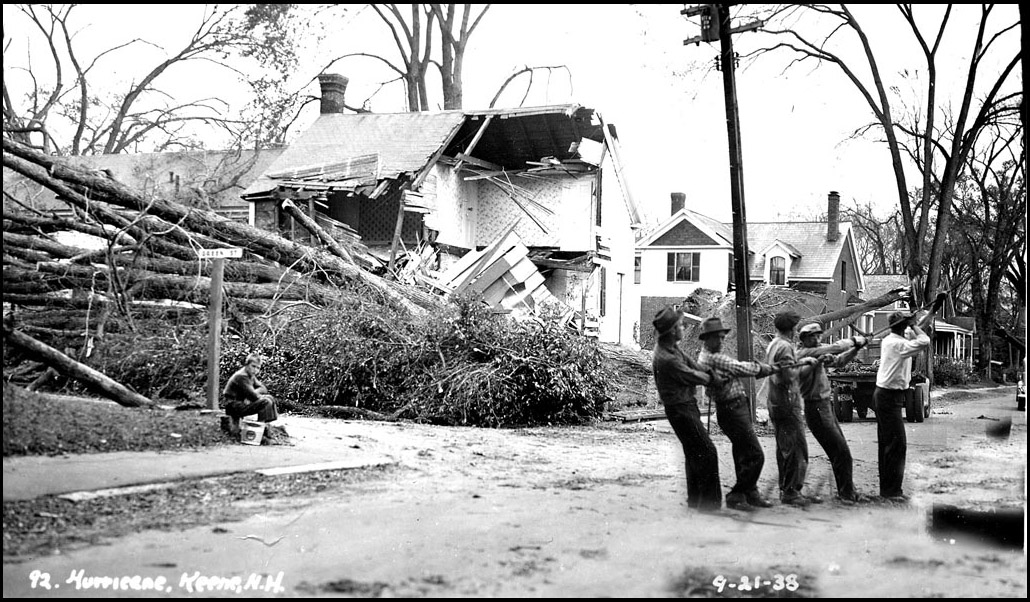 Memory is a capacity both individual and cultural. Think back to when the recent economic downturn began in 2007 and how frequently it was compared to the Great Depression. Some called it the “great recession” to reinforce the comparison. Because so many individuals could tell firsthand tales about the deprivations of the 1930s, the memory of it was still very much alive in the public consciousness.

When the 1938 hurricane slammed into Long Island and New England, not a single soul alive had ever experienced a major hurricane in New England. People were dumbfounded. They didn’t know what hit them because the last time a storm of anywhere near this magnitude had pounded New England was more than 120 years before, in 1815. The last identified hurricane of any size to hit New England was a compact but intense storm that clipped Rhode Island and eastern Massachusetts in September 1869. Any remnants of hurricanes to rain on New England in the six decades since then were not so different from any strong gale and were not identified as hurricanes. So many generations had lived and died since the last hurricane that any recollection of it had disappeared from the public consciousness, and most people thought Thirty-Eight to be New England’s first hurricane. The Boston Globe’s lead story the next day began, “A tropical hurricane of incredible violence swept Massachusetts and the rest of New England last night for the first time in the history of the area.”

Hurricanes were so unfamiliar that it was possible to err in the other direction, by lumping them in with tornadoes, as the Burlington Free Press did in its September 22 edition: Some older Vermonters compared the storm with the hurricane of August 6, 1900. In 1900 the storm was brief but much more intense, spending its violence in a half-hour of cyclonic fury that ripped hundreds of trees from their anchorage, tore down wires and poles and inflicted tremendous damage to house tops and buildings. . . . Yesterday’s scourge of wind and rain came hurtling in from the south. The 1900 cyclone roared down on the city from the north and northwest. . . . The 1900 hurricane was concentrated entirely on a small section of Lake Champlain and northern Vermont, wreaking its vengeance in a narrow path.

Clearly, the 1900 event was not a hurricane, but in 1938, journalists and the public they served knew as much about atomic bombs as they did about hurricanes—nothing.

Today, New Englanders on the coast have experienced enough high winds and storm surges during hurricane season that it’s now an accepted part of the weather calendar. Even inland in central Massachusetts, New Hampshire, and Vermont, the remnants of tropical storms have periodically brought enough rain to flood river valleys and knock bridges off their abutments. We all know hurricanes and probably have a story or two to tell about our experiences with them. So it’s hard to imagine a time when people could be shocked at the arrival of a hurricane. But that’s how it was in 1938. As far as people in the Northeast were concerned, hurricanes hit the South. If you lived in North Carolina or Florida or Texas, you might be prey to them, but not if you were a Yankee. It just didn’t happen.

What exactly is a hurricane? For the Taino people of the West Indies, a hurricane was an angry goddess. Their island paradise generously provided a world of abundance and bright sunny days, but each year, the evil goddess Huracan might come and change all that, showing up when summer’s heat began to wane. Huracan rode the winds and joined forces with thunder and floods to pummel the islands and lay waste to paradise. Early Spanish explorers, some of whose voyages were plagued by the work of these gods, brought the Taino word home to a world where such mayhem was unknown. Punishing wind, buckets of rain, earth-rattling thunder, and impossible-to-anticipate flashes of lightning breaking through the swirling rain and clouds—indeed, an angry goddess…

Another two-word definition of hurricane less fanciful and much less evocative than angry goddess is tropical cyclone. Each word is crucial.

To qualify as a hurricane, a storm must be born in the tropics and develop its power out over the warm waters of the Atlantic Ocean not far north of the equator. Because of the ocean’s huge mass, it doesn’t change temperature readily, so it takes until August and September for ocean temperatures to heat up to the 80 degrees Fahrenheit necessary to fuel the hurricanes that reach us. By then the ocean has warmed to 80 degrees not just at the surface but down to a depth of at least 150 feet, and that huge mass of warm water provides the reservoir of energy to help random thunderstorms coalesce into a system. If the disturbance develops a rotation, it becomes known as a tropical depression, generating wind speeds up to 38 miles per hour. Many storms never graduate past the depression stage, but when they do blow more strongly—39 to 73 miles per hour—they are termed tropical storms. In tribute to that increased power, the National Hurricane Center provides them names, a protocol that began in 1953. On average, a dozen named tropical storms develop in the Atlantic each hurricane season. Hurricanes differ from tropical depressions and tropical storms only in magnitude.

Beyond being tropical in origin, the storm must be a cyclone. Its winds must be cyclonic, blowing in a circular pattern around a center of low pressure. In the Northern Hemisphere, these cyclonic winds rotate in a counterclockwise direction; below the equator, they rotate clockwise. In the Pacific and Indian Oceans, tropical cyclones are known as typhoons or simply as cyclones, and have the same properties as a hurricane.

From Thirty-Eight by Stephen Long, published by Yale University Press in 2017. Reproduced with permission.

Stephen Long is founder and former editor of Northern Woodlandsmagazine and author of More Than a Woodlot: Getting the Most from Your Family Forest. He lives in Corinth, VT. 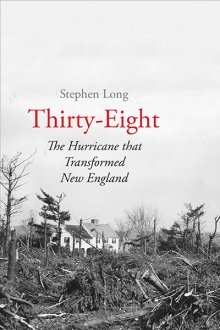 ‘Hurricane and Flood of 1938, Keene NH – Cleaning up’ by Keene Public Library and the Historical Society of Cheshire County via Flickr