Davis Trietsch and Julius Friedrich Lehmann made for an unlikely pair. Trietsch, a well-known German-Jewish statistician, journalist and sometime editor, spent many years living in New York, before returning to Berlin at the turn of the century. He was also an active Zionist, a regular visitor to Palestine and a prominent figure at the early Zionist congresses, even if his own views on Jewish settlement never aligned fully with many of the other delegates. In stark contrast to the worldly Trietsch, Julius Friedrich Lehmann was an anti-Semite who had made a name for himself as a publisher of medical, militaristic and eugenics literature. After the war, Lehmann’s Munich publishing house went into overdrive, producing a stream of racist and anti-Semitic tracts, while Lehmann himself was an early National Socialist sympathiser, moving in the same circles as Hitler. But together they took on a remarkably prominent role in Germany’s First World War propaganda campaigns, with Lehmann publishing and vigorously promoting Trietsch’s upbeat assessments of the German war effort.

What encouraged the two men to work together during the First World War was a shared belief in the conflict’s potential. Both men believed that Germany had to exit the war in a much stronger position than how it had entered it. Lehmann used his publishing house to make the case for a war of annexations, while on a personal level he also backed the nationalist German Fatherland Party (Deutsche Vaterlandspartei). Trietsch may never have been drawn to the political extremes in the same way as Lehmann, but he was certainly an outspoken advocate for territorial expansion. In a series of publications, he sketched out his vision for greatly expanded post-war Germany. According to Trietsch, Germany was in a prime position to annex colonies in Africa, including the Belgian Congo; Elsewhere, Russia’s Baltic provinces would be taken, while much of Eastern Europe would come under direct German control. In the west, Trietsch envisaged Germany removing a strip of land from France to bolster its border defences, as well as gaining parts of occupied Belgium.

It was on to the shaky foundations of an expansionist war policy that Lehmann and Trietsch built their working relationship. In 1916, Trietsch put together a thirty-two-page pamphlet— Germany Facts and Figures (Deutschland Tatsachen und Ziffern)— that Lehmann then published. Trietsch explained that he had two aims for the publication. First, he wanted to counter the Entente’s negative propaganda about Germany. Second, he also hoped to strengthen the German people’s faith in their country’s war effort. In the book itself, Trietsch brought together a whole series of national statistics covering everything from quantities of trade, levels of agriculture through to literacy rates and pace of population growth. For each category, he managed to show that Germany was in a far superior position to its two main wartime rivals, Britain and France. Out of nineteen European royal houses, for example, Trietsch calculated that thirteen were German, two and a half were French, and none British.

After successfully publishing their statistical pamphlet, the pair then released a poster that captured the most salient points from the book. Taking the form of an infographic, the poster used images, figures and bold colours to demonstrate Germany’s economic, political and social prowess. A large smartly dressed man towering over two smaller, shabbier figures, for example, was supposed to indicate that the German population outnumbered the French and the British. Similarly, a powerful red steam locomotive represented German railway track as stretching over greater distances than either Britain’s or France’s, which were depicted by much smaller steam engines chugging behind. The only time that the Entente powers were in the ascendancy was when the statistical category was a negative one, such as with literacy rates. According to Trietsch’s calculations, only two out of every 10,000 German military recruits was illiterate; in Britain and France by comparison, the numbers rocketed up to 100 and 320 respectively.

The poster that Trietsch designed was bold, bright and visually enticing. But this alone was not enough to convince others of his patriotic vision. When Trietsch’s fellow statisticians examined his data, they rightly dismissed many of his claims. Indeed, Trietsch had been wildly optimistic in his application of statistics. In the middle of the poster, he had suggested that Germany’s overseas trading outperformed that of both France and Britain. But on closer inspection, it became clear that his calculations were based only on European trade; including the British and French colonial empires would have revealed a very different picture. Elsewhere, his claims about the superiority of German coal mines or agricultural production were all predicated on a slightly lopsided way of reading the statistics. Realising the fallacy of many of Trietsch’s claims, the government’s foreign propaganda agency (Zentralstelle für Auslandsdienst) declined an invitation to distribute the poster and pamphlet. The only person to come to Trietsch’s defence was Julius Lehmann. In an angry letter to the government’s propaganda agency, he rejected their criticism and promised to continue his promotion of Trietsch’s “absolutely first-rate” publication.

The statistical poster and book proved to be the only significant collaboration between Trietsch and Lehmann. In the midst of war, both men quickly shifted their attention to other projects. By 1917, Lehmann had moved even further to the extreme right, particularly with his publication of the anti-Semitic journal, Deutschlands Erneuerung. Trietsch, meanwhile, continued to write extensively on the war, albeit with different publishers. Until defeat and revolution ended his wartime dreams, he repeatedly made the case for extensive annexations and for a more powerful Germany. The wartime partnership between Trietsch and Lehmann may have been brief, but it was never entirely forgotten. When Lehmann’s publishing house celebrated its fortieth anniversary in 1930, Trietsch carefully cut out a newspaper report of the event and filed the clipping away. His earlier wartime collaboration had clearly left an indelible mark on his mind.

Tim Grady is reader in modern history, University of Chester, and author of The German Jewish Soldiers of the First World War in History and Memory. He lives in Merseyside, UK. 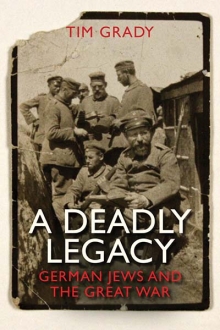