Over his seventy-four-year life, the Soviet dictator fought through a stormy historical landscape to become an important factor in events not only in Russia, but also the world. Among scholars, there is more agreement than controversy on the historical and ideational antecedents that shaped him, including traditional Russian authoritarianism and imperialism, European revolutionary traditions, and Leninist Bolshevism.25 These influences, of course, do not diminish his major personal contribution to the formation of a uniquely Soviet totalitarian system and ideology. Ideological doctrines and prejudices were often decisive in Stalin’s life and actions, but instead of receiving them passively, he adapted them to the interests of his own dictatorship and emerging superpower. His personality also played no small role in the political course he forged. He was cruel by temperament and devoid of compassion. Of all the available methods for resolving political, social, and economic conflict, he favored terror and saw no reason to moderate its use. Like other dictators, he was stubborn and inflexible. Concession and compromise were seen as a threat to the inviolability of his power. He made limited and half-hearted reforms only when socioeconomic crises were reaching the breaking point and the stability of the system was imperiled. His theoretical dogmatism lay at the root of the violence that defined his regime.

Underpinning Stalin’s worldview was an extreme anti-capitalism. His hostility toward this system was unequivocal, and he rejected even the limited concessions that Lenin made in instituting the New Economic Policy (NEP). Stalin grudgingly allowed a few capitalist economic vehicles within the Soviet system, such as money, limited market relations, and personal property. After millions had died during the famine of 1932–1933, he agreed to allow peasants limited freedom to produce and sell outside the collective and state farm system. But to the end he believed that the concessions that had been forced on him by hard circumstances would soon be reversed and the socialist economy would be transformed into a money-free powerhouse where people would work as ordered by the state and receive in exchange the natural goods that the state decided they needed.

In Stalin’s worldview, the state the Bolsheviks created was an absolute. All existence was completely and unconditionally subordinate to the state, and its highest personification was the party and its leader. Personal interests were recognized only to the extent that they served the state, which had the unquestioned right to demand from people any sacrifice, including their lives. The state was unrestricted in its actions and could never be wrong, as it represented the ultimate truth of historical progress. Any action by the regime could be justified by the greatness of its mission. Mistakes and crimes by the state did not exist; there was only historical necessity and inevitability or, in some cases, the growing pains of building a new society.

The primary tool used to compel submission to the state and suppress the individual and the social was the so-called “class war” against foreign and domestic “enemies.” In this war, Stalin was the foremost theoretician and a ruthless tactician. With the successful advance of socialism, he asserted, the class war would only intensify. This idea was a cornerstone of his dictatorship. As a means of interpreting reality, the class war theory was also a powerful propaganda tool. Inadequate political and economic outcomes, the hardships endured by the populace, and military failures could all be explained by the underhanded scheming of “enemies.” As a method of state repression, class war gave the Terror the breadth and brutality of an actual war. The Soviet dictator has earned the distinction of being the organizer and director of one of the most powerful and merciless terror machines known to history.

Stalin had no trouble reconciling Marxist and Bolshevik-Leninist dogma with great-power imperialism. In November 1937, he told his associates the following: “The Russian tsars did many bad things. They plundered and enslaved the people. They waged wars and grabbed territory in the interests of the landowners. But they did do one good thing—they created a huge state that stretches all the way to Kamchatka. We have inherited that state. And for the first time we, the Bolsheviks, have brought together and consolidated this state as a single, indivisible state . . . for the benefit of the workers.” These candid words are all the more telling as they were spoken at a dinner celebrating the twentieth anniversary of the October Revolution, the country’s main revolutionary holiday. In the international arena, Stalin’s expansion of the empire makes him a worthy heir to the Russian tsars. Only the ideological façade was different. At the Berlin train station on the eve of the Potsdam Conference in 1945, U.S. Ambassador to the Soviet Union Averell Harriman asked Stalin how it felt.to arrive in the capital of a defeated enemy as a victor. Stalin replied, “Tsar Alexander made it all the way to Paris.” Yet Stalin arguably outdid the tsars. The Soviet empire expanded its sphere of influence to encompass huge swaths of Europe and Asia and transformed itself into one of the world’s two superpowers.

From Stalin by Ben H. Shepard, published by Yale University Press in 2017. Reproduced with permission.

Oleg V. Khlevniuk is a leading research fellow at the National Research University Higher School of Economics (HSE) International Center for the History and Sociology of World War II and Its Consequences and senior research fellow at the State Archive of the Russian Federation. His previous Yale books include The History of the Gulag, Master of the House: Stalin and His Inner Circle, and several collections of Stalin’s correspondence. 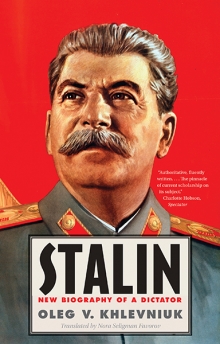