On October 31, 1967, California governor Ronald Reagan addressed seventy-three diplomats, businesspeople, and academics who had assembled in Sacramento for the fourth annual Chile-California Conference. As the former Hollywood actor and future US president told his audience, “Well, Chile is something special to California, and to Californians for a lot of reasons. We have had a long relationship with this friend of ours to the South.” Reagan continued: “Our similarity of climates, our common Spanish heritage, which leaves us with cities of the same names, our sharing of the favored Pacific currents, give us much in common. This is the reason a Chile-California Program was started. This is why we, today, can easily answer the question, ‘Why Chile?’ Our friendship cannot be disregarded.”

As he so often did, Reagan spun nostalgic tales about an illustrious past to distract his audience from a disheartening present. The governor paired his laudatory opening remarks with the dispiriting announcement that he had rejected federal funding to continue the Chile-California Program. This intercontinental initiative, signed by President John F. Kennedy shortly before his 1963 assassination, was subsidized by the United States Agency for International Development (USAID) and lasted until partisan wrangling between Governor Reagan and State Department officials led to its demise in 1968.

Both the Chile-California Program and the Convenio advanced Chile’s “Californianization” while also shaping the ideological confrontations that preceded and followed Chile’s 1973 golpe de Estado (coup d’état). The Convenio bore some similarities to an educational exchange between the Pontificia Universidad Católica de Chile, commonly called La Católica, and the University of Chicago. While the Chilean students who studied under the University of Chicago’s right-wing economists Arnold Harberger and Milton Friedman during the 1950s and 1960s returned home and restructured Chile’s economy around the neoliberal mantra “Stabilize, privatize, and liberalize,” those involved with the University of California exchange produced far more diverse political, environmental, and social outcomes.

The Chile-California Program and the Convenio emerged within the context of the Alliance for Progress, a sweeping strategic initiative launched by President Kennedy in 1961. As Kennedy announced on March 13 that year at a White House reception for 250 Latin American diplomats and US Congress members, “Therefore I have called on all the people of the hemisphere to join in a New Alliance for Progress—Alianza para Progreso—a vast cooperative effort, unparalleled in magnitude and nobility of purpose, to satisfy the needs of the American people for homes, work and land, health and schools—techo, trabajo y tierra, salud y escuela.” After listing ten specific steps the United States would take when administering this Marshall Plan for the Western Hemisphere, Kennedy declared, “We propose to complete the revolution of the Americas—to build a hemisphere where all men can hope for the same high standard of living—and all can live out their lives in dignity and freedom. To achieve this goal political freedom must accompany material progress.” Intended as a decade-long, twenty-billion-dollar effort to bolster market-based development strategies throughout Latin America, the alliance was a watershed in US attempts to use economic aid as a foreign policy tool. In August 1961, members of the Inter-American Economic and Social Council of the Organization of American States gathered at the resort town of Punta del Este, Uruguay, where North American officials and representatives from nineteen Latin American countries issued the charter that officially launched the Alliance for Progress.

Many of its initial goals were laudable. Agrarian reform, adult literacy, low-cost housing, equitable income distribution, price stability, and trade diversification made the list, but Cold War strategic priorities overshadowed these objectives. Frightened by Cuba’s 1959 revolution and Soviet premier Nikita Khrushchev’s support for leftist movements in the Western Hemisphere, Kennedy called Latin America “the most dangerous area in the world.” Under Kennedy’s leadership and the subsequent guidance of President Lyndon B. Johnson, the Alliance for Progress linked development assistance to counterinsurgency. As a result, the program suffered from contradictions between rhetoric and realpolitik. Former Central Intelligence Agency consultant Chalmers Johnson coined the term blowback to describe the long-term consequences of such covert foreign policy strategies.

In the formal assessments of US lawmakers and the informal appraisals of Latin American popular opinion, the Alliance for Progress was a resounding failure. After taking office in 1969, President Richard M. Nixon appointed fellow Republican and New York governor Nelson Rockefeller to study the effectiveness of the program’s first eight years. Rockefeller and twenty-three advisers made four trips to Latin America. In Argentina and the Dominican Republic, crowds violently protested their visit; in Chile and Venezuela, officials gave them the cold shoulder; and in Haiti, Rockefeller appeared in photographs, hobnobbing with the brutal dictator François “Papa Doc” Duvalier. In the preface to his 1969 report, Rockefeller explained, “There is general frustration over the failure to achieve a more rapid improvement in standards of living. The United States, because of its identification with the failure of the Alliance for Progress to live up to expectations, is blamed.”

Despite this disappointing outcome, the early years of the alliance were optimistic ones for US policy makers. In 1963, a confident President Kennedy suggested the idea for the Chile-California Program to California governor Edmund Gerald “Pat” Brown Sr. This state-based foreign exchange initiative was among Kennedy’s final policy proposals before his assassination that November. After US administrative task forces visited Chile three times to determine the project’s feasibility, officials from California, USAID, and Chile signed a contract of technical cooperation in December 1963. The parties agreed to focus on developing Chilean agriculture, education, water resources, highway transportation, and fiscal planning. Program officers established a headquarters in Santiago with a secondary bureau in Sacramento. By 1965, forty-five consultants from California had completed more than fourteen thousand hours of work on Chilean field projects, which ranged from upgrading standards and regulations for agricultural commodities to carrying out feasibility studies for national transportation schemes. To generate public awareness about these efforts, the program’s second deputy director, Alan Sieroty, appeared in a series of radio announcements and on-air interviews in both Chile and California.

The Chile-California Program’s approach to foreign policy was not without precedent. Its forerunner, the Plan Chillán, was a decade-long development initiative launched in 1953. This technical cooperation program linked US agricultural extension agencies with the Chilean Ministries of Agriculture, Education, Health, and Public Works and the Corporación de Fomento de la Producción de Chile (Production Development Corporation of Chile, or CORFO) in an effort to improve rural food production, housing, transportation, and hygiene in central Chile’s Maule, Ñuble, and Concepción Provinces. Centered on the city of Chillán—coincidentally, the same municipality where Henry Meiggs had taken refuge after his arrival in Talcahuano—the program differed from previous international financial aid efforts that had relied on capital grants, direct loans, or material assistance. Instead, Plan Chillán encouraged direct technical exchanges between comparable institutions in the two countries.

Supported by the Rockefeller Foundation, the United Nations Children’s Fund (UNICEF), the United States Institute of Inter-American Affairs, and the University of California, Plan Chillán paired more than one hundred Chilean technicians with agronomists, economists, veterinarians, and urban planners from US institutions. Through collaborative fieldwork, these groups vaccinated cows against hoof-and-mouth disease, modernized the region’s milk-processing facilities, developed a soil conservation plan for central Chile’s agricultural zones, and instituted cooperative farming initiatives in rural areas. In addition, with the assistance from University of California agronomists, the University of Concepción opened a School of Agronomy in 1954. Plan Chillán’s forestry programs also fostered the widespread planting of Monterey pine and eucalyptus trees throughout Concepción’s coastal zones while promoting a suite of “green revolution” technologies, including petrochemical fertilizers, pesticides, harvest mechanization, and irrigation techniques.

From Stranger’s on Familiar Soil: Rediscovering the Chile-California Connection by Edward Dallam Melillo, published by Yale University Press in 2017. Reproduced with permission. 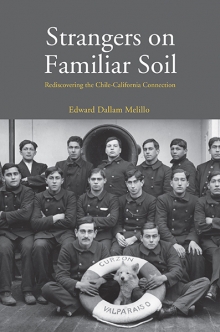