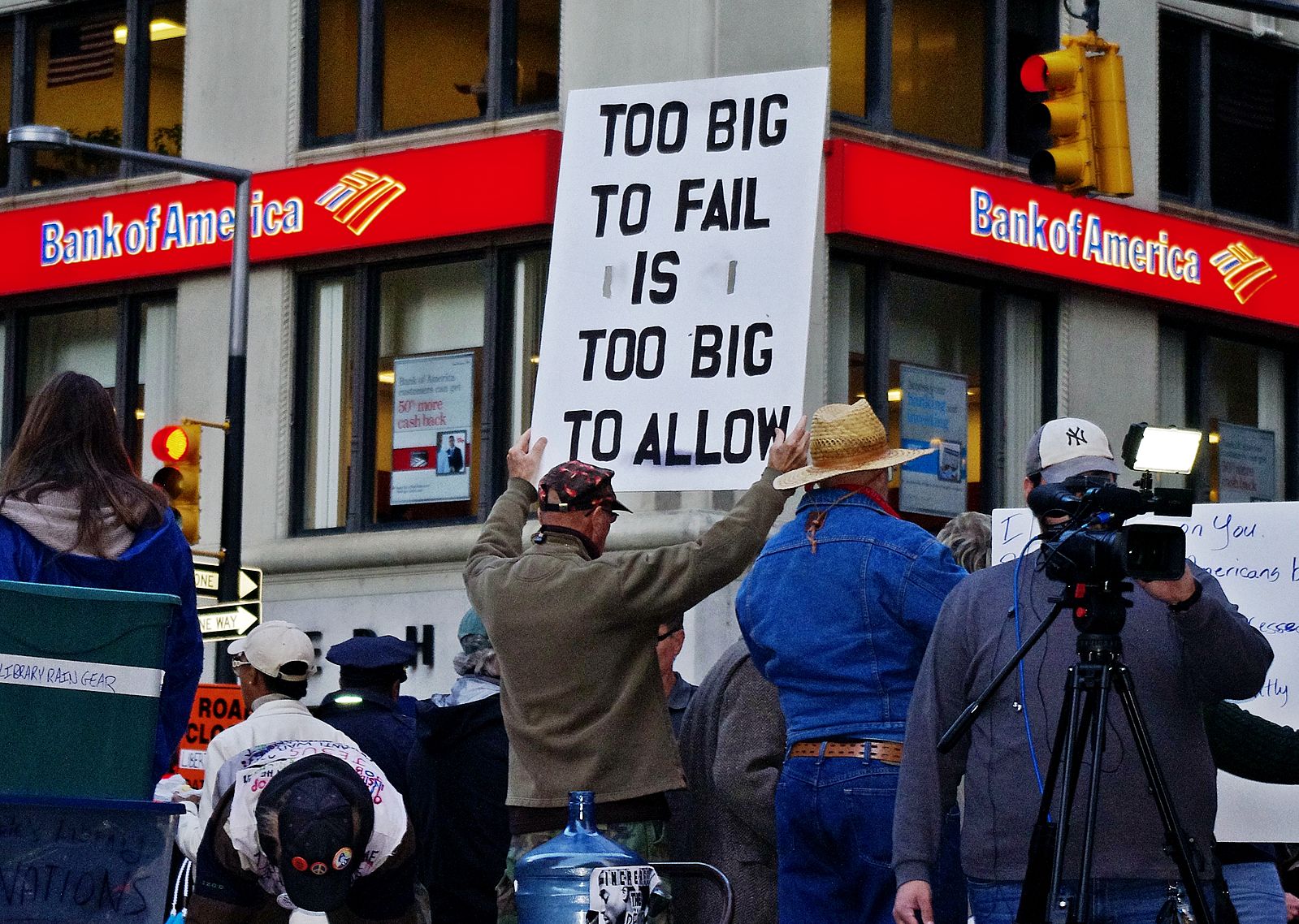 US financial reformers faced a fundamentally different issue from those in Europe. Banks in Europe were under a flawed single system. The issues in the United States, on the other hand, centered on the dual nature of the pre-crisis banking system that contained a relatively tightly regulated core and a loosely regulated shadow banking system. Post-crisis changes in US regulation were thus focused on revamping the regulation of shadow banks and altering the dividing line between the two sectors.

Bringing the investment banks into the regulated banking sector leveled the playing field between the two halves of the banking system. However, the broker-dealers at the heart of the investment banks are still subject to some differences in regulation compared to commercial banks, although how these procedures would work in the case of a new crisis is unclear given the creation of a system-wide oversight council which can label firms as systemic. In addition, while the FDIC can extend support to broker-dealers in the face of a crisis, it may take a more cautious approach to such nonbanks compared to its traditional bank clients.

This major change in the US dual banking system has been reinforced by numerous other tweaks, most of them contained in the 2010 Dodd–Frank Wall Street Reform and Consumer Protection Act. Among its many provisions, the Dodd–Frank Act ended the silos across regulators that had allowed the rapid pre-crisis expansion of shadow banking system. More specifically, the act created the Financial Stability Oversight Council (FSOC), chaired by the Secretary of the Treasury and including all major financial regulators, with a mandate to oversee the entire US financial system for systemic risks and regulatory gaps. For example, the FSOC can require Fed oversight of nonbanks that are viewed as posing a potential risk to financial stability and facilitates information-sharing across agencies. While there are concerns about how effective the somewhat large and unwieldy FSOC would be in the event of a crisis, its creation clearly signaled a desire to end the destructive pre-crisis compartmentalization across US financial regulation.

Another important aspect of the Dodd–Frank Act was the Collins amendment, which limits the ability of large US banks that adhere to the Basel rules to use internal risk models to manipulate risk weights. The amendment requires these banks to calculate risk-weighted assets using the standardized risk weights designed for smaller banks as well as their own internal risk models and use whichever risk-weighted asset calculation is larger. The large US banks are thus subject to three regulatory capital approaches: The opaque internal risk model calculations of risk-weighted assets, the simpler and more verifiable standardized approach to risk weighted assets, and the Basel 3 leverage ratio on total assets discussed earlier. The use of standardized weights and the leverage ratio largely eliminates the ability of large US banks to use their internal risk models to reduce capital buffers, just as before the crisis the simple leverage ratio protected the US regulated banks from the erosion of capital buffers seen in the Euro area and US investment banks.

Numerous other aspects of US financial regulation were strengthened by the Dodd–Frank Act. Among the most important is the Volcker rule, which disallows banks from most trading in markets on their own behalf and raised the capital buffers on the reminder. Capital requirements were also tightened on repurchase agreements (repos) and securitizations, the latter of which has essentially ended private securitizations. In addition, complex institutions such as universal banks are also required to create living wills that specify how they will be resolved in the event of bankruptcy, many shadow banks such as hedge funds are now registered with the Securities and Exchange Commission (SEC), which also now oversees the credit agencies, and the Consumer Financial Protection Bureau was created. On the other hand, the international effort to move trading of derivatives to centralized platforms to make the market more transparent and avoid the confusion associated with the pre-crisis spaghetti bowl of bilateral trades has met with only partial success. In particular, while the US repo market has shrunk and the length of the typical loan has been extended, a lot of trading has moved from the more transparent and more easily regulated trilateral market, in which a third party holds the collateral, to the hazier bilateral market in which the lender and borrower dispense with third-party assistance.

A final major element of US regulatory reform was the nationalization of the two major housing government-sponsored enterprises (GSEs), Fannie Mae and Freddie Mac. Before the crisis, the status of these institutions was ambiguous as they were private institutions with a public purpose. The markets treated them as having a pseudo-government guarantee, on the (accurate) assumption that in the event of a crisis the federal government would take control of them. With the private mortgage-backed asset markets moribund, essentially all new mortgage-backed securities are now being issued through Fannie and Freddie, and hence have federal guarantees on the quality of the underwriting. In short, the US mortgage-backed securities market has in effect been nationalized.

How do these changes respond to the problems observed in the pre-crisis US financial system? Three major trends created the US financial crisis. The first was the expansion in securitization of mortgages as higher capital buffers for regulated banks provided incentives for them to sell such loans to shadow banks with lower capital buffers. The second was the accompanying expansion of the lightly regulated shadow banking system centered on the investment banking groups, including their broker-dealer operations that borrowed wholesale funds from those with large pools of cash and lent them out to other parts of shadow banking such as hedge funds. Finally, the widening of repo collateral to mortgage-backed securities and foreign bonds led to an increase in private label securitizations based on questionable mortgages and an increase in dollar borrowing and purchases of such US assets by foreign banks.

The US regulatory revamp has largely negated these underlying weaknesses, although future changes in regulation could undermine this progress. Bringing the investment banks under Federal Reserve supervision has eliminated the differences between the capital buffers that provided the regulated banks with strong incentives to sell loans to investment banks and the rest of the shadow banking system. In addition, higher capital charges on securitized assets and repurchase agreements led to a dramatic decrease in the size of investment banks, including their loans to the rest of the shadow banking system. The result has been the effective elimination of private securitizations even in areas such as car and credit cards where private securitizations had always dominated. On the other hand, while differences in the size of capital buffers between US regulated and shadow banks have been eliminated, there remain significant gaps between the capital buffers required for Euro area and US banks. As discussed earlier, this risks the reappearance of trades based on this gap.

Recent moves by the Trump administration suggest a willingness to reduce the burden of financial regulation. While most of this effort is directed at small banks, these include moves to curtail the powers of the FSOC and of the Consumer Financial Protection Bureau and to weaken provisions such as the Volcker rule. In addition, talk about passing a twenty-first century Glass–Steagall law opens up the possibility that investment banks will again face less stringent regulation than regulated banks, potentially reopening the differences in regulation that helped drive the crisis.

On a wider level, the difference between the European regulators’ past and present focus on risk weights based on internal models and the US preference for including an unweighted leverage ratio leads to the question of the relative merits of the two approaches. Clearly, a risk-weighted measure would be more sensible if risk could be accurately measured, as bank capital buffers are held to offset potential losses that should vary with the type of loan. On the other hand, several studies have found that the leverage ratio based on total assets was a better predictor of bank failures than risk-weighted ratios in both the US and Euro area over the crisis, suggesting that an unweighted measure of assets is safer despite its apparent bluntness. The evidence about which banks were hit hardest over the crisis, however, may reflect the nature of this particular crisis, which involved a prolonged period of market turmoil. Such turmoil would naturally have its largest effect on banks with large investment banking operations. In addition, leverage ratios create their own distortions, particularly by lowering the incentive to keep low-risk loans on the books, implying that either fewer safe loans will be made or that banks will sell them to institutions under less onerous capital charges.

Ultimately, it is difficult to determine whether a generic risk-based capital standard based on standardized risk weights is better or worse than an unweighted one. This suggests aiming for a regime in which both matter by making sure that capital buffers are adequate using both the leverage ratio and the risk-weighted approach. Most basically, however, it is difficult to see why regulators continue to let banks use individual internal risk models to calculate risk-based capital charges rather than using standardized risk weights determined by supervisors. These models were introduced as a method of reducing the role of bank regulation on the assumption that market discipline would create the needed constraints on bank behavior. The crisis amply demonstrated that this approach was a mistake, and that using proprietary models to calculate capital buffers can create powerful incentives for a regulatory race to the bottom in search of short-term competitive advantage.

From Unfinished Business: The Unexplored Causes of the Financial Crisis and the Lessons Yet to be Learned by Tamim Bayoumi, published by Yale University Press in 2017. Reproduced with permission.

Tamim Bayoumi is deputy director in the strategy, policy, and review department at the IMF. He wrote this book while he was a senior fellow at the Peterson Institute for International Economics. He lives in Washington, DC. 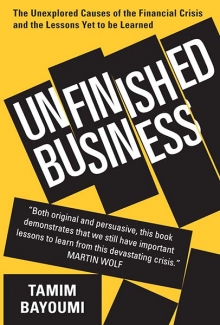