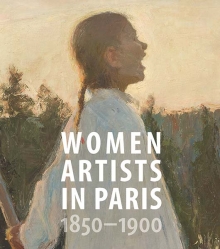 During the second half of the nineteenth century, a remarkable number and variety of women artists were drawn to Paris.  Featuring thirty-seven women from eleven different countries, a new, beautiful, and important illustrated book, Women Artists in Paris, 1850-1900, explores the strength of their creative achievements, and pays tribute to these pioneers who generated momentum toward a more egalitarian art world.  Here is an insightful q&a with Laurence Madeline, who wrote the book and curated the related exhibition, which opens this weekend at the Denver Art Museum.

Yale University Press: Where did the inspiration for this exhibition come from?

Laurence Madeline: Like all important projects, the Women Artists in Paris premises drew on a variety of motivations.

First, I was interested in the second half of the 19th century and wanted to explore it in a different way. I imagined it as a journey behind the mirror… women are represented over and over again, but what about their own artistic aspirations?

Second, it was the moment, back in 2007 when the project started, when contemporary women artists were exhibited in what had been considered the realms of male artists (Venice Biennale, Turner Prize…) and I wanted to understand the path women followed to the point of being, at last, celebrated.

Third, I have raised two daughters and I often think about their future as women, the opportunities they may have, the obstacles they still may have to overcome. In pondering what it is to be a woman, thinking about women artists helped to clarify and underscore the role of misogyny in our society, history, education…

YUP: Are there images in the book that you encountered for the first time through this project that really surprised you?  Why?

LM: So many that this is a difficult question to answer!

I must say that even Berthe Morisot, whose work is very famous, surprised me when considered in a feminine context.

I have developed a real passion for Scandinavian painters. Swiss painters too… While I wouldn’t say that I feel the exact same way about each of the artists represented in the book, the truth is that I made the selections I did based on my wishes and tastes.

YUP: Is there are particular artist whose work is featured here who you think particularly deserves to be better known, and the subject of further scholarly investigation?

LM: Certainly Virginie Demont-Breton.  She is of great interest. Gaining a fuller and better understanding of her career would result in a much clearer picture of the position of women artists in France and would bolster the efforts to find their paintings and restore them.

YUP: Can you talk about some specific challenges you encountered in your research – and how you overcame them – in light of how underrepresented and underappreciated women artists at that time tended to be?

LM: Since I have been working on this project for almost 10 years, one of the biggest challenges was in fact to adjust to the new, improved – and most welcome! – situation of women artists.

10 years ago, women artists were not as well-known as today.

For example, Marie Petiet was an obscure provincial artist. So, her works were in bad condition, difficult to exhibit. A few years ago, she had a deserved retrospective in her home town museum in Limoux (a small city in the south of France). Now her paintings are in lovely condition, but she has become an icon, something of a star in Limoux, and it’s difficult to get one’s hands on the works.

Another challenge was to deal with the initial choice of exhibiting women artists and just women artists… Would it be a confirmation of this very old suspicion that they are weaker than their male fellows? Would it be like a kind of ghetto? Now that I can see the works together, I know that the show has its strength and that the question of the gender is a question of condition of creation, not of quality.

YUP: Having completed this impressive project, what do you see as important steps going forward for art historical scholarship to continue recognizing the work of women artists?

LM: Among other efforts, it’s important to re-evaluate the historical criticism.  This was written by men, we have tended and use and re-use the same terms, images, and concepts.

The famous 1971 essay by Linda Nochlin, “Why Have There Been No Great Women Artists?” remains a useful tool, but it is important to understand that this question has been posed since the beginning of the 20th century. It’s a question that exposes the misogyny of art criticism, and is a reflection of society at large. The language of art criticism during the 19th century has to be understood in a new way, and we must always assess how deeply these damaging misconceptions were rooted in order to get rid of this paralyzing historical framework.

Laurence Madeline is the author of the book Women Artists in Paris, 1850-1900.  She is the curator of the related exhibition, Her Paris: Women Artists in the Age of Impressionism, which opens on October 22nd at the Denver Art Museum.  The exhibition will then travel to the Speed Art Museum in Louisville, KY, and the Clark Art Institute in Williamstown, MA.  Ms. Madeline was formerly chief curator of the Fine Arts Division of the Musée d’Art et d’Histoire (MAH), and curator at the Musée D’Orsay, Paris.