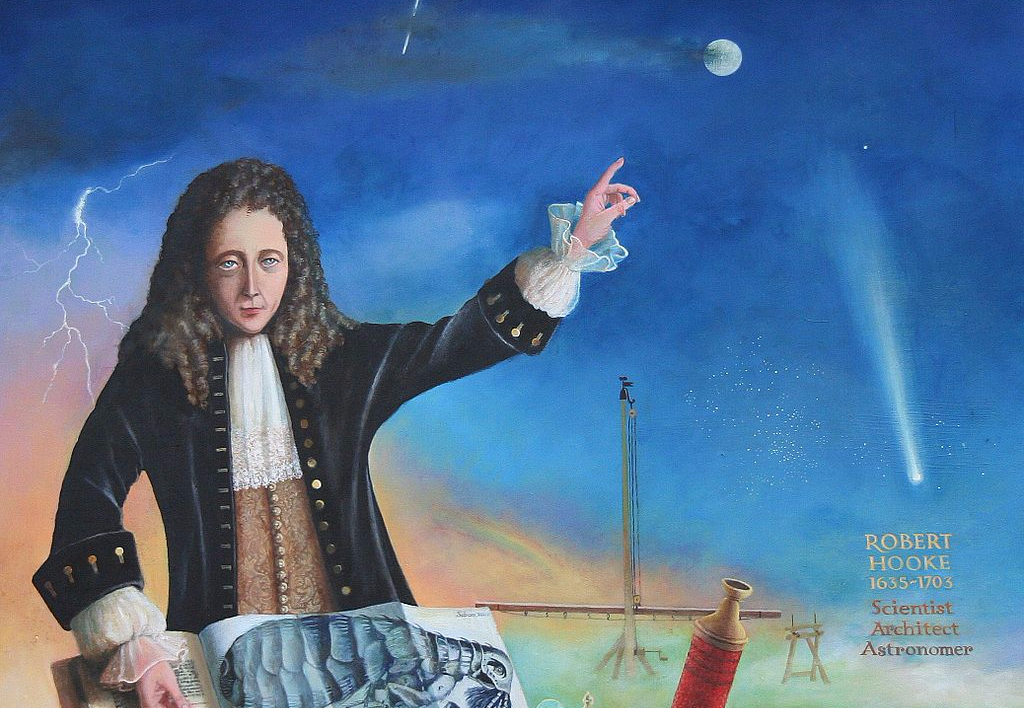 Who was the first person to realise that gravity is a universal force possessed by every object in the Universe, which attracts every other object? Isaac Newton, right? Wrong! Newton got the idea, and other insights which fed into his theory of gravity, from Robert Hooke, a seventeenth-century polymath whose work has been overshadowed by the giant figure of Newton.

Hooke was both an experimenter and observer, and a theorist.  His insight about gravity came partly from his telescopic observations of the Moon.  He studied lunar craters and noticed that they are formed of nearly circular walls, around a shallow depression.  They looked, in his words “as if the substance in the middle had been digg’d up, and throw on either side.”  So he carried out experiments, dropping bullets onto a mixture of water and pipe-clay, making miniature craters which, when illuminated from the side by a candle, looked just like lunar craters.  He realised that the material thrown up from the centre of the craters of the Moon was pulled back down by the Moon’s own gravity, independent of the Earth’s gravity.  He pointed out that apart from small irregularities like craters, the Moon is very round, so that “the outermost bounds. . . are equidistant from the Center of gravitation”, tugged towards the center by gravity, and concluding that it had ”a gravitating principle as the Earth has.”  This was published in 1665, when Newton was just completing his degree at the University of Cambridge.  Hooke went on to suggest that planets are held in orbit by an attractive gravitational force from the Sun. This was a revolutionary idea. Hooke’s contemporaries argued that the planets were whirled around in vortices in some mysterious invisible fluid, like chips of wood in whirlpools on a river. When Newton convinced them that this was wrong, and gravitational attraction was right, they remembered him and forgot who gave Newton the idea!

Hooke wasn’t the only seventeenth-century scientist overshadowed by Newton. Edmond Halley, of comet fame, was another. It was Halley, in fact, who not only persuaded Newton to write his great book, the Principia, but paid for its publication! The most astonishing forgotten achievement of Halley, though, is that he was given command of a Royal Navy ship to make a scientific voyage of exploration to the southern ocean.  He was the captain and navigator (in Royal Navy language, Master and Commander), not a passenger. The ship, Paramore was just fifty-two feet long, with a crew of twenty-four.  It sailed on September 16, 1699, and Halley took it as far south as the edge of the Antarctic ice pack, making observations of magnetism and winds along the way.  At their furthest south, 52 degrees 24 minutes latitude, they were nearly crushed by icebergs.

On his return to England, Halley was lauded by Samuel Pepys as “the first Englishman (and possibly any other) that had so much, or (it might be said) any competent degree (meeting in them) of the science and practice (both) of navigation.” His navigational skills were also used by the British in secret surveying of the French side of the English channel, to make charts for use in time of war. When Halley became Savilian Professor of Astronomy at Oxford, the Astronomer Royal, John Flamsteed, complained that he “talks, swears, and drinks brandy like a sea captain.” He was indeed a sea captain, and proud of it; not your average Oxford Professor, even by eighteenth-century standards.

John Gribbin is the author of many best-selling books, including In Search of Schrödinger’s Cat. Mary Gribbin is a teacher and science writer, and previous winner of the TES Junior Information Book Award. John and Mary are both Visiting Fellows at the University of Sussex. 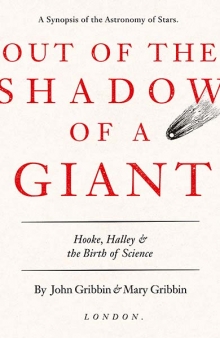 Memorial Portrait at The Open University by Rita Greer via Wikimedia Commons.