Æthelred initially identified himself and his counsellors as the guilty parties and set about remedying his ways, restoring church lands, promoting new figures, fostering reform and making amends. This also coincided with his reconciliation with his mother, who was to remain his guiding hand till her death (999 × 1001). When these initial efforts did not have the desired effect, Æthelred moved on to rooting out other sinful elements within society, ranging from the (purportedly) faithless Danish mercenaries in his employ (1002) to his own leading advisers (1005–6). As the viking threat mounted, these measures became more extreme and the results were predictably disas- trous. However, if the policies failed, that does not mean that they were ill- conceived. As noted, the ideas which guided Æthelred were in many respects perfectly rational. They are reminiscent of the attitudes studied by the anthropologist Mary Douglas in the 1960s and ’70s: Douglas noted that anxieties about purity and pollution are particularly pronounced in societies in which hierarchical and group bonds are strong (Æthelredian England would qualify); in such contexts purges become the natural response to mishap. To blame the king and his counsellors is therefore beside the point: their actions may not accord with what a modern armchair general would advocate, but they possessed an elegant logic of their own, one which was not lost on contemporaries, who wrote profusely about sin, repentance and the Last Judgement. That this line of thought damaged the kingdom’s defensive capabilities in the long run, depriving the king of his senior advisers and generals in the face of the ‘great fleet’ of 1006 and eventually leading to the dominance of Eadric Streona, should not be denied. Nonetheless, if Æthelred’s court became a place of conspiracy and intrigue, it was primarily as a result of this mind-set, not the personal failings of the king. In this respect, Æthelred’s experiences in the 980s and 990s had created something of a perfect storm, leading him and his counsellors to embrace reformist teachings about sin and repentance to an unprecedented degree.

Æthelred was therefore neither ‘unready’ – a simple misunderstanding of his later moniker – nor especially ill-advised. If anything, he was rather too active and availed himself rather too willingly of counsel: it was his determination to root out sin and purify society which sowed the seeds of his downfall. Given this, it may be no accident that Æthelred’s Anglo-Danish successors – who were themselves relatively recent converts – did not embrace such ideas about sin and repentance to the same degree: as in the aftermath of Louis the Pious’s reign in Francia, in post-Æthelredian England it must have seemed like a good idea to tone down such teachings. Still, the penitent ruler was not consigned to oblivion: Cnut too took counsel from Archbishop Wulfstan and on at least one occasion took the opportunity to restore lands to the church, expressing regret for his earlier mistakes in the process.

Of course, the incompetent, ill-tempered and resolutely ill-prepared Æthelred found in popular narratives from the twelfth century to the present day makes for better entertainment than the troubled, resourceful, but ultimately unsuccessful ruler presented here. For this reason, it is likely that a degree of unreadiness will always plague Æthelred. As recently as 2001 a one-act opera about the king opened in New York, in which Æthelred and his wife Emma appeal to Clio, the muse of history, to change his sobriquet from ‘the Unready’ to ‘the Resourceful’, a project which goes well enough until Dunstan intervenes, reminding the king of how he had defiled himself in the font at his baptism. Good entertainment – and perhaps good opera – this may be, and the plot at least gives a nod to more recent reassessments of Æthelred’s reign; nonetheless, the impression of incompetence of comic proportions remains. The true story of Æthelred’s life, however, is a tragedy, not a comedy, as the London-based chronicler already understood: a tale of a ruler who despite energetic – and at times resourceful – efforts could not succeed in bringing his nation the ‘peace and victory’ (to quote the Bath ordinances of 1009) they so desperately desired. Whether an Alfred the Great or a Charlemagne would have fared better in his shoes is an interesting question, but ultimately beside the point. What we can say is that Æthelred’s reign was too long, too complex and too dynamic to dismiss him as ‘incompetent’ or even ‘unready’; he deserves better, and so do we. Æthelred may not have been a great or even a good king, but he was not a hopeless one, and the Chronicle’s own epitaph perhaps best sums up his reign: ‘he held his kingdom with great toil and hardship for the length of his life’ (he geheold his rice mid myclum geswince 7 earfoðnessum þa hwile ðe his lif wæs).

From Æthelred by Levi Roach, published by Yale University Press in 2017. Reproduced by permission.

Levi Roach is lecturer at the University of Exeter, and formerly a junior research fellow at St John’s College, Cambridge. He lives in Exeter, UK. 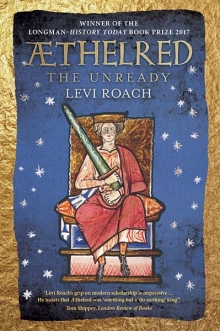