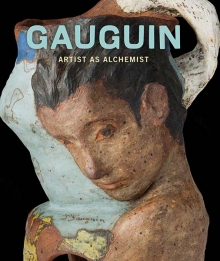 The exhibition “Gauguin: Artist as Alchemist,” which was on view this summer at the Art Institute of Chicago, was called “exhaustive and exhilarating” in the Wall Street Journal and a “resounding, rollickingly diverse exhibition” in the New York Times. It wowed visitors with an unprecedented exploration of Gauguin’s works in various media, from works on paper to clay and furniture.  Happily for us, there is a beautifully designed and illustrated book that we may continue to pore over.  We had the opportunity to ask Gloria Groom, the exhibition’s curator and book’s editor, a few questions about the project.

Yale University Press: Where did the inspiration come from to explore and unite the wide variety of Gauguin’s artistic endeavors?

Gloria Groom: Gauguin: Artist as Alchemist builds and expands upon our research from 1988 which informed the exhibition The Art of Paul Gauguin at The Art Institute, Musée d’Orsay and National Gallery of Art.  Since then the Art Institute has actively engaged scientists, conservators and art historians in investigations into the artist’s sometimes radically innovative techniques he used in printmaking including monotypes, wood block prints and transfer drawings.

Then in 2007 we acquired Earthly Paradise, a carved and painted cabinet, and soon afterwards a ceramic, Vase in the Form of a Tropical Plant with Bird and Deity. The research we compiled for these acquisitions in Pont-Aven and with our Conservation and Science team made us realize how rich this material was and how it offered a completely new perspective on the artist. So we decided to publish our research in an Online Scholarly Catalogue, which shed light on the Art Institute’s collection of Gauguin’s works, ultimately featuring over 200 unique works on paper in addition to the paintings and objects in our collection. In organizing this publication and thinking about the implications I thought it would be good to present it in exhibition form.

Coincidentally, about this time (2012) we learned that the Musée d’Orsay was contemplating a Gauguin retrospective. It was at that moment that we joined forces with the idea of approaching Gauguin from the perspective of his work in the decorative and “applied” arts and to show the relationship between the work in the so-called craft media with his better known paintings. It was an inspired pairing since we could build on Chicago’s technical research and take full advantage of the Musée d’Orsay’s superb collection of Gauguin paintings, ceramics, wood sculptures and bas-reliefs and the amazing manuscript for Noa Noa which we were able to present for the first time in Chicago.

YUP: What was the process of compiling Gauguin’s visual universe like?

GG: Gauguin was a prolific writer. In several of his manuscripts published during his life, including Noa Noa (1901), and posthumously, including Avant et après (1903), he talked about the people, places and artworks or objects in general that inspired him. We also know a lot about his interest in other cultures especially those he experienced at the Expositions Universelles (world fairs) held in Paris in 1878 and 1889. We could have included many more references to his visual inspirations but instead selected a discreet set of objects from a variety of sources to suggest his far-ranging interests.

YUP: Were there any surprises or interesting finds that came about while putting it together?

GG: As always there are surprises throughout the exhibition organization and final realization. From our technical research we knew that Gauguin, especially when he was living in Tahiti and many times waiting for materials for painting from Paris, would work in wood and create blocks for printing. And we knew that sometimes he would reuse the same block of wood for additional prints but we had no physical proof until Harriet Stratis, author for the exhibition, discovered in a remarkable block in a private collection. The block started out as the basis for a wood block print similar to the techniques Gauguin used for his Noa Noa series; however, in this case it had been reworked and cut more deeply until it became a bas relief sculpture. It was a “Eureka!” moment and of course we added it to the checklist immediately! And there were many discoveries when the ceramics that we knew only from black and white or early photographs started arriving for installation in the exhibition. Most of these had only been published to show one side and so it was wonderful to see the other views (which often included incised or appliquéd imagery) and compare through close scrutiny what we thought we knew with the new information.

YUP: What does Gauguin’s art contribute to the current debates about cultural appropriation?  What keeps him relevant?

GG: From the beginning I conceived of this exhibition as the title suggests — Gauguin: Artist as Alchemist.  It was always about how he turned raw materials like clay and wood into remarkable and magical art objects.  We did not get into the debate over his so-called misogyny and use of cultural appropriation, which has been dealt with many publications over the last 30 years.

Instead, we recognized his “appropriations” as Pissarro did in his own time, when he recounted printmaker Félix Bracquemond’s criticism of Gauguin’s ceramic works:

“Bracquemond said that some of his things were good, others not. All in all he seemed to imply that it was the art of a sailor, a little taken from everywhere. . . . I made up my mind about him [Gauguin] a long time ago, and while I won’t say that he may not change for the better, at bottom his character is anti-artistic, he is a maker of odds and ends.”

A few years later Pissarro questioned the artist’s originality himself, complaining, “He is always poaching on someone’s ground; now he is pillaging the savages in Oceania.”  For Pissarro, Gauguin was not a proper artist, but rather a bricoleur—someone who uses whatever he can get his hands on and ends up producing only “odds and ends.”

Our exhibition looks at the borrowings, recyclings, or what Pissarro referred to as Gauguin’s “bricolage” — his embrace of the random, the fragment, a recognizable cultural icon — to tell the story of Gauguin artist-alchemist.  We wanted to look with an open mind at what inspired him and how it was re-imagined in his work just as he reimagined a post-edenic Tahiti.

Rather than see his making of “odds and ends” as a negative we aspired to emphasize the artist’s creative process.  Ultimately Gauguin’s “appropriations” are not about the rape of a culture; they are borrowings linked to his visual universe and his interest in finding something outside of what he was a product of, and his experimentations with other cultures in the creation of a visual vocabulary was part of a larger goal, “to find a corner of myself that is yet unknown.”

Gloria Groom is chair of European Painting and Sculpture and the David and Mary Winton Green Curator at the Art Institute of Chicago.