The romantic figure of Leon Trotsky, a man who helped lead the Bolsheviks to power a hundred years ago and then came to embody defiance of Joseph Stalin, continues to haunt our imagination. He joined the Bolsheviks as an outspoken teenager, then endured arrest and Siberian exile before escaping to London where he first met Vladimir Lenin in October 1902. Fifteen years later they led an armed uprising in Petrograd and gained control of the Russian Empire.

Trotsky’s role in the revolution has always been questioned by ideological partisans. After Lenin’s death in January 1924, Stalin gained control of the Communist party apparatus and then moved against his rivals, most notably Trotsky. Trotsky had been among the most famous people in the country, universally recognized as Lenin’s closest colleague, who not only helped organize the Bolshevik overthrow of the Provisional Government in 1917 but then created the Red Army and successfully defended the new regime against domestic and foreign enemies during three years of brutal civil war. But as Stalin conspired against Trotsky, he raised questions about Trotsky’s role in the revolution.

Trotsky had broken with Lenin in 1903 over ideological issues. Their arguments lasted for over a decade and were frequently highlighted by sharp polemical disputes. None of this had been a secret nor was it unusual among Bolshevik and Menshevik activists who found themselves in exile, separated by distance and time from a Russia they longed to return to and control. But as Stalin welcomed new members into the party, people who owed their positions to him, had not experienced exile in Europe or Siberia, and had little knowledge or appreciation of the internal ideological disputes that had so animated party life, Trotsky found himself ideologically outmaneuvered, and gradually isolated within a party he had hoped to lead. Stalin organized a systematic campaign to obscure and defame Trotsky’s role in the Bolshevik Revolution and to inflate his own. By the time Trotsky was forcibly exiled to Turkey in January 1929, less than twelve years after the revolution itself, it was not publicly safe to defend Trotsky or his role alongside Lenin.

Ironically, recent news out of Moscow indicates an opposite point of view. To help mark the hundredth anniversary of the revolution, a new television series is set to air which claims that Trotsky, not Lenin-and certainly not Stalin-had been the true evil genius behind the Bolshevik takeover. Based on advance publicity and news coverage of the forthcoming series, Trotsky is depicted as a nothing short of a butcher with bloody hands. Just as Stalin had used Trotsky’s Jewish origins to compromise his standing among narrow-minded and bigoted activists, so at least some people in Putin’s Russia find it useful to blame Trotsky, and therefore the Jews, for the atrocities associated with the revolution.

Trotsky, of course, was not blameless. As the Bolsheviks consolidated control of Soviet
Russia, repressing their erstwhile socialist allies and establishing one-party rule, other revolutionaries who had known Lenin and Trotsky during their lonely years in Western European exile condemned their use of revolutionary violence and terror. Widely admired socialists like Karl Kautsky and Rosa Luxembourg understood that Lenin and Trotsky were rejecting democratic values in favor of dictatorship. Trotsky had no patience for their arguments. There was no mistaking his radical urges. This was the crux of the tragedy, for Trotsky personally and more significantly for Russia itself. The country was now in the hands of determined Marxists who would stop at nothing to hold onto power and impose their ideological views. In response to their critics, Trotsky insisted that whatever the party decided could only be interpreted as motivated solely by its commitment to advancing the working class. With the revolution, everything was possible. To defend the revolution, nothing was forbidden.

The writer Victor Serge was one of the few followers of Trotsky who had the courage to challenge him. Serge had come to understand that the opposition to Stalin was suffused with ideological intolerance when it needed instead to advocate freedom of conscience. Serge explained how he had implored Trotsky to recognize how the revolution “failed to consider  . . . the problem of liberty.” When Trotsky rejected his appeal, Serge did not hold back in his criticism.  “If [Trotsky] in his exile from the U.S.S.R. . . . had made himself the ideologist of a renewed socialism, critical in outlook and fearing diversity less than dogmatism, perhaps he would have attained a new greatness.  But he was the prisoner of his own orthodoxy, the more so since the lapses into unorthodoxy were denounced as treason.” For Serge it was not enough to oppose Stalin. Two decades after the revolution, Trotsky could not recognize the tragic flaw at the heart of the Bolsheviks’ triumph. He remained, after all the suffering that had touched his family, and after all the millions who had been destroyed by the revolution he had championed, a firm defender of the Bolshevik seizure of power and an opponent of orderly, parliamentary democracy based on respect for civil liberties and minority rights.

George Orwell also weighed in. He was burdened by how the legacy of the revolution was undermining the prospects for democratic socialism. Writing in 1939, Orwell was aware of Trotsky’s opposition to Stalin, but did not succumb to his allure.  “He is probably as much responsible for [the Russian dictatorship] as any man now living, and there is no certainty that as a dictator he would be preferable to Stalin, though undoubtedly he has a much more interesting mind.  The essential act,” Orwell concluded, “is the rejection of democracy-that is, of the underlying values of democracy; once you have decided upon that, Stalin-or at any rate someone like Stalin-is already on the way.”

Joshua Rubenstein is an associate of the Davis Center for Russian and Eurasian Studies, Harvard University. He lives in Brookline, MA. 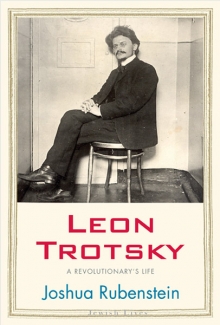