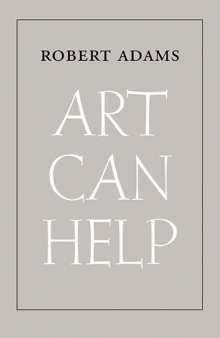 Since taking up photography in the mid-1960s, Robert Adams (b. 1937) has quietly become one of the most influential visual chroniclers of the evolving American landscape. Before turning full-time to photography in the 1970s, Adams was a literature professor, and in a recently published collection of inspiring essays, he reminds us that he has a way with words, eloquently making the case for the meaningfulness of art in a disillusioned society. Art Can Help contains over two dozen meditations on the purpose of art and the responsibility of the artist. In particular, Adams advocates art that evokes beauty without irony or sentimentality, art that “encourages us to gratitude and engagement, and is of both personal and civic consequence.” We recently had the great pleasure of corresponding with Mr. Adams and asking him a handful of questions about the book.

Yale University Press: Within your consideration of art as a source of both beauty and moral fortification, how does taking in the art of others differ for you from the creative process of making your own art?

Robert Adams: They’re similar in that both arise from the need to find a way to accept and find meaning in the crooked old world, but trying to make art is harder. Photography, which I know best, looks like a relatively passive activity, but it takes full-on, nonstop attention. For every time you release the shutter there have been many searches through the finder, sometimes for hours.

YUP: What role should one’s personal history and nostalgia play in communion with a work of art?

RA: Art should, I think, repeat in fresh ways what we already know. If it doesn’t do that — bring us back to ourselves — it’s just a diversion. Diversion is okay in small amounts — we need relief — but more than a little is addictive.

Unlike philosophy, art invites being tested against personal experience. It’s a concretized universal, a generalization presented in terms of specifics, and we naturally ask if the specifics are recognizable. Are they believable? Are they likely in terms of what we know?

About nostalgia, one of the meanings is “homesickness,” a familiar condition and one at the center of much of the greatest art. Odysseus wept when he finally saw Ithaca.

YUP: What did you mean when you wrote that “full realism comes at the expense of another kind of clarity”?

RA: I had in mind clarity about unprovable truths, clarity about a coherence beneath life’s broken surface. Full realism doesn’t go deep enough.

Clarity in art is a simplification in favor of form. Successful art is always to some degree an abstraction, a sorting out in order to record intuited shape and meaning.

YUP: Many of the meditations in Art Can Help focus on works that are poised between hopefulness and hopelessness. What would you say about an image that evokes pure hopelessness, or one that captures pure, unbridled joy? Are there such images that are, at the same time, art?

RA: Yes, there are great pictures that escape any definition of the word.

The reason, however, that I keep trying to find working generalizations about art, at least as art has been historically defined, is that our situation as a society is so perilous, and people go to art museums looking for help and don’t find much of it in contemporary art. Pavarotti remarked to Charlie Rose that “the purpose of art is to help alleviate suffering,” and with the truth of that in mind it seems to me that it is impossible to assert, as is commonly done now by the art establishment, that art is anything that gets on a museum wall.

What I would suggest, on the evidence of the work that we treasure the most — work by Piero della Francesca, Rembrandt, Cézanne, Matisse, Stieglitz, Hopper — is that art at its best is metaphor in the service of both truth and hope, of fact and possibility.

Often it’s a close thing, of course. There can be art that seems, almost to the last breath, pitch dark, like the last act of King Lear. But there is in great art, inexplicably, an end beyond the end.

In the case of pictures that are of irredeemably hopeless scenes, of which we have a great many — the photograph, for example, of the police officer in Saigon shooting a captive in the side of his head — I think of them as journalism. They’re often important, and making them is often courageous, but they serve other ends than those of art.

About works of unalloyed joy — some of William Blake’s illustrations, for example — they run the risk of appearing naive, but most of us have experienced joy. So the question for an artist is how to acknowledge a wider context, one that identifies joy as a minority experience, even while establishing, perhaps, that minority experience can sometimes carry the day.

Robert Adams lives and works in northwestern Oregon. He is best known for his series of photographs that explore the urban and natural landscapes of the American West.