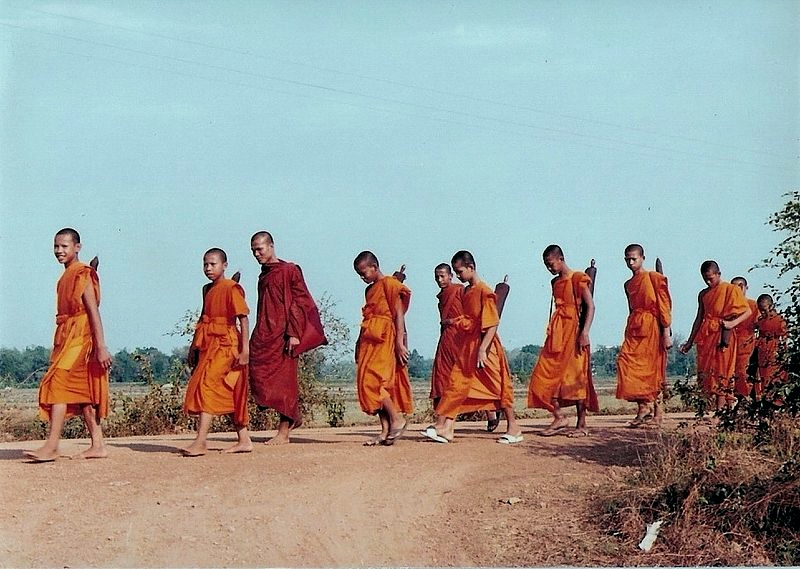 It took me a year to sort through volumes of Thai religious journals in the sometimes sweltering halls of Bangkok’s monastic libraries, where the few Western researchers sat elbow-to-elbow with saffron-clad monks. That research laid the groundwork for what I had begun to envision as an international history of postwar Buddhism examining Thailand’s well-traveled Buddhist hierarchy and its relations with other Southeast Asian monks. But it was only in the more comfortable confines of the Hoover Institution Archives in California that materials gathered in Bangkok began to connect into a larger narrative, one that also encompassed US engagement with the postwar Buddhist world.

Among the Hoover Institution’s collections are the records of the Asia Foundation, the organization that served as the main vehicle for Washington’s clandestine Buddhism programs. Documents held there reveal the foundation’s inner workings during the crucial decades of the 1950’s and 60’s, when US policies toward Buddhism were conceived and put to work on the ground. Their purpose was to broaden and reform the monkhoods of Thailand and neighboring Buddhist countries through community activities and international exposure. The overarching goal was to use Buddhist hierarchies in the Southeast Asia region–then the world’s fiercest Cold War theater–as anti-communist bulwarks.

While many of the Asia Foundation files are cited in the book, the most visually striking document found among them fell on the proverbial cutting room floor, excluded because of space constraints. This is a map entitled “Wake Up Buddhists,” possibly created in early 1966. The map depicts Thailand and Sri Lanka as Asia’s last remaining bastions of “strong” Buddhism. In other Asian countries, according to the map, Buddhism was severely threatened by communism, if not already “destroyed” by it, as in China and Tibet. 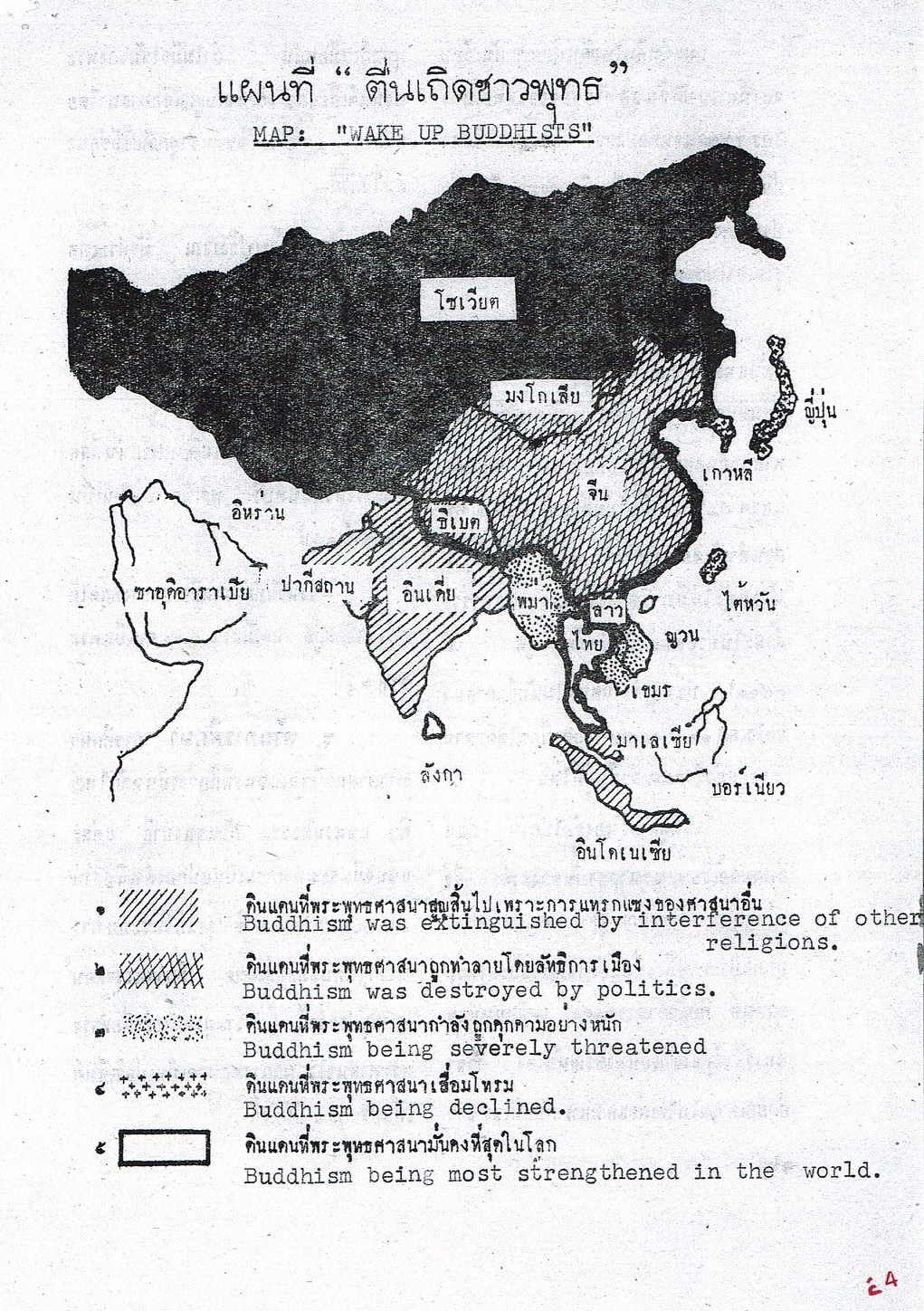 There are several points of interest about the map:

First, it illustrates how Thai and Asia Foundation officials ascribed a special status to the Buddhism of Thailand, which they viewed as exceptionally resistant to political threats. This special characteristic related to the Thai monkhood’s supposedly greater detachment from secular politics than the Buddhist clergies of Thailand’s neighbors. Only the Buddhism of Sri Lanka—a country that has occupied a special place in the Thai Buddhist imagination as the land of “genuine Buddhism”—was equally as robust, according to the map’s creators (Thongchai Winichakul, Siam Mapped: A History of the Geo-Body of a Nation, 27).

Second, the title of the map is notable when read as an exhortation for Buddhists of all nationalities to mobilize together to protect the faith. A pan-Buddhist consciousness that had emerged after World War II, with the establishment of groups like the Bangkok-based World Fellowship of Buddhists, was the medium in which such appeals to unity among Buddhist co-religionists could be made.

Third, the map is revealing when coupled with a second map created about 20 years later with the strangely resonant title, “Wake Up, Thai People.” Thongchai Winichakul reports that the second map dates from 1986, and that it was created under the sponsorship of a senior Thai Buddhist monk. He describes it vividly: “It is easily recognizable as the map of Thailand. On the eastern frontier is a picture of a soldier armed with full cartridge belts. His eye is glaring at the Thai map and his mouth is wide open as if he is intimidating–or going to devour–the map. Obviously he is a communist…The most striking feature of this soldier is his shape, which is drawn upon the figure of a combined map of Vietnam, Cambodia and Laos” (Thongchai, Siam Mapped, 168). 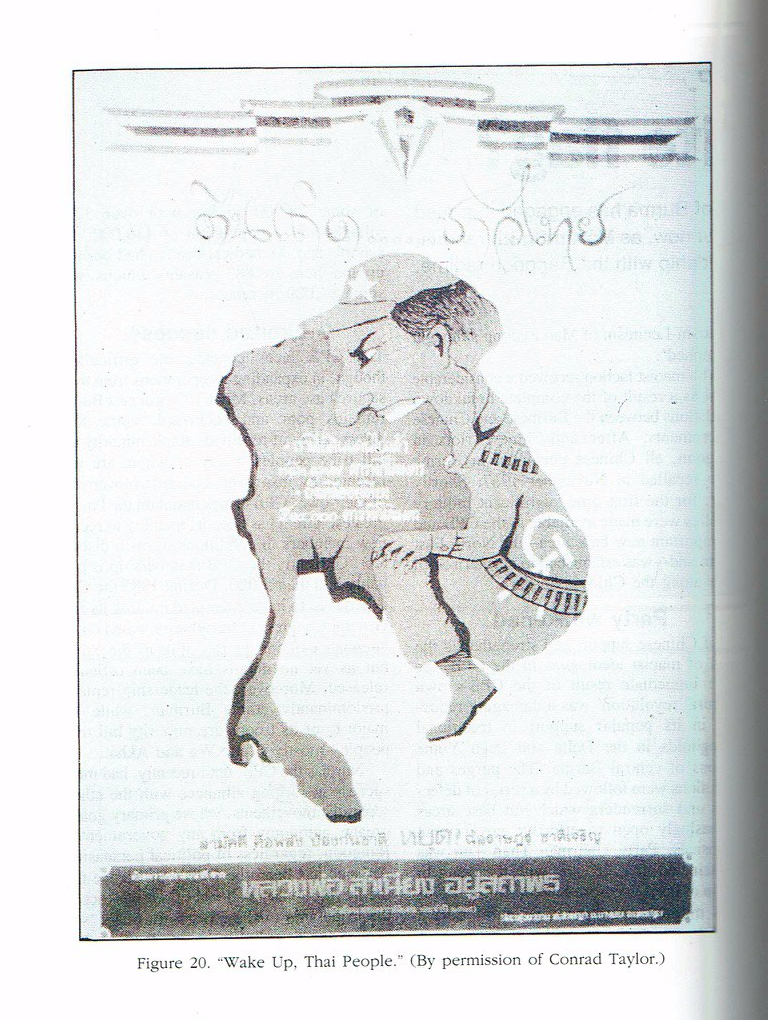 When paired together, the two maps signal how the thinking of Thailand’s Buddhist leadership evolved during the two decades that spanned their creation. The intervening years had witnessed the fall of Indochina to communist governments, heightening the perception of a dire external communist threat to the kingdom, and compelling influential elements of Thailand’s clerical leadership to explicitly embrace rightist politics. By 1986, as the map of that year depicts, inclusive appeals to all of Asia’s Buddhists to “wake up” to the threat of communism were no longer tenable, as neighboring lands had already succumbed to it. By then, as it appeared to some Thai Buddhist leaders, Thailand effectively stood alone.

Eugene Ford received a PhD in history from Yale University, winning the Arthur and Mary Wright Prize for an outstanding dissertation in the field of history outside the United States or Europe.

Map 2: Thongchai Winichakul, Siam Mapped: A History of the Geo-Body of a Nation (Chiang Mai, Thailand: Silkworm Books, 2004), figure 20. Photograph by Conrad Taylor. The author thanks Mr. Taylor for use of his photo and apologizes for being unable to contact him for permission because his whereabouts are unknown. 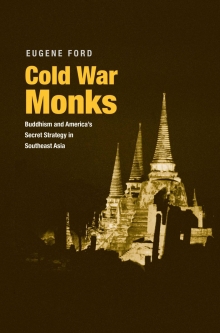