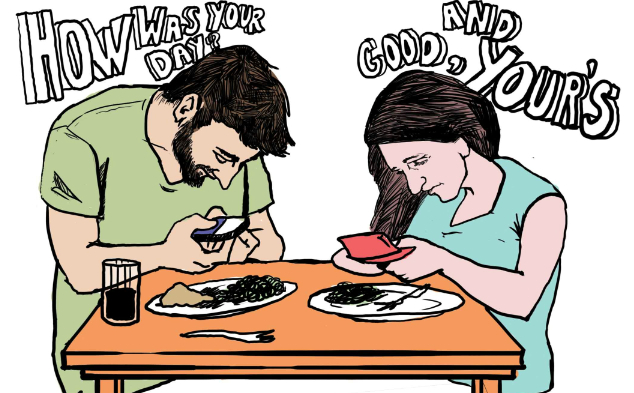 The podcast episode began with the teens hanging out, waiting for the interview to start. What did they do? They took pictures of themselves and posted them on Instagram. The story went on to describe how they spend much of their day posting pictures, commenting on them, or “liking” those of their friends. One of the girls noted, “Everyone’s always on Instagram,” and another chimed in, “There’s definitely a weird psychology to it . . . It’s just sort of the way it is. It’s like unspoken rules that everybody knows and follows.”

Later in the interview, they described their behavior as “mindless.” The host, Ira Glass, then asked an interesting question: “And so, since it’s mindless, does it still work? Does it make you feel good?” Despite one girl admitting, “I ‘like’ everything on my feed” (that is, she clicks the “like” button regardless of what the picture is), the teens all agreed that getting those likes still made them feel good. One concluded, “That’s, like, human nature.”

Even though they described their activity as rote and mindless, something about it was rewarding. Rats press levers for food. This trio presses buttons for likes. Perhaps this reward isn’t just about taking pictures, but is instead dependent on the subject of the picture—ourselves. Does this subject provide enough of a reward to keep us coming back for more?

Neuroscience may have insight into the human nature that these teens spoke of. Diana Tamir and Jason Mitchell at Harvard performed a simple study: they put people in a functional magnetic resonance imaging (fMRI) scanner and gave them the choice of reporting their own opinions and attitudes, judging the attitudes of another person, or answering a trivia question. Participants in the study repeated this task almost two hundred times. All the while, their brain activity was being measured. The catch was that the choices were associated with monetary payoffs. For example, in one trial, they might be given a choice between answering a question about themselves or about somebody else, and earn x dollars for choosing the former versus y dollars for the latter. The amount of money was varied, as was the category with which the bigger payoff was associated. At the end of the study, once all the payoffs had been tallied, the scientists could determine whether people were willing to give up money to talk about themselves.

And they were. On average, participants lost an average of 17 percent of potential earnings to think and talk about themselves! Just think about this for a second. Why would anyone give up good money to do this? Not unlike people who forgo job and family responsibilities because of substance abuse, these participants activated their nucleus accumbens while performing the task. Is it possible that the same brain region that lights up when someone smokes crack cocaine or uses any other drug of abuse is also activated when people talk about themselves? In fact, the nucleus accumbens is one of the brain regions most consistently linked to the development of addictions. So there seems to be a link between the self and reward. Talking about ourselves is rewarding, and doing it obsessively may be very similar to getting hooked on drugs.

A second study took this one step further. Dar Meshi and colleagues at the Freie Universität Berlin measured volunteers’ brain activity while they received varying amounts of positive feedback about themselves (or about a stranger, as a control condition). As in the Harvard study, they found that participants’ nucleus accumbens became more active when receiving self-relevant feedback. The researchers also had the participants fill out a questionnaire that determined a “Facebook intensity” score, which included the number of their Facebook friends and the amount of time they spent on Facebook each day (the maximum score was more than three hours a day). When they correlated nucleus accumbens activity with Facebook intensity, they found that the amount that this brain region lit up predicted the intensity of Facebook use. In other words, the more active the nucleus accumbens, the more likely someone was to spend time on Facebook.

A third study, by Lauren Sherman and colleagues at UCLA, topped this off by measuring adolescents’ brain activity while they were viewing a simulated Instagram “feed” consisting of a string of pictures they submitted, as well as those of their “peers” (which were provided by the research team). To mimic Instagram as accurately as possible, the picture feed displayed the number of likes that participants’ pictures had garnered. The twist was that the researchers had randomly split the pictures into two groups and assigned a certain number of likes to each one: many versus few. Because much of peer endorsement is online, and thus unambiguously quantifiable (for example, like versus no like), the researchers used this experimental manipulation so that they could measure the effect of this type of peer interaction on brain activity. This setup is different from face-to-face interaction, which involves bringing together context, nonverbal facial and body cues, and tone of voice (among other factors), which together leave a lot of room for ambiguity and subjective interpretation. Questions such as “why did she look at me that way?” and “what did she really mean when she said that?” are a constant source of teen angst. In other words, how does the clear, quantitative peer feedback that adolescents receive through social media affect the brain? In line with the first two studies, adolescent brains showed significantly greater activation in the nucleus accumbens as well as in a brain region implicated in self-reference.

The take-home message from these studies is that there seems to be something biologically rewarding about talking and getting (clear) feedback about ourselves—likely the same type of reward that drives the addictive process. YouTube is named YouTube after all.

Why would our brains be set up so that we get a reward when we receive feedback—or even just think about ourselves? Our teenage friends from the This American Life episode may give us a clue:

JULIA: “The brand. I’m the director of the—”

They then dove into a conversation about relevance. They joked about how they were “really relevant” in middle school because their social circles were set. Their social groups and friends were known, stable. The ground rules of social engagement were established. There was little ambiguity—at least, as little as there can be in a teenager’s mind. But at three months into high school, their circle of friends and their social groups were uncertain, up for grabs. As Glass put it, “There is a lot at stake.”

This conversation about relevance seems to point to the existential question, do I matter? Framed from an evolutionary standpoint, the question relates to one of survival: does “do I matter” equate to an increased likelihood of survival? In this case, the survival is social—improving one’s position in the pecking order, not being left out, or at least knowing where one stands in relation to others. When I was in middle school, seeking peer approval certainly felt like a life-or-death survival skill. The uncertainty of not knowing whether I was going to be accepted by a certain group was much more nerve-racking than simply being known, regardless of how popular the group was. Having clear feedback staves off the angsty questions that keep us from sleeping at night. As with the examples involving Facebook or Instagram, it may be that social survival can be meted out through the simple “rules” of reward-based learning, which were evolutionarily set up to help us remember where to find food. Each time we get a thumbs-up from our peers, we get that jolt of excitement and then learn to repeat the behaviors that led to the like. We have to eat to live; our social food may taste like real food to our brain, activating the same pathways.

From The Craving Mind: From Cigarettes to Smartphones to Love – Why We Get Hooked and How We Can Break Bad Habits by Judson Brewer, published by Yale University Press in 2018. Reproduced with permission.

Judson Brewer MD PhD is a thought leader in the field of habit change and the “science of self-mastery,” having combined nearly 20 years of experience with mindfulness training with his scientific research therein. He is the Director of Research at the Center for Mindfulness and associate professor in Medicine and Psychiatry at UMass Medical School. He is also adjunct faculty at Yale University, and a research affiliate at MIT. He has published numerous peer-reviewed articles and book chapters, spoken at international conferences, trained US Olympic coaches, and his work has been featured on 60 Minutes, TED (5,000,000+ views; top 10 talks of 2016), TEDMED, TEDx, Time magazine (top 100 new health discoveries of 2013), Forbes, BBC, NPR, Businessweek and others. A psychiatrist and internationally known expert in mindfulness training for addictions, Brewer has developed and tested novel mindfulness programs for habit change, including both in-person and app-based treatments (e.g. www.goeatrightnow.com, www.cravingtoquit.com). He has also studied the underlying neural mechanisms of mindfulness using standard and real-time fMRI. His work has been funded by the National Institutes of Health, American Heart Association, Fetzer Trust among others. 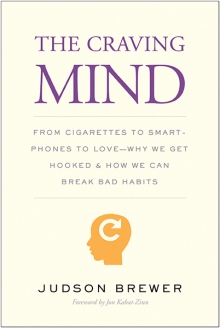