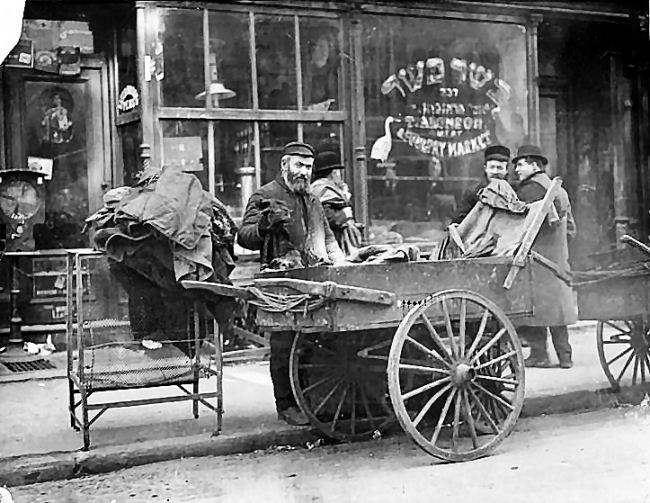 Nearly every place the immigrant Jewish peddlers went, with the exception of the British Isles and Scandinavia, they stumbled into societies in which color mattered. In some places—Canada, South Africa, Australia, and New Zealand—the color divide followed a native-versus-European colonist divide. Where one stood across the native-European chasm shaped life choices, economic opportunities, and political participation. The United States, the countries of the Caribbean, and much of Latin America fissured along a tripartite color spectrum. Those of European lineage held all or nearly all political and economic power, while African slaves and their descendants, as well as the native peoples and other nonwhites, contended with powerlessness, economic deprivation, and lack of meaningful (or any) citizenship. Immigrant Jewish peddlers came to places where their whiteness, as defined by custom and law, facilitated their migrations and made their peddling fundamentally successful.

While the Jewish peddlers, including those who emigrated from the Muslim lands, benefited from being white, they sold to everyone and anyone. White, black, or tawny, it made no difference: customers were customers, business was business. The color of the customer’s skin mattered not at all to the peddler who exchanged goods for cash. Sales to Native Americans and African Americans did not cause white customers to refuse to do business with Jewish peddlers, nor did it stymie the peddlers’ trajectory from the road to sedentary and respectable commerce.

In some places Jewish peddlers sold to independent farmers and their families. Outfitted with backpacks, peddlers made their way throughout the United States, Canada, Australia, and southern Africa, going to farmsteads widely separated by space. The farmers relied on the peddlers, as primitive roads and vast distances kept them from markets. The peddlers offered household goods, clothing, and other items that enhanced life in isolated settings. In other places, immigrant Jewish peddlers sold to people who lived and worked in servile or semiservile work situations. They made their way onto cotton plantations in the American South worked by slaves. This literally captive clientele, many of whom had no clothes or household goods of their own choosing, could enhance either what they wore or how they furnished their meager quarters by buying what the peddler carried.

Even larger numbers of Jewish peddlers came to the southern United States after slavery, when emancipation created great opportunities for them to sell to both whites and African Americans, the families of the tenant farmers and the hired hands who worked the plantations. The South provided masses of customers to Jewish peddlers among the women and men who worked in the textile mills and furniture factories of Georgia and South and North Carolina, poorly educated and desperately poor laborers. The peddlers provided them with an alternative to the stores owned by landowners and factory owners.

Jewish immigrant peddlers opted to go to places where men and women made their living, however minimal: in logging and mining camps, and on plantations, such as those in South and Central America that produced rubber, coffee, and sugar. When the United Fruit Company, owned by a former Jewish peddler to the American South, Sam Zemmuray, opened its massive banana plantations on the north coast of Honduras, Jews from eastern Europe flocked there to sell as itinerants to the workers. During the rubber boom in the Amazon of the late nineteenth century, one commentator noted that the region had been “overrun by Hebrew peddlers.”

Each of these enterprises concentrated workers who labored in gangs, under highly supervised conditions. Employers provided housing for the workers, made up of indigenous people recruited to labor after their own economies had been destroyed, former slaves and their progeny, and immigrants from abroad attracted by work and wages. To these workers, native and foreign born, Jewish peddlers provided the clothing and household goods that spelled the difference between a miserable existence and a slight step above that. The workers, laboring on a coffee plantation in Jamaica, harvesting sugar in Cuba or rubber in Colombia, experienced their first contact with a cash economy, learning how to use currency to pay for goods. Newly ushered into the capitalist way of life, these women and men who had previously functioned in barter economies learned about this new way of life from Jewish peddlers who taught them the meaning of money.

These places had much in common with the coal mines and steel mills of western Pennsylvania and West Virginia and the cotton textile mills that dotted the small towns of the Carolinas and of New Hampshire and Maine. They resembled, as far as the Jewish peddlers saw it, the dozens of Welsh iron and steel towns of the Merthyr-Dowlais region, and the mining towns that dotted the Rhondda and Cynon Valleys of Wales in the 1870s. Situated in nonurban regions, these areas depended upon the mines and mills, where masses of workers spent their days churning out coal and steel, tables and textiles. The laborers in turn bought the goods that the peddlers carried.

Nearly all of these areas grew out of “rushes” and “booms,” the gold and diamond rushes of South Africa, New Zealand, and Australia, the rubber rush of the Amazon, the coal rush of mid-nineteenth-century Pennsylvania and West Virginia, the California Gold Rush of the 1840s, as well as the rubber boom of the Amazon. Just as Jewish peddlers followed the shifting frontier in the United States, moving from western New York and the Middle West to New England, the Deep South, and the prairie states to the Pacific Northwest and the Southwest, they learned about the discovery of gems and minerals unearthed in faraway places. The Jews did not flock to these places to descend into the mines or to pick up axes and hew the trees in the logging camps. For the most part they did not plan to grub a stake and pan for gold. Rather, they saw golden opportunities in hefting packs on their backs, filling them with sundry goods, and going from camp to camp, mine to mine, mill to mill, selling to those who did the actual labor.

Hearing the news of one rush or boom or another, potential Jewish immigrants activated their communal networks and headed out to new regions of the world, whose people constituted their greatest resource. The men and women who wanted low-cost goods and could pay for what they bought drew the peddlers across oceans and landmasses. It mattered little what kind of place they went to. They did not care particularly if they took their first new-world steps on the roads of more or less advanced countries, or if they opted for tropical, subtropical, or temperate climates. They functioned pretty much the same whether they went to places like the United States, which drew in millions of other immigrants, or Ireland, Wales, Jamaica, or Chile. Wherever they went, they perforce relied upon other Jews to get them started.

From Roads Taken: The Great Jewish Migrations to the New World and the Peddlers Who Forged the Way by Hasia R. Diner, published by Yale University Press in 2018. Reproduced with permission. 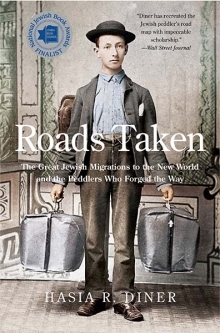