“Since no one was instructing me in religion, it occurred to me I needed one, and I made one for myself. ” – George Sand, History of My Life

George Sand (1804-1876) is known to modern readers as a symbol of feminism, a woman who challenged patriarchal values through her writings and her life.  Sand left her husband, took multiple lovers, dressed like a man, smoked cigarettes, and wrote novels, essays, and plays in which she defined herself apart from the social conventions that oppressed women.  All of this is true, but there is another dimension to Sand’s quest for liberation that is less well known, though it was central in her life.  Sand’s autobiography, letters, and novels show her to be a spiritual seeker, on a quest for religious principles that would satisfy her mystical sensibility, her political and social ideals, and her desire for autonomy.  Sand was a revolutionary figure who forced her contemporaries to rethink what it meant to be a woman, but through her life and writings, she urged them to rethink as well the nature of God, his relationship to humans, and his role in history.

Sand’s unconventional religious journey began when she was a child raised by a Voltairean grandmother on an isolated estate in central France.  It was there, she recalled in her autobiography, that lacking a religion she “made one for myself.”  Sand’s childhood religion revolved around an androgynous God she named ‘Corambé,’ who inspired stories told to herself in which the god/goddess charmed and consoled those who suffered.  Sand also received some minimal instruction as a Catholic, enough to satisfy the local priest that she could receive her First Communion.  But it was only at a convent school in Paris, where she spent three years as a teenager, that Sand began to take seriously her Catholic faith.  After a period in which she embraced the ‘devils’ of the school, Sand was transformed by a mystical encounter in the convent chapel in which “a whirling whiteness” passed before her eyes.  Sand recalled a feeling of “indescribable sweetness” and a love that bound her intimately to God, “as if the insuperable obstacle that stood between the hearth of infinite warmth and the dormant flame had been swept away.”  When Sand’s grandmother learned of her religious conversion, and her desire to become a nun, she swept in quickly and took her back to Nohant, the family estate in Berry in 1820.

Sand’s grandmother died in 1821, and the following year she married Casimir Dudevant, a man of some personal charm, but with no interest in ideas and devoted to hunting and hard drinking.  Letters from this period show Sand was still a practicing Catholic, but beginning to question some of its ceremonies as “useless,” and acknowledging that “if I heard the voice of my conscience tell me to change my dogma, I would do it the next day. . . .”   Sand’s religious doubts developed alongside her growing disaffection with her husband, and the first of her amorous affairs.  In 1831 Sand left Casimir to pursue a life of writing in Bohemian Paris.  She visited her old convent school one last time soon after her arrival, but her path was now out of the Catholic Church, but with no clear destination.

Over the next few years, Sand became a celebrity, known first of all for her novel, Indiana (1832) in which she used her own life as the basis for a critique of the subservience of wives in conventional marriages.  She became known as well for her personal style and passionate affairs, most famously with Alfred de Musset.  But throughout this turbulent period, Sand continued to be preoccupied with religious questions as well, displayed in her two philosophical novels, Lélia (1833) and Spiridion (1839).  In Lélia Sand tells the story of a woman torn by attachments to several men, and by her desire to transcend earthly concerns, a failed effort since the novel concludes with Lélia being strangled by Magnus, a crazed Catholic priest.  Sand’s religious despair runs through her private notebooks as well, interwoven with her fraught reflections on her relationship with Musset.  At one point she fled to the church of Saint-Sulpice and thought she heard a voice calling her to confess, a faint echo of her mystical experience at the convent school.

Lélia shows us Sand in the midst of a religious crisis; Spiridion reveals how she emerged from despair and created a new religion of hope and progress, in which men would be reconciled with each other, and with God.  Sand did not make this journey alone and was inspired by a number of fellow travelers – the Republican lawyer Michel de Bourges, the renegade Catholic priest Felicité Lamennais, and the socialist Pierre Leroux.  All of them sought a religion that would combine a commitment to human flourishing, social equality, and a moral code inspired by Christ’s teachings.  In Spiridion Sand tells the story of a Benedictine monastery founded by Spiridion, a Jew who converted first to Protestantism and then to Catholicism before ending his life committed to a religion of justice and peace that was only beginning to emerge.  The nature of God is left vague in Spiridion, as is the ultimate fate of individual humans.  Sand was, however, drawn to the fashionable idea in this period of progressive reincarnation on other planets.  But on his deathbed, Spiridion preaches a gospel of tolerance that leaves the individual conscience free to choose whatever religion provides the spiritual satisfaction that humans crave.

Sand lived a long life, but she remained committed to the religious principles that she adopted in the 1830s.  In her letters to Gustave Flaubert towards the end of her life she fought back against her friend’s pessimism, affirming her belief in a God who oversaw progress towards a better future.  Sand’s religion of humanitarianism reflected her own spirit of goodwill and generosity, but also the religious struggles she confronted as a young woman in the 1830s.

Thomas Kselman is professor emeritus of history at the University of Notre Dame and a former president of the American Catholic Historical Association. 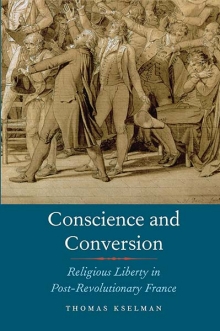