We Americans aren’t creating new businesses with employees at the rate we once did. The formation of new employers has fallen below its replacement rate and many policymakers and pundits have become worried. Lesser entrepreneurship would mean a more rigid economy, less able to respond to shocks. New technology would spread through the economy more slowly, and productivity would slacken. Labor markets would adapt less well to recessions and recover with greater delay during expansions. A decline in entrepreneurship would mean less employment for Americans, and lesser opportunities for economic advancement.

Many in the chattering class have seen the data on new employer firm formation rates and are sounding an alarm. They are calling for a multitude of “solutions,” from issuing start-up visas to boosting entrepreneurial education to changing the tax code to cutting regulation to making access to credit easier. The list goes on and on. One after another, blog posts and articles and papers call for a different government intervention to fix what the Beltway crowd is concerned is a collapsing entrepreneurial system.

There are several issues with this rush to offer up solutions. The first is identifying whether there really is a problem. Sure, one indicator of entrepreneurship doesn’t look so hot these days.  But do the other measures agree? Not really. In 2013, 12.7 percent of before-tax family income came from what the Federal Reserve calls “business activity”, its measure of ownership of private companies. That’s up from 10.9 percent in 1989. Internal Revenue Service data reveal that the fraction of individual tax returns with the self-employment tax deduction rose from 9.7 percent in 1990 to 12.8 percent in 2013. The IRS numbers also indicate that there were 57.2 American businesses for every thousand Americans in 1980. In 2012, there were 104.4. Since other data tell a different story from that recounted by Census Bureau data on employer business formation then maybe we shouldn’t rush to conclude that American entrepreneurship is in decline from a single measure.

The second is the tendency for those in Washington to view complex questions like the rate of growth of new ventures in the economy as simple problems with easy solutions. What’s happened with entrepreneurship in this country is likely more complex than the inside-the-Beltway folks believe, and cannot be easily fixed by simple policy changes like deregulation, cutting taxes or issuing immigrant visas.

To figure out the right solution, we need to look carefully at what has happened and not happened. Only after that, should we start offering solutions. And those solutions should be carefully explored because every proposed solution will have unintended consequences.

Those sounding the alarm are not completely wrong. There are some clear measures that should concern policymakers.  Americans have cut back dramatically on starting new businesses with employees. But other data tell a different story. Americans haven’t stopped creating companies. A higher percentage of Americans than ever before own their own businesses as data from the Internal Revenue Service shows. And business equity now accounts for a higher percentage of the net worth of American families than it did in the late 1980s the Federal Reserve finds.  Americans, it turns out, are creating and running businesses at a higher rate than they used to—but that business creation and management activity is growing primarily among businesses without employees.

High potential start-ups are doing very well, indeed. More start-ups are getting angel and venture finance than did a decade or two or three ago.

And it isn’t just a handful of new companies that are doing better than several decades ago. Older small companies—the ones that entrepreneurs have been running for many years have drastically improved fortunes. Business failure rates are down and earnings are up in inflation-adjusted terms, as compared to the 1980s.

The message of the pundits and the policy makers echoing through the blogosphere is too simplistic. American entrepreneurship isn’t in decline. But it has changed in many ways. Whether that transformation is positive or negative requires more discussion than can be provided in a blog post.

The story that emerges from holistic approach to the data is no less interesting than the bold headlines in the online articles. But it is more complicated. In a nutshell, entrepreneurship per se is not in decline in the United States. Business ownership in America is growing and existing small businesses are more likely to survive than they once were. High potential businesses are doing just fine.

Scott A. Shane is the A. Malachi Mixon III Professor of Entrepreneurial Studies at the Weatherhead School of Management, Case Western Reserve University. 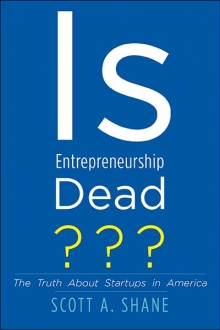