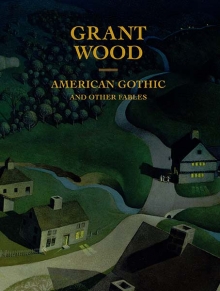 We recently had the great pleasure of interviewing Barbara Haskell, American art historian and curator at the Whitney Museum of American Art.  She curated the current exhibition, Grant Wood: American Gothic and Other Fables, and edited the accompanying book.

Yale University Press: Grant Wood hasn’t had a major exhibition in New York since the Whitney’s “Grant Wood: The Regionalist Vision” in 1983.  How did you think about presenting this artist’s work to a city that hasn’t been largely exposed to him in over 40 years?

Barbara Haskell: The initial goal was to look at a figure who hadn’t been looked at in decades.  Because American Gothic is such an iconic picture, but Wood’s other work is relatively unknown, it seemed worthwhile to mount a show of the full range of his art.  My process as a curator of discovering who Grant Wood actually was, and what the enduring power of the work is, has been echoed by visitors to the exhibition who encounter a much more complicated artist than they imagined. Contrary to popular perception, Wood was not a regionalist purveyor of straightforwardly bucolic, harmonious images of Midwest life in the 1930s. People coming to the exhibition immediately see this.

When I first began working on this show, I’d never thought deeply about Grant Wood’s work.  I confess to being guilty of seeing it exclusively as a manifestation of regionalism—I’d always put him in a category with Thomas Hart Benton and John Steuart Curry, as a proponent of the conservative representational style of regionalism in the 1930s.  All of a sudden, when I started really looking at Wood’s work, I began to notice its undercurrent of disquiet and alienation.  It suggested at least a partial answer to the question of “What makes Wood’s work so hypnotizing and mesmerizing?”  “Why have American Gothic and other paintings—Midnight Ride of Paul Revere and Daughters of the Revolution—remained so present in the public’s imagination?”  “What is it that accounts for their fascination?”  Armed with these questions, I started really looking at the work and the literature, reading everything that Wood ever wrote about his work, and reading what people had written about him.  He left a lot of clues, despite the fact that he was a man who was deeply invested in masking himself.  He created a persona of a plainspoken, cheerful, farmer-painter, while also leaving hints about his underlying attitudes that contradicted that public persona.  The autobiography he started but never finished ends—very tellingly—with the death of his father when Wood was 10, and the family’s subsequent move from their farm to Cedar Rapids.  As an adult, he described his experiences on the farm as being more powerful and clearer than anything he’d experienced thereafter. On other occasions, he talked about how the first 12 years of a person’s life impact their entire outlook thereafter—how they see everything through the lens of those 12 years.  I began to think, too, about other statements he made about feeling like an outcast in Cedar Rapids, which tallied with the perceptions of some of his best friends.  The poet Paul Engle, for example, talked about how Wood’s cheerful, homespun façade concealed a very troubled life.  Of course, any young man whose father dies when he’s 10 experiences a life-changing trauma, but for Wood it was especially traumatic because he never connected with his father.  He was a pudgy, nearsighted, effeminate boy, who described hiding under the kitchen table and drawing while his father and his two brothers were out working on the farm.   Wood seems to have masked his homosexual instincts—even to himself—but when you look at the work, you find erotic nude images of young men (and no images of nude women).  Being in Iowa in early decades of the 20th century, the son of a Quaker father, I don’t think he was able to admit to homosexual feelings, and that creates a tremendous tension in the work.  He pictorially sublimated his sexuality, particularly in the landscapes.  He also must have felt that, as an effeminate artist,

he had failed to live up to what was expected of him as the son of a Quaker farmer.  I believe that much of the alienation that is present in his work stems from his desire to celebrate a community that he was not totally part of.  In the self-portrait he made for the cover of his unfinished autobiography, The Return from Bohemia, he’s looking down at his easel, surrounded by family and friends who all have their eyes closed, not seeing him.  He’s both part of their world and simultaneously alienated from it. It’s almost as if he had tried in his art to re-stage a childhood that he didn’t actually live.  By pictorially re-imagining it, he could vicariously connect with something that was wonderful, harmonious, and ordered. This discontinuity between fact and fiction creates a tension that gives his work an eerie sense of make-believe; a chilling, frozen, airless quality.  This is part of what is so exciting for people today.  In taking a broader look at his art, American Gothic becomes more complicated, something more than a positive image of an archetypal rural or small-town American—it is that, of course, but it’s lots of other things, as well. What is mesmerizing is trying to resolve the meanings, which are numerous, and contradictory, and terribly compelling.  Its uneasiness holds our attention.

YUP: What do you think accounts for the ubiquity of American Gothic in popular culture, particularly in satirical and humorous modes?

BH: I think the humor stems from the fact that there’s something indisputably American about this painting and that whenever you substitute other people’s faces for the couple, the disparity instantly creates a sense of comedy.  The disconnect is between the American-ness the painting seems to represent and contemporary individuals.  It’s truly an American icon.

YUP: What effect does the current political climate have on evaluating an artist like Wood?

BH: When the show was first proposed, we had no idea that it would be so timely.  We didn’t know what would happen in American politics.  The issues that dominated Wood’s era—the populist rejection of elitism, the urban vs. rural divide, the sense that the “real” Americans live in the Midwest, that the country’s true values are rural—this is all front and center again now.  In this context, Wood’s work is a springboard for discussions about American values, American character, about who is a real American.  But today’s political climate has also created a sense of disquiet.  The surprise is that Wood’s work addresses this as well.  A lot of people coming to the show are caught off guard by how contemporary the work feels.  We’re such a transient nation—a nation of external and internal immigrants.  People are emotionally caught between two worlds; their loyalties are divided between two value systems.  It’s a very American experience.  Grant Wood was loyal to Cedar Rapids at the same time that he was alienated from it.

YUP: Grant Wood’s very carefully crafted public persona was as a farmer-painter.  To what extent do you think this image was devised by Wood or by his critics, or equal parts by both?

BH: Grant Wood was very effective at promoting his image as a plain-spoken, cheerful farmer.  One of his biggest mistakes in terms of this image was to sign his name to a pamphlet, called “Revolt Against the City” that argued for the primacy of rural over urban America. It contained many of the ideas Wood preached as he traveled around the country on lecture tours exhorting artists to stay home and paint what they knew.  The ideas were assembled into the pamphlet by Frank Luther Mott, who was the head of the journalism school at the University of Iowa, where Wood taught.  My guess is that Mott ghost-wrote the essay based on Wood’s ideas but also elaborated on them. The tone of the pamphlet is much harsher than what Wood would have expressed.  But since he didn’t disavow the essay, he became identified with its xenophobic nationalism and hostility to modernism. At about the same time Time magazine published a cover story in its December 24th, 1934 issue, featuring Thomas Hart Benton’s self portrait on the cover, that announced a new art movement coming out of the Midwest that was going to save American art from the deliberately unintelligible, outlandish works being made by artists under the sway of French Modernism.  The two publications together exacerbated the battle lines between the regionalists and the modernists—battle lines stoked by people associated with Wood, like Benton and the critic Thomas Craven.

YUP: Can you talk about Wood’s art beyond the paintings?

BH: One of the things that few fully appreciated before the show is Wood’s involvement with decorative arts.  He started out as

an arts and crafts artist.  He made beautiful silver pieces, and designed the interiors of houses and businesses. The corn cob chandelier, which has become a hit of the show, was from a commission to decorate the dining room of a hotel with Iowa corn imagery.  Wood derived from arts and crafts the notion that art should be part of everyday life, that it should be accessible to everyone, not just the elite.  In addition, the movement’s vocabulary—its geometric, stylized, organic forms and, decorative patterning—were features that he never lost.  When you look at his landscapes, it’s very clear that he’s channeling not only the ideology of arts and crafts—that art should be accessible to everyone—but also the movement’s patterning and decoration.

YUP: Grant Wood’s style changed dramatically over the course of his career – what were some of the influences that brought about his mature style?

BH: Wood was very influenced by regional literature.  One of his best friends was the Cedar Rapids poet Jay Sigmund.  They exchanged themes regularly: Sigmund would write a poem and inspire a Wood painting, and vice versa.  Sigmund shared the conviction of the editors of the influential regional journal, published in Iowa City, called the Midland, that the best writing comes from writers who write about the places and people they know best, the places and people where they live.  The combination of the Midland and Sigmund’s reproaching Wood for extolling the beauties of Paris and painting European-looking subjects were major factors in Wood  turning to Iowa for his subject matter.  Wood had a show in Paris in 1926 of his Impressionist paintings. The show was a disaster: few sales, no press.  This experience compelled him to reevaluate what he wanted to do as an artist.  And I think at this point the conversations about regional literature that he’d been a part of for years registered on him.  He returned to Iowa from this Paris trip and described seeing his mother standing in the doorway, wearing her apron, and realizing that this was his subject matter.  His final trip to Europe to fabricate a stained glass window in Munich reconnected him with the precision of his pre-Impressionist, arts and crafts years, and put him back in touch with a style that was more reflective of his personality than Impressionism.  When you look at the signature on his paintings, you realize that he was a very tight and controlled individual.  His epiphany was his realization that his proclivity for a precise, hard edge vocabulary and fidelity to facts was American—that it could be used to convey something unique about the Midwest.  His renewed appreciation for precision, paired with the subject matter of Iowa, gave Grant Wood his mature style.