It is 3 a.m. You awaken sweating, your heart pounding. Your mind is racing, reminding you that you have to get up early to drop the kids off at daycare, then dash to work for an important meeting. Obsessed with your personal and work issues, you eventually fall back asleep, only to be dragged awake by the alarm clock. You are cranky and yell at the kids, trying to rush everyone out of the house. By the time you get to the meeting, you have trouble paying attention; you can neither concentrate nor listen to others. You gulp down a second cup of coffee.

As you drive down the highway you feel an uncontrollable urge to shut your eyes. You turn on the radio, pop a candy into your mouth, and start to sing along with the radio. You roll down the window. Maybe you slap your face. But nothing seems to be working. You cannot overcome the urge to fall asleep.

If you have ever been affected by severe sleepiness, you are not alone. Every year, U.S. businesses lose an estimated $18 billion in productivity and injuries because of daytime sleepiness, while sleepy drivers cause an estimated 20 percent of car accidents, as high as 1.2 million crashes, resulting in thousands of deaths and injuries and billions of dollars in property damage. Research has also shown important links between the amount of sleep an individual gets and risk of health problems: reduced sleep may lead to obesity; women who sleep much more or much less than the average are at increased risk of disease. A study of 71,000 nurses published in 2003 showed that those sleeping five hours or less had a 45 percent greater risk of developing heart disease after ten years than those sleeping eight hours. Those sleeping nine to eleven hours increased their risk by 38 percent. Sleep disorders, ranging from mild insomnia to sleep apnea to narcolepsy, affect an estimated 50 to 70 million Americans.

Why do our bodies need sleep? All forms of life have periods of activity alternating with periods of inactivity, taking the form of either rest or sleep. The amount of sleep each lifeform needs, and its sleep schedule is controlled by its genetic blueprint—and we humans share some of our sleep-controlling genes with flies!

Yet despite the thousands of experiments scientists have performed to study sleep, no one has been able to declare with certainty why all lifeforms need sleep; we know only that when animals are prevented from sleeping they eventually die. It is possible that sleep serves different functions for different species. Most animals, for instance, spend their waking time looking for food, then retreat to a safe place to sleep and hide from predators. (Animals near the top of their food chain, such as lions, seem to sleep whenever and wherever they want.)

Some of the reasons suggested for why humans sleep include removal from the brain of waste material produced by brain cells, conservation of energy, the restoration of important bodily functions, and the repair of damaged tissues. Certain hormones, for example, are secreted mainly during sleep. The one thing scientists are certain of is that if people do not get enough sleep, their brains will not work properly; they will feel rotten, and they might find themselves unable to perform complex tasks. No one wants a sleep-deprived pilot flying a commercial jet across the Pacific. And even the medical profession now admits that doctors who are sleep deprived (a condition that used to be the norm among residents, who were on continuous duty for up to thirty-six hours and a hundred hours a week) are a hazard to their patients and their own health.

We can conclude that sleep serves many important functions, and different types of sleep serve different needs. For instance, scientists theorize that slow-wave sleep makes us feel refreshed upon awakening, while rapid eye movement (REM) sleep is connected to our ability to store memories in our nervous system. The right amount of sleep contributes not only to our ability to function but to how we feel. Sleep may, in fact, be, as Macbeth describes it, the “chief nourisher in life’s feast.”

From The Mystery of Sleep by Meir Kryger. Published by Yale University Press in 2017. Reproduced with permission.

Meir Kryger, M.D., is a professor in the Yale School of Medicine and chief editor of the most widely used sleep medicine textbook, Principles and Practice of Sleep Medicine. He is recognized as a global authority on sleep and has appeared on The Dr. Oz Show, CNN, ABC News, and BBC Radio 5. 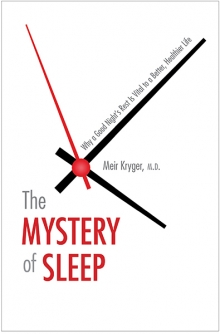