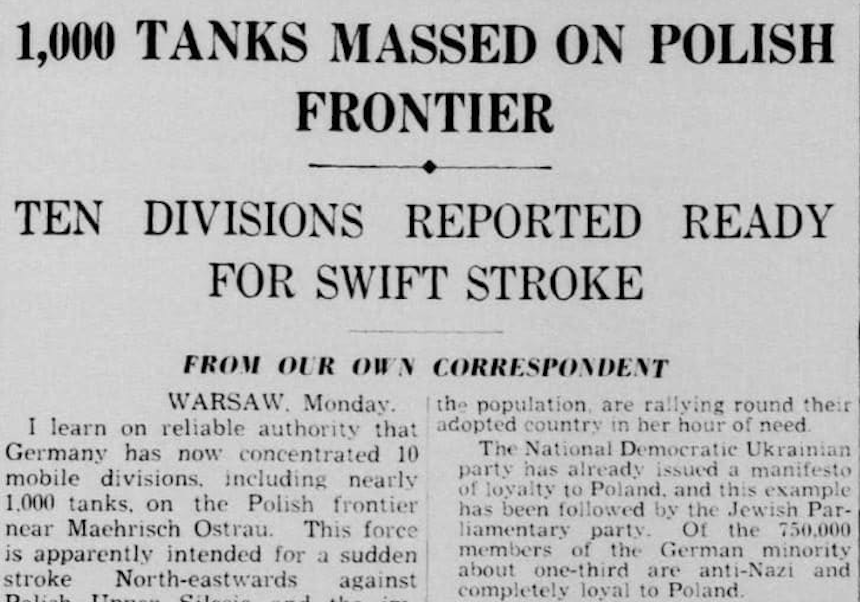 Lynn Heinzerling of the AP and George Kidd of UP shared the distinction of being the first correspondents to hear the opening shots of World War II. A few hours before the shelling of Danzig began, Heinzerling overheard a German officer in his hotel place an urgent 3:15 a.m. wake-up call and understood the implications of that. Roused from sleep at 4:47 a.m. by the shelling of the Westerplatte, Heinzerling later wrote: “It came rolling up from the harbor like the rumble of doom. Men began to die here as Hitler stepped out on the road to ruin.” Kidd also knew something was up and prowled the streets, then woke up the acting British consul, F. M. Shepherd, at 2:15 a.m. to tell him German correspondents were on the street, winding up movie cameras.

In Katowice, in southwest Poland near the German frontier, 27-year-old Clare Hollingworth was jolted awake by the sound of explosions. Then aircraft roaring overhead. Looking out a window, she saw German bombers and the flash of artillery fire coming from the border, less than 20 miles away. Hollingworth became the first correspondent to report on the war within earshot of the border. (With the alteration of Polish territory after the war, Katowice is no longer close to the German frontier.) A less probable journalist in the role could hardly be imagined. She had never written a news story before London’s Daily Telegraph hired her just seven days earlier to report on war from Poland, if it came. The fact she had previously worked for a refugee organization in Poland helped her land the job.

As shells and bombs exploded around her, Hollingworth telephoned Robin Hankey, a friend of hers at the British Embassy in Warsaw. “Robin, the war has begun!” she shouted. “Are you sure, old girl?” he responded. She held the phone out her bedroom window, and Hankey’s doubts vanished. He advised her to get out of the city.

Three days earlier, Hollingworth had scooped the world press with a report on the first solid evidence that Germany intended to invade. She borrowed the car of John Anthony Thwaites, the British consul in Katowice, and drove into Germany. A gust of wind lifted up hessian sheets strung alongside the road, revealing hundreds of tanks, armored cars and field artillery. Her story appeared on the Daily Telegraph’s front page on August 29 under the headline: “1,000 Tanks Massed on Polish Border, 10 Divisions Reported Ready for Swift Strike.” “The German military machine is now ready for instant action,” she wrote.

Now with action underway, Hollingworth telephoned Hugh Carleton Greene, the Daily Telegraph correspondent in Warsaw, at 5:30 a.m. After she dictated a dispatch to him, he phoned the Foreign Ministry. An official told him: “Absolute nonsense. We are still negotiating.” But as they spoke, air-raid sirens began wailing across Warsaw and bombs began to fall.

Hollingworth and Thwaites set out in his car for Krakow as German planes swooped down to rake the Katowice streets with bullets and bombs. The next day, determined to get to the front, she drove off in the car that Thwaites had generously put at her disposal. But the road was blocked with retreating Polish troops, dead and wounded soldiers, and horses. She turned back.

She and Thwaites set off for Lublin on Sunday, September 3, and heard on the radio that Britain and France had declared war on Germany. They were now enemy aliens, subject to arrest by the Germans. “It was the worst moment of the war for me and I felt slightly sick,” she wrote. On September 6, they drove from Lublin to Warsaw, only to find that all British subjects had left. They headed back to Lublin. “I had been really scared and now I was exhausted and hungry as I had not eaten all day,” Hollingworth wrote. But she had taken a bottle of champagne from Greene’s flat and they drank that before arriving in Lublin at 2 a.m.

Hollingworth decided to return to Warsaw. “I was not being brave—I certainly did not feel courageous—ignorant, perhaps, and naive,” she wrote in her memoirs. “My overriding feeling was enthusiasm for a good story, the story on the fall of Warsaw to the Nazi divisions. Who could resist that?” Her British colleague Cedric Salter wrote that she was “the most foolhardily brave journalist of all the Anglo- Americans in Poland.” She traveled alone, over roads jammed with refugees, while German fighter planes poured down machine-gun fire. Then she ran into a German army detachment. Paralyzed with fright, she sat watching the troops before she recovered and “drove madly” across fields, back to Lublin.

Hollingworth crossed into Romania on September 14 and filed a story. After a brief return to Poland, she told Greene that Russia had invaded Poland. “Nonsense,” he said. They went back to Poland but, seeing Russian tanks approaching, hastened back to Romania. She soon resigned from the Telegraph and joined the Daily Express.

From Reporting War by Ray Moseley. Published by Yale University Press in 2017. Reproduced with permission. 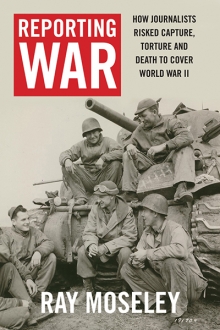 Featured Photo of Clare Hollingworth’s report in The Daily Telegraph on August 29, 1939