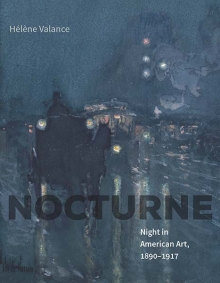 This spring, I had the luck to spend a few days in the Eolian archipelago off the coast of Sicily, in a house poised on the edge of a steep cliff overlooking the Mediterranean, with little in sight except the silhouettes of nearby volcanic islands. On my first night there, I went out on the terrace, hoping to catch a glimpse of Stromboli’s constant lava flow a few miles to the northeast. I was imagining a view similar to the paintings depicting eruptions that were a popular topic for Western artists (from America to Russia) from the late 18th century up to the mid-19th century. The volcano proved too far away to allow any of the smoldering light to show on the horizon, but I was taken by surprise by another, equally impressive spectacle, even though it could be considered a much more banal phenomenon than a volcanic outburst. While the sea presented nothing but a darkened haze, the sky above was a vast, quiet explosion of light. The obscurity was pierced by thousands of stars, twinkling like so many eyes playfully winking at me. The milky way deployed its immense arms, embracing more sky than I could see. Among this feast of light, constellations emerged into view like the familiar names and faces of forgotten friends. Hi there, Big Dipper. Long time no see.

It is so easy to forget the stars: our nights have become so much more, and so much less than them. Illuminating every minute of our days, and every corner of our lives has also changed the nature of night, plunging it into plain darkness. By turning on so many lights on our streets, in our homes, on our screens, we have turned off the ones scattered across the night sky. After over a century of electric lighting, from arc lights to LEDs, we are slowly becoming aware of this, and have come to consider light as a source of pollution. Today, non-profit organizations like the International Dark Sky Association work to build parks, reserves and sanctuaries to preserve darkness, showing its importance in the general preservation of the environment, and as a common heritage for humanity. That awareness has also been at the core of the work of artists such as Rachel Lee Hovnanian, who recently designed a project called NDD Immersion Room at the Leila Heller Gallery in New York City. Hovnanian’s installation, accessible to visitors only once they have locked away their electronic devices, reproduces the experience of a forest at night. The artist thereby encourages visitors to “sit with their solitude, and … find new, unmediated ways of relating to themselves and their surroundings.” Implicit in this reconstruction of natural darkness is the idea that there is a universal, eternal night with which we have lost touch, and that reconnecting with it will open the way for a new understanding of ourselves.

This is about us, not about night itself. If the stars shoot or glide across the sky, if they rise or fade, it is only in our eyes. We feel nostalgia at least as much for the image a lost night than for its reality. And actually, twenty-first century activists and artists are not the first to channel night’s potential for meditation, turning our attention away from technology towards a reflexive form of contemplation. The turn of the previous century saw a veritable craze for the “nocturne” in American art circles. Almost every major American artist attempted to paint night landscapes, while some artists even exclusively specialized in nocturnes. The great Winslow Homer, whose Maine coast paintings were attracting wide applause, painted more and more moonlit seas.

Frederic Remington, the Wild Western painter, started depicting cowboys and Indians at night. California painter Charles Rollo Peters gained renown as “the Prince of Darkness.” The crisp details of the Hudson River School landscapes that had been so successful in the previous decades gave way to blurred, empty visions exploring all the variations of the blue palette. The aesthetics of the nocturne owed a lot to the artistic innovations of American expatriate James McNeill Whistler, who had refashioned moonlight painting into an altogether new subgenre. True to Whistler’s art for art’s sake credo, most of the literature about nocturnes stressed their melancholy and mysterious qualities, considering them as paintings out of their time. On the contrary, I chose to question what this nostalgic imagery of the night said, specifically, about that period. What portrait of themselves were Americans seeing in these darkened views?

It is no coincidence the nocturnes became successful at the very moment night found itself radically transformed by the development of electric lighting. This was the time when electricity lit up world’s fairs, dazzling visitors with more light they had ever seen, and when Broadway in New York City was turned into a “Great White Way.” Rather than a universal experience, technology was proving night to be historically defined. Suddenly artists found themselves nostalgic for a night which they realized was doomed to disappear. The night imagery that was so successful with audiences, however, had to be more than the attraction of a pre-technological past. Beyond the immediate context of electricity, night acted as a powerful metaphor in the culture of the time. From the dark continent of imperialism to that of the unconscious, the symbolic values of night were pervasive, expressing at once distrust for and fascination with the new experiences with which Americans were confronted on a daily basis. Discoveries such as that of the X-rays, for instance, blurred the lines between the visible and the invisible, and between scientific knowledge and more obscure beliefs. Darkness was now part of the knowable world. Night proved a convenient image to illustrate the fate of American Indians, who by 1890 were considered as part of a nostalgic past.

When Frederic Remington changed his illustrations of the Frontier into melancholy nocturnes, he managed to confer his paintings the elitist varnish they had lacked so far, but he also created images that resonated with the contemporary idea of the “Vanishing Indian.” Night imagery also helped address new urban realities, contrasting one part of the population with its “other half,” and allotting each of them one half of the daily cycle, one half of the urban space. For fin de siècle Americans, night was an endless source of meaningful images.

For many artists, the choice of night was an elitist and reactionary move. Protesting against what some called the “tyranny of the pictorial,” nocturne artists strove to differentiate themselves from the bright and sharp imagery that flooded the everyday lives of Americans, strategically aiming for distinction through indeterminacy. Yet their formal vagueness was often paired with ideological ambiguity. Nocturne paintings were for instance extremely ambivalent about race: while nocturne artists were most often white upper-class males and while their art was considered the epitome of white civilization, in racist discourses night and darkness were the domain of racial others. Nocturnes at once covered and gave visibility to non-whites, and they often suggested that the distribution of light and darkness was highly versatile. This fluidity of meaning enabled a form of accommodation to modernity. In general, while they displayed a melancholic attachment to a bygone vision of America, nocturnes also paradoxically helped issue forth newer visions. The nocturne form, for example, offered a way to reconfigure the urban landscape as a whole. With obscurity and artificial lighting altering distances and perspectives, nocturnes offered an opportunity to redefine the conventions of the American sublime landscape and to adapt it to the abstract, evanescent and chaotic environment of the modern metropolis. Though they initially used obscurity to keep the manifestations of modernity at bay, nocturne artists ultimately opened the way for modernist approaches to the depiction of the American landscape that were to dominate the 20th century. The night they deployed on canvas became less a brooding vision of the past than a space for experimentation. To some extent, immersing themselves into obscurity was for Americans artists a way to find themselves anew.

Hélène Valance is assistant professor at the Université de Franche-Comté.  Her book Nocturne: Night in American Art, 1890-1917 is the winner of the inaugural Terra Foundation for American Art  / Yale University Press American Art in Translation Book Prize.  Click here for more information about the prize, which is currently accepting new proposals and letters of inquiry.