The fur trade in North America was an important part of the continent’s economic and social evolution. For better and for worse, from the sixteenth to the early twentieth centuries, the fur trade caused changes in Native American societies. It provided wealth but simultaneously pushed the boundaries of the borderlands farther west and north.

In the sixteenth century this trade was primarily carried out by European traders in the coastal regions bordering the Atlantic Ocean, but soon the trade advanced inland via river systems. And by the beginning of the nineteenth century, it had grown to include Russian and Spanish traders, as well as American and British maritime merchants, who, on the West Coast, sought sea otter skins for the trade with China. One result was Native American nations’ participation in the trade throughout the continent as an outgrowth of their traditional exchange systems.

Nevertheless, the peoples of the Western Arctic became active participants in the global fur trade only in the late eighteenth century, when Russians established a trade fair in Chukotka, 4,000 miles east of European Russia and 800 miles west of Bering Strait.  Soon after, the Hudson’s Bay Company (HBC) established a trading post on the lower Mackenzie River. Three decades later, the Russian-American Company built a fortified post in Alaska near the mouth of the Yukon River, an initiative that was followed quickly by the HBC’s further advance northward. By the middle of the nineteenth century, a greater abundance of foreign goods became available with the arrival of the whaling and trading fleets of the United States, France, Germany, Hawaii, and Australia. Native middlemen filled the gap between the coastal trade and the trading posts, and throughout the region, manufactured goods changed hands many times in return for furs, walrus ivory, whalebone, and other products—commodities that were ultimately carried to markets in Asia, North America and Europe.

In 1899 the inhabitants of the Western Arctic suddenly gained vastly increased access to manufactured supplies. The gold rush city of Nome sprang up near Bering Strait on Alaska’s Seward Peninsula and its resident fleet of small trading vessels spread throughout the region. Most important for the northerners was the nearly simultaneous discovery by the fashion industry of  decorative uses for arctic fox pelts in expensive garments. Merchants of San Francisco and Seattle quickly established posts in northern Alaska, while the Hudson’s Bay Company commenced operations on the Arctic Coast.

To exploit the growing market for white fox pelts, northern trappers quickly dispersed and set up camps along the entire coast. These northerners lived and trapped in one of the world’s harshest environments. At a time when government support and social services were minimal or nonexistent they, mostly thrived on the arctic fox trade, relying on their energy, training, discipline, and skills to provide a livelihood for themselves and their families in an industry that at every level—from the trapper to the retail furrier—was a hard-nosed, extremely competitive and unforgiving business.

The Western Arctic fur trade was one aspect of the European expansion into the most remote regions of Asia and North America. At times it involved the contest for dominion among foreign nations, but at its core was always the search for profit. Far beyond the Europeans and Americans who sought to buy furs, ivory, and other products in return for manufactured goods, members of Native nations traded these commodities to one another in return for goods they required or desired. Manufactured goods, coastal products, inland products, tobacco, tea, alcohol, and hundreds of other things changed hands many times in the vast region between the Kolyma River in Northeastern Asia and Canada’s Western Arctic. And no matter which goods were exchanged, these transfers were almost universally regarded as advantageous by both parties. The belief that the Native peoples were grossly exploited by foreign fur traders has long been maintained. However, the Natives of the region willingly participated in these exchanges. And on both sides of the exchanges they usually thought they were receiving a favorable reward—by whatever scale of values they chose to measure that reward.

The arctic fur trade brought profound changes to the peoples of the North, and it is difficult to overstate my admiration for those participants in the fur trade era in the Western Arctic. I hope to shed light on an important, complex, quickly changing, and largely forgotten era.

John R. Bockstoce is an independent scholar and author of award-winning books, monographs, and articles on the Arctic. He has worked at the Smithsonian, the University of Pennsylvania’s Museum of Archaeology and Anthropology, and the New Bedford Whaling Museum. 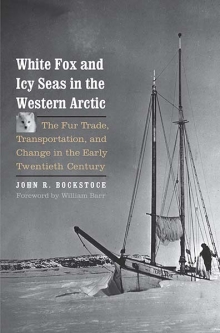 Featured photo: The schooner “Polar Bear” in winter quarters on the north coast of Alaska, 1914. Photo by Bernhard Kilian via the personal collection of John R. Bockstoce.