On the night of June 5, while most of the nation’s attention was focused on the results of California’s crucial “top two” primary, something unusual happened in the state of Alabama—and this time it didn’t involve Roy Moore. A Republican U.S. House incumbent named Martha Roby was forced into a runoff by a challenger who attacked her for withdrawing her support from Donald Trump a few weeks before the November election following the release of the infamous “Access Hollywood” tape in which the GOP presidential nominee was heard boasting about sexually assaulting women. Roby’s challenger, a former Democratic member of Congress named Bobby Bright, accused her of turning her back on the president “when he needed her most.” Many of the district’s Republican voters apparently agreed. Roby received only thirty-nine percent of the vote to Bright’s twenty-eight percent. She may well lose the runoff.

The results of the Alabama primary provided one more indication of a voting pattern that has been evident across the nation during 2018 in Republican and Democratic primaries and special elections: the central role that opinions of President Trump are playing in voter decision-making. There are good reasons to expect this to continue all the way through the midterm elections in November.

Elections in the United States have become increasingly nationalized over the past few decades. Whereas the late Democratic House Speaker Tip O’Neill famously proclaimed that “all politics is local,” today it would be more accurate to say that “all politics is national.” The outcomes of elections for the U.S. House and Senate, including many primary elections, are now strongly influenced by national political issues, especially opinions of the president.

In primaries and special elections this year, opinions of President Trump are having a major influence on voter decision-making and election outcomes. Democratic voters are frightened and angry with the President’s leadership. They are looking for candidates who oppose his policies and promise to check his power. Meanwhile, Republican voters remain highly supportive of the President. They are looking for candidates who agree with his policies and promise to defend him against allegations of misconduct that threaten his presidency. As a result, the primaries are setting up a major confrontation in November over the direction of the country and the future of the Trump presidency.

National issues, including the performance of the president, have always played a role in midterm elections. However, their influence is much greater today than in the past because of two closely related political developments: increasing partisan polarization and the rise of negative partisanship.

To a much greater extent than in the past, the divide between the Democratic and Republican parties reflects deep divisions in American society—divisions over race, culture and ideology. Moreover, because the divide between the two major parties is so deep, supporters of each party have become increasingly hostile and mistrustful toward the opposing party and its leaders. The result has been a growing tendency among voters to choose candidates for Congress (and even for state and local offices) based on their opinions of national parties and the president. Voters are more likely to choose members from the same party for all offices on the ballot rather than splitting their ticket based on opinions of individual office-holders and candidates.

The trend toward nationalization of voting behavior and elections seems to be intensifying in 2018, perhaps because President Trump is proving to be so polarizing. One piece of evidence for this comes from the special election for the House of Representatives that was held in March in the 18th District of Pennsylvania. In that election, Democrat Connor Lamb narrowly defeated Republican Rick Saccone in a district President Trump had carried by twenty points in 2016. According to a telephone exit poll of voters conducted by Public Policy Polling, there was almost a perfect correspondence between candidate preference and opinions of the president: ninety-five percent of Saccone voters approved of the job President Trump was doing while ninety-three percent of Lamb voters disapproved.

Even more than in past midterm elections, 2018 is shaping up to be a referendum on President Trump. In making their decisions, voters are reacting less to local candidates and their campaigns and more to the President and his policies. They are voting less for an individual to represent their state or district and more for a party that will either support the President or provide a check on him. As a result, to a greater degree than at any time in recent history, the direction of the nation is likely to differ dramatically depending on which party controls the House and Senate in 2019.

Alan I. Abramowitz is Alben W. Barkley Professor of Political Science at Emory University and a regular blogger on Larry Sabato’s Crystal Ball, which describes him as “one of the nation’s top experts on election modeling.” His most recent books include The Disappearing Center, Voice of the People, and The Polarized Public, and he is frequently quoted on political and election matters in the New York Times, Washington Post, and other media outlets. 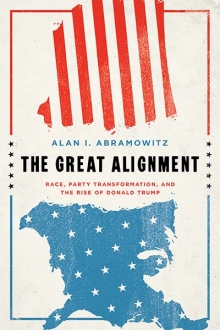