Historical humankind has been mesmerized by the narrative of progress and civilization as codified by the first great agrarian kingdoms. As new and powerful societies, they were determined to distinguish themselves as sharply as possible from the populations from which they sprang and that still beckoned and threatened at their fringes. In its essentials, it was an “ascent of man” story. Agriculture, it held, replaced the savage, wild, primitive, lawless, and violent world of hunter-gatherers and nomads. Fixed-field crops, on the other hand, were the origin and guarantor of the settled life, of formal religion, of society, and of government by laws. Those who refused to take up agriculture did so out of ignorance or a refusal to adapt. In virtually all early agricultural settings the superiority of farming was underwritten by an elaborate mythology recounting how a powerful god or goddess entrusted the sacred grain to a chosen people.

Once the basic assumption of the superiority and attraction of fixed- field farming over all previous forms of subsistence is questioned, it becomes clear that this assumption itself rests on a deeper and more embedded assumption that is virtually never questioned. And that assumption is that sedentary life itself is superior to and more attractive than mobile forms of subsistence. The place of the domus and of fixed residence in the civilizational narrative is so deep as to be invisible; fish don’t talk about water! It is simply assumed that weary Homo sapiens couldn’t wait to finally settle down permanently, could not wait to end hundreds of millennia of mobility and seasonal movement. Yet there is massive evidence of determined resistance by mobile peoples everywhere to permanent settlement, even under relatively favorable circumstances. Pastoralists and hunting- and- gathering populations have fought against permanent settlement, associating it, often correctly, with disease and state control. Many Native American peoples were confined to reservations only on the heels of military defeat. Others seized historic opportunities presented by European contact to increase their mobility, the Sioux and Comanche becoming horseback hunters, traders, and raiders, and the Navajo becoming sheep-based pastoralists. Most peoples practicing mobile forms of subsistence— herding, foraging, hunting, marine collecting, and even shifting cultivation—while adapting to modern trade with alacrity, have bitterly fought permanent settlement. At the very least, we have no warrant at all for supposing that the sedentary “givens” of modern life can be read back into human history as a universal aspiration.

The basic narrative of sedentism and agriculture has long survived the mythology that originally supplied its charter. From Thomas Hobbes to John Locke to Giambattista Vico to Lewis Henry Morgan to Friedrich Engels to Herbert Spencer to Oswald Spengler to social Darwinist accounts of social evolution in general, the sequence of progress from hunting and gathering to nomadism to agriculture (and from band to village to town to city) was settled doctrine. Such views nearly mimicked Julius Caesar’s evolutionary scheme from households to kindreds to tribes to peoples to the state (a people living under laws), wherein Rome was the apex, with the Celts and then the Germans ranged behind. Though they vary in details, such accounts re cord the march of civilization conveyed by most pedagogical routines and imprinted on the brains of schoolgirls and schoolboys throughout the world. The move from one mode of subsistence to the next is seen as sharp and definitive. No one, once shown the techniques of agriculture, would dream of remaining a nomad or forager. Each step is presumed to represent an epoch- making leap in mankind’s well- being: more leisure, better nutrition, longer life expectancy, and, at long last, a settled life that promoted the household arts and the development of civilization. Dislodging this narrative from the world’s imagination is well nigh impossible; the twelve- step recovery program required to accomplish that beggars the imagination. I nevertheless make a small start here.

It turns out that the greater part of what we might call the standard narrative has had to be abandoned once confronted with accumulating archaeological evidence. Contrary to earlier assumptions, hunters and gatherers—even today in the marginal refugia they inhabit—are nothing like the famished, one-day-away-from-starvation desperados of folklore. Hunters and gathers have, in fact, never looked so good—in terms of their diet, their health, and their leisure. Agriculturalists, on the contrary, have never looked so bad—in terms of their diet, their health, and their leisure. The current fad of “Paleolithic” diets reflects the seepage of this archaeological knowledge into the popular culture. The shift from hunting and foraging to agriculture—a shift that was slow, halting, reversible, and sometimes incomplete—carried at least as many costs as benefits. Thus while the planting of crops has seemed, in the standard narrative, a crucial step toward a utopian present, it cannot have looked that way to those who first experienced it: a fact some scholars see reflected in the biblical story of Adam and Eve’s expulsion from the Garden of Eden.

From Against the Grain by James C. Scott, published by Yale University Press in 2018. Reproduced with permission.

James C. Scott is Sterling Professor of Political Science and codirector of the Agrarian Studies Program at Yale University. 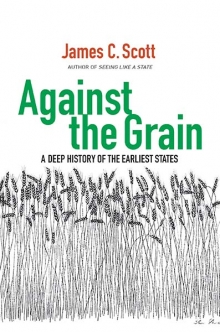