The fact that William the Conqueror’s parents, Robert, duke of Normandy from 1027 to 1035, and Herleva, were not married according to the rules of the Christian Church has over the years massively influenced interpretations of his life, his prospects, and his personality. It has been transmitted across the centuries into modern parlance with the nicknames ‘William the Bastard’ and ‘Guillaume le Bâtard’. Yet, with a host of recent publications having shown that Robert and Herleva’s relationship was of a type that was common and, for many, socially acceptable at the time of his birth, the whole subject is wide open for reconsideration. Young male members of the aristocracy often had a long- term partner with whom they did not go through a marriage ceremony, and whose status is for convenience frequently described as that of a concubine in the modern literature. Such a partner might in due course become a wife, be supplanted by a wife, or might form a ménage à trois with one. Many breaches of the Church’s expectation that heirs would be produced within a marriage sanctified by an ecclesiastical ceremony had occurred for centuries before William’s birth. They continued to occur up until the middle of the twelfth century.

That William’s beginnings mattered to him and to his contemporaries is shown by there being no mention of Herleva by name as William’s mother before Orderic Vitalis in his early twelfth- century interpolations into the Gesta Normannorum Ducum, initially composed by William of Jumièges in the 1050s and 1060s, and subsequently continued by Orderic and Robert of Torigni. The absence of any direct reference to William’s mother in the two principal eleventh- century Norman histories of his life, Jumièges’ Gesta Normannorum Ducum and William of Poitiers’s Gesta Guillelmi, the latter written in the 1070s to justify William’s actions and the conquest of England, is certainly an indicator of sensitivities. Furthermore, the numerous contemporary and near- contemporary references to William as a bastard (nothus or bastardus) indicate that his birth remained a subject of comment across much of western Europe throughout his life, and for decades afterwards. However, only one historian made William’s birth into a significant political factor and converted it into a source of weakness, namely Orderic Vitalis, writing in Normandy in the first decades of the twelfth century. Although he mostly used the word nothus as a simple nickname or descriptor, Orderic was so keen to give it prominence that he included it in the rubric at the head of what was for him the sixth book of the Gesta Normannorum Ducum. He also on several occasions made William’s birth a justification for rebellion.

It is manifestly wrong to give authoritative status to a single author writing almost a century after William’s birth, especially when, as we shall see, others saw the situation very differently. The starting point for any discussion of how Robert and Herleva’s contemporaries might have viewed William’s birth and prospects is the eulogy of Christian marriage in Dudo of Saint- Quentin’s Historia Normannorum, written in the late tenth and early eleventh centuries, and the earliest of the histories on which this book relies so much. Although her name was only included in later manuscripts, the eulogy was directed to Gunnor, the concubine who famously became the wife of William’s great- grandfather Count/Duke Richard I (942–96), thereby exemplifying the Norman rulers’ determination to portray themselves as models of Christian legitimacy. Its very existence is to an extent indicative of how far Norman society had adjusted to the cultural norms of the medieval West since the time of the Viking settlements in the first half of the tenth century that had formed the foundations of the duchy of Normandy; concubinage remains present, but it is marriage that is idealized. The same motivation, this time directly expressed by the rulers themselves, lies behind the survival of the texts of the dowries given to their wives by Dukes Richard II (996–1026) and Richard III (1026–7).

Presentation is, however, often far from reality.

From William the Conqueror by David Bates. Published by Yale University Press in 2018. Reproduced with permission.

David Bates is professorial fellow, University of East Anglia. His books include Normandy Before 1066 and The Normans and Empire. 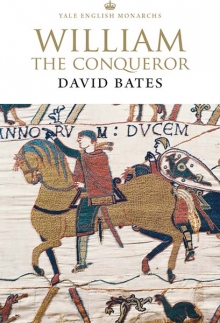