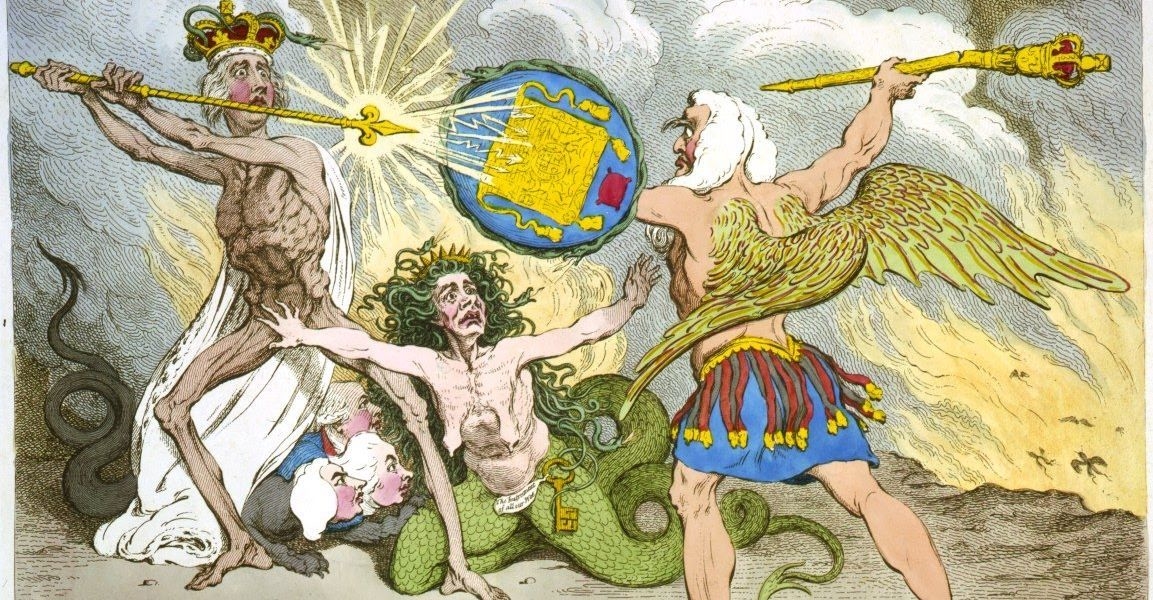 In 2004 Morten Morland published a cartoon in the Times that took aim at Anglo-American attempts to broker peace between Israel and Palestine. He did so by adapting a much older image: James Gillray’s “Sin, Death, and the Devil” of 1792.

Gillray’s caricature responded to the sacking of then-Lord Chancellor Edward Thurlow by means of an elaborate parody of Milton’s Paradise Lost. In the scene in question, Satan, who’s attempting to get out of Hell, encounters Sin (his daughter) and Death (born of his incestuous union with Sin). Gillray reworks one of the most awkward family reunions in literary history – Death wants to kill his father– by casting Thurlow as Satan, prime minister William Pitt as Death, and Queen Charlotte as Sin.

Two centuries on, Morland imagined Israeli prime minister Ariel Sharon as Satan and Palestinian president Mahmoud Abbas as Death, but as in Gillray’s image his satire once more pivoted around the central, interposing figure of Sin– a role now assumed by British prime minister Tony Blair. Like Gillray’s Queen Charlotte, Morland’s Blair is in a (sexually) compromising position. These would-be mediators aren’t to be trusted.

Morland’s cartoon reminds us how often today’s political cartoonists look back to their eighteenth-century counterparts for inspiration. In doing so, of course, they consciously situate themselves within a long tradition of visual satire. But their recycling of the satirical past also raises questions about how they wish their work to be read and engaged with by the public.

As you’ll no doubt have noted, Morland’s cartoon requires a great deal of explaining. It offers a parody of an eighteenth-century parody of Milton’s seventeenth-century poem. We often think of images as things we can take in at a glance, things that ask only for a moment’s attention. Political cartoons don’t tend to work this way.

We might well ask how necessary it is to know one’s Gillray and Milton in order to get the joke here. But surely some expertise is being called for. Political cartoons appeal to affluent and highly educated readerships— a kind likely to know something both of literature and of political cartoons past. And they gratify those readers who can register such allusions by reaffirming their cherished sense of cultural capital.

As these last statements suggest, I’m uncomfortable with lazy assumptions that the political cartoon–now or then–is a necessarily radically inclusive or democratic form. How many Guardian readers, for instance, can have identified Gillray’s “Temperance Enjoying a Frugal Meal” (1792), a merciless satire of King George III, behind Martin Rowson’s “Ye Constitution” of 2014, which lambasts Prince Charles for lobbying the government to expand the British grammar school system? These cartoons invite us to linger, to grapple with intricacy and arcane detail. Their appeal lies precisely in their difficulty.

But if this sounds a rather negative note, then it should also be said that the digital age has brought with it new–or rather, old–ways of negotiating this difficulty. In the eighteenth century, what we now call cartoons were sold as single-sheet etchings that could be purchased from specialist print shops. These prints were designed to be seen and enjoyed by groups, not individuals. Shops posted them in their windows. Hosts used albums of them to entertain guests. People pasted them onto furniture or even, as at Calke Abbey, Derbyshire, onto the walls of their homes. The political cartoon was fundamentally a social form.

These practices of communal reading and consumption were arguably lost once the cartoon migrated into the periodical in the mid nineteenth century and then into the newspaper by the early twentieth century. But now that the political cartoon has shifted its principal medium once again, becoming first and foremost a digital form, such practices of shared interpretation have made a return.

More people than ever before are looking at political cartoons, and the vast majority are doing so on their computers, tablets, or smartphones. In the age of Facebook, Twitter, and Instagram, the way we consume these images is very much social. Cartoons are continually shared, retweeted, and commented upon.

Nowhere is this social orientation of the digital political cartoon more powerfully seen than in the comment threads of newspaper websites such as the Guardian. Take, for instance, a cartoon of Martin Rowson’s from January 2016, which ironically contrasts Labour leader Jeremy Corbyn’s support for British nuclear disarmament with Iran’s committal to abandon its own weapons-building program. In the comments, one reader asks: “Why is Corbyn clutching a shuttlecock?” Three other readers then respond: “It is a safe game, when no one gets hurt”, “But it also involves a good deal of back-and-forth”, and “Of which in a political context is diplomacy”. This communal teasing out of meaning can be seen again and again.

I don’t mean to suggest that political cartoons are circulating within some ideal digital public sphere. Far from it. Many political cartoonists are openly ambivalent about the implications of the digital revolution on their form. Comments are often alarming in their vitriol, paranoia, and prejudice, and I’ve heard one cartoonist speak of the problem of “digital lynching”. Most especially, the Charlie Hebdo killings of 2015 offer a stark reminder that in the digital age, the cartoon traverses national and cultural borders in highly problematic ways.

Digital platforms encourage satirists to work allusively because different aspects of visual culture (including the visual culture of the past) are now so readily accessible. They are there to be played with. And these platforms also provide the means to create and sustain new relationships between visual satire and its public. But if the political cartoon is once more to become a truly social form, then we need to tackle difficult questions about how and to whom cartoons speak. Put simply, we’re at a fascinating and fragile moment in the political cartoon’s history.

David Francis Taylor is associate professor of eighteenth-century literature at the University of Warwick, and the award-winning author of Theatres of Opposition: Empire, Revolution, and Richard Brinsley Sheridan. 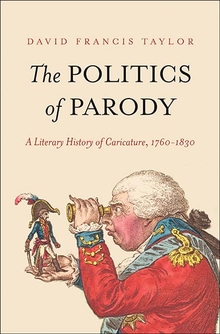