In July 2012, the electric grid in India failed, causing the largest blackout in history. It affected more than 620 million people, nine percent of the world’s population. Although there were many reasons for the power outage, it was a lack of water that triggered the Indian collapse. A major drought in India that summer increased the demand for electricity at the same time that it reduced electricity production. Because of the drought, farmers increased their irrigation of crops using electric pumps. Those pumps, working furiously under the hot sun, increased the demand for power, straining the grid. At the same time, low water levels meant that power generation at hydroelectric dams was lower than normal, making it doubly hard for the power sector to meet summer demand. Even worse, floods earlier in the year had caused dams to silt up with runoff from farms, reducing their available capacity even before the low water levels made things worse. A double water whammy of flood then drought hobbled the hydroelectric dams. The result? A population larger than all of Europe and twice as large as the United States was plunged into darkness, with railways and other critical services brought to a sudden halt.

Energy and water are the world’s two most critical resources, but what many don’t understand is even more significant: the two are intricately interconnected. They are like a hall of mirrors going on endlessly: energy needs water which needs energy which needs water . . . And strains in one can be crippling for the other with catastrophic consequences. In many ways, strains in the nexus of energy and water are our generation’s Cold War—a global crisis spanning decades that we need to solve or the future of humanity will look very different.

Virtually everywhere we look, signs of the extent of this crisis abound. The same summer of the blackout in India, a massive heat wave and record-setting drought swept across most of the United States, putting power plants in peril because cooling water was scarce or too hot to be effective. A few years earlier, the state of Florida made an unusual announcement: it would sue the U.S. Army Corps of Engineers over the Corps’ plan to reduce water flow from reservoirs in Georgia into the Apalachicola River, which runs through Florida from the Georgia-Alabama border. Environmentalists were concerned that the restricted flow would threaten certain endangered species. Regulators in Alabama also objected, worried about another species: nuclear power plants, which use enormous quantities of water, usually drawn from rivers and lakes, for cooling. The reduced flow raised the specter that the Farley Nuclear Plant near Dothan, Alabama, would need to shut down.

In California, two of its fabled nuclear reactors are sited on the coast between Los Angeles and San Diego. As one drives along I-5 between the cities, these nuclear reactors look surprisingly like two gigantic concrete breasts rising above the coast, just beside the highway and silhouetted by the ocean. Despite their evocative shape and their appealing, innocent-sounding name—SONGS, which stands for San Onofre Nuclear Generating Station—SoCal Edison announced that these plants would be shut down, partly because of water. Ongoing concerns that the nuclear power plants put ocean life at risk from entrainment of cooling water and the potential for radiation leaks that could contaminate the water along with other technical challenges became too burdensome to manage. It was easier to shut down the plant than to solve the radiation leaks and water problems to the satisfaction of the public.

Outside Las Vegas, Lake Mead, fed by the Colorado River, is now routinely one hundred feet lower than historic levels. As it stands, Las Vegas draws its drinking water from two straws that tap into Lake Mead. If the lake drops another fifty feet, the city’s water supply will be threatened and the huge hydroelectric turbines inside Hoover Dam on the lake would provide little or no power, potentially putting the booming desert metropolis in the dark while leaving its occupants thirsty. Las Vegas’ solution is to spend nearly $1 billion on a third straw that goes deeper, coming from underneath and up into the lake from the bottom. But even that drastic solution might not work. Scientists at the Scripps Institution of Oceanography in La Jolla, California, have declared that Lake Mead could become dry by 2021 if the climate changes as expected and water users who depend on the Colorado River do not curtail their withdrawals. We can argue about whether the glass if half-full or half-empty, but an engineer will point out that the length of your straw does not matter if the glass is dry.

From Thirst for Power by Michael E. Webber. Published by Yale University Press in 2018. Reproduced with permission.

Michael E. Webber is deputy director of the Energy Institute, codirector of the Clean Energy Incubator, and Josey Centennial Professor in Energy Resources in the department of mechanical engineering at the University of Texas at Austin. 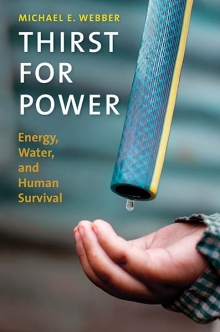