What happened to enlightened ideas after the long eighteenth century? As more scholars are placing ideals of enlightenment in their global contexts, we are learning that the conventional understandings of the fate of enlightenment no longer hold. Enlightenment did not end with the movement called Romanticism, its ideals of reason and cosmopolitanism wilting before the onslaught of lush emotionalism, evangelical Protestantism, and rising nationalism. In the United States by the 1830s, the term enlightened had expanded so much that it had lost much of its novelty and critical edge, becoming essentially synonymous with progress, improvement, and reform rather than the specific goals of emancipation from superstition, revealed religion, and traditional political authority. Increasingly detached from the specific critical conversations with which it had first been associated, the ideal of enlightenment now spread broadly in American culture. Americans no longer wondered whether they were the most enlightened nation in the world, as they had in 1796. They now assumed that they were, and set about holding up the torch of enlightened American “progress” for a variety of goals. By the middle and later nineteenth century, this new semantic looseness had made enlightenment coterminous with the broad objectives of American civilization and Manifest Destiny, losing not only the critical edge of the first inventors of the term but also the sense of ambivalence and doubt that had characterized the age. By the late nineteenth century, the way was paved for the invention of “The Enlightenment” as a concrete era in the eighteenth century. From an eighteenth-century question emerged a twentieth-century declaration, and from an eighteenth-century process emerged by the mid-twentieth century an era: the American Enlightenment.

Today, from every part of the political spectrum, in newspapers and magazines, in speeches and blogs, Americans express their hope that they are enlightened on a huge variety of topics: human rights, animal rights, economic austerity, capital punishment, recycling, gay rights, the pope, racism, evangelical Christianity, sodium intake, genital mutilation, universal health care, Marxism, environmentalism, the state of Israel, affluence, pornography, fathers doing housework and childcare, secularism, the Constitution, administrative techniques, democracy, human trafficking, and the purpose of universities, among other topics. The twentieth-century vogue for Eastern mysticism has also introduced the notion of personal enlightenment as an emancipation from materialism and worldly concerns, but this too has meshed with the general idea of a constant search for betterment in the present world.

Americans today also routinely invoke the American Enlightenment as a glorious moment in the national past that prioritized reason, empiricism, the separation of church and state, the dignity of the individual, the defense of human rights, progress, a faith in science, and representative government. The highly nationalistic, hyperreal American Enlightenment remains foundational to modern American identity. When he was president, Barack Obama was a constant exponent of a distinct historical epoch called the Enlightenment in the United States. Hewing to a diffusionary vision of enlightenment, Obama publicly invoked the European (and especially French) roots of ideas modern Americans value, such as freedom of conscience, representative government, and the rule of law.

Our modern views of the idea of enlightenment are not wrong. But they are not precisely what eighteenth-century thinkers meant by enlightenment. Tracing the views of enlightenment as they were expressed in the eighteenth century reminds us that those thinkers would probably have been surprised at our confident assessments of their legacies; they were never sure whether the tusks of the mastodon faced up or down. Enlightenment, as people in the eighteenth century recognized, was not a single event or achievement but an ongoing process fueled by a disposition of mind to believe that reason and empirical evidence might make the world a better place. But never did anyone agree on a single path to enlightenment, nor did enlightened thinkers ever agree that enlightenment had been achieved. Enlightenment was a journey that involved more questioning than answering. Doubt and wonder rather than confi dence characterized the bewildering number of efforts at enlightenment.

Assessing the achievements of his era in the year of his death, Thomas Jefferson encapsulated the simultaneous hope and anxiety that dogged those who strove for enlightenment. “All eyes are opened, or opening, to the rights of man,” he wrote in 1826. “The general spread of the light of science has already laid open to every view the palpable truth, that the mass of mankind has not been born with saddles on their backs, nor a favored few booted and spurred, ready to ride them legitimately, by the grace of God. These are grounds of hope for others.” Jefferson recognized that there were grounds for hope. But eyes were still opening; enlightenment had not yet been achieved.

As we unearth the bones of the past, we too debate how best to reassemble them. We are driven to connect the first people who called themselves enlightened to our aspirations for enlightenment today. This is an understandable goal; at times it is also an admirable one. But we should never forget that like the extinct mastodons, the people of the eighteenth century who called themselves enlightened walked a different earth from ours. We can try to recreate their world by listening to their words and scrutinizing their hearts and their minds. But in the end we are always visitors to their era. Our best hope for enlightenment today is to listen carefully to our eighteenth-century predecessors and then chart our own path, trusting that future generations will understand that we too pursued happiness for ourselves and others, hoping to realize our own particular species of enlightenment.

From American Enlightenments by Caroline Winterer. Published by Yale University Press in 2018. Reproduced with permission.

Caroline Winterer is Anthony P. Meier Family Professor in the Humanities at Stanford University and director of the Stanford Humanities Center. The author of three previous books, she received an American Ingenuity Award from the Smithsonian Institution. 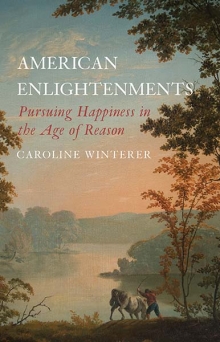