With the moving of the American embassy to the Jerusalem last month, the American-Israeli alliance has never looked stronger. However, even close allies can experience crises. Such was the case when Israel’s naval and air forces bombed and torpedoed the USS Liberty on 8 June 1967, killing thirty-four American sailors and wounding many others. The incident occurred during the Six-Day War between Israel and its Arab neighbors. Although in international waters, the ship was attacked in three successive waves. The Israeli government apologized for the incident, explained it was an honest mistake, and paid compensation to the victims’ families. However, in the US nerves are still raw. Many Americans, including the Liberty’s surviving crew, cannot understand how one of the best armies in the world mistook the Liberty for an Egyptian ship (at the time in which it was hit, the Liberty was thirty miles to the north of the Egyptian coast). Many theories abound; all of them attach sinister motives to the Israeli decision to attack the ship.

Whatever the reason, the whole incident was avoidable. Israeli Prime-Minister Levi Eshkol did everything he could in the days leading up to the war to convince the White House to create a direct line of communication between the Sixth Fleet—the American naval force in the Mediterranean—and the Israeli Defense Forces. Had some kind of a red line connected Sixth Fleet headquarters to the Israeli war room, the Americans could have immediately contacted Tel Aviv on June eight. They could have then alerted the Israelis to the fact that they were shooting an American vessel. However, the significance of this now-forgotten detail is even bigger than that.

In 1962, American officials, including President Kennedy, promised the Israelis that were Israel to be attacked, the US would come to its aid. In November 1964, the Israeli Chief of Staff, Yitzchak Rabin, even paid a visit to one of the Sixth Fleet’s aircraft carriers. Rabin was certainly impressed, but Washington refused to allow joint maneuvers or institute any mechanism that would enable Israeli and American troops to speak directly. Israel, it seems, was not yet regarded as a trusted ally.

In the days leading to the war, Eshkol was under immense pressure. His generals wanted to attack and claimed that war was inevitable. Eshkol believed that securing military liaisons with the Sixth fleet would be akin to an American commitment to Israel’s security. Eshkol could have used that commitment to convince his generals not to launch a war because an American guarantee was the best deterrent against Israel’s enemies.

Eshkol made every effort to make President Lyndon Johnson aware of his request. Ephrain “Eppy” Evron, a low level diplomat in the Israeli embassy in Washington, whom Johnson, for some mysterious reason, really liked, was sent to talk with Walt Rostow, the national security advisor, to make clear that Eshkol was disappointed that his proposal for “joint contingency planning” had been ignored by Johnson. Rostow’s response was evasive. And so Eshkol, after losing hope that Washington would respond to his appeal, had to finally submit to will of his generals and give a go-ahead. Thus started the war in which the Liberty was hit.

Why did Lyndon Johnson ignore Eshkol protestations? Had he assented, it wasn’t just the Liberty that would have been saved; the June 1967 war might have been avoided altogether. The short answer is that the Pentagon, already mired in the Vietnam War, abhorred the idea of adding another commitment to its list of tasks. Besides, Johnson despised Gamal Abd al-Nasser, the Egyptian President, and it was his understanding that the impending war might bring about Nasser’s downfall. As a result, he had no real interest in preventing the war. Finally, there was the question of America’s relations with the Arab world. Washington did not want to be seen in any way as complicit in Israel’s impending attack on Arab countries. This could have greatly complicated the operations of American oil corporations in the Middle East.

During the Six-Day War, Eastern Jerusalem was conquered and the Israeli government unitarily annexed it. The world never accepted this step, the US included. That’s why the American embassy had been, until a month ago, based in Tel-Aviv. President Trump’s decision to acknowledge Jerusalem as the capital of Israel shows the remarkable shift that occurred in Israel’s status as a US ally. In 1967, the Johnson administration was worried that a too close association with Israel would affect America’s relations with Arab countries. In 2018, Trump decided to ignore Arab rage and emphasize America’s strong bond with Israel.

Guy Laron is senior lecturer in international relations, Hebrew University of Jerusalem, and has been a visiting scholar at the University of Maryland, Northwestern University, and Oxford. He is the author of Origins of the Suez Crisis. 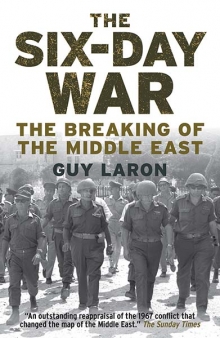