A traveler walking along the road from Jerusalem to Bethlehem could be forgiven for missing the ruins of the Kathisma Church. The ruins, found just past a gas station and just before the Greek Orthodox monastery of Mar Elias, are overgrown with weeds and strewn with rubble, unprotected by any barrier or fence, and barely noticeable from the road. For centuries, however, the Kathisma (or “Seat of Mary”) Church was an important stop for pilgrims on the road the Bethlehem. A rock in the center of the Church celebrated the spot where Mary rested on that road. Today the attentive visitor can still recognize the octagonal structure of the Church, and the nave where divine liturgy would have been celebrated. A curved indentation can still be seen on the southern wall. This indentation, or niche (known in Islamic tradition as a mihrab), dates from the early Islamic centuries when the Kathisma was turned into a mosque. It is meant to indicate the direction of Mecca and thereby to orient Muslims in their prayers (although the mihrab at the Kathisma Church actually faces a bit too far to the South).

The Kathisma Church—the ruins of which were only discovered in 1992 during work on the road to Bethlehem—is interesting in its own right, but it is even more intriguing for its relationship to a building several miles to the north, on the eastern side of the old city of Jerusalem: the Dome of the Rock. Like the Kathisma Church, the Dome of the Rock is an octagonal structure built around a rock (albeit a much larger rock). Muslims around the world today know this rock to be the spot from which Muhammad ascended into heaven (where he received the command from God that his followers pray five times a day). He arrived in Jerusalem after a miraculous journey at night from his native city of Mecca, travelling on a flying steed known as al-Buraq (a tour guide today will show you the spot where Muhammad tied up al-Buraq upon his arrival). Traditions relate that when Muhammad ascended to heaven, the rock rose up to follow him, which is why it appears to be partially raised today. In fact, stairs lead down to a chamber beneath the rock known as the “Well of Souls.” One legend recounts that Muhammad steadied the rock with his hand, leaving an imprint which is still visible today.

The origins of the Dome of the Rock remain mysterious. The earliest written accounts linking the shrine to the ascension of the Prophet date from the later middle ages. Among the first is that of the Persian pilgrim named Nasir-i Khusraw who visited Jerusalem in 1047. Nasir tells us that the rock in the middle of the Dome was the initial point (in Arabic, qibla) towards which Muslims prayed before God changed the direction of prayer to the Ka‘ba in Mecca. He also relates that Abraham and Isaac once walked on the rock, and that their footprints can still be seen. He does not mention that Muhammad ascended to heaven from the rock itself, but he does speak of the Prophet’s ascension from the area of the Dome, and he includes the detail of the rock rising up to follow him.

Earlier Islamic sources connect the rock to the scenario that will unfold on the Day of Judgment. An angel named Israfil will stand on the rock and sound a trumpet that will usher in the end times. The dead will be raised and gather on the Mount of Olives. A thin bridge will appear over the Valley of Kidron leading to the area around the rock (known to Muslims as al-Haram al-Sharif). The faithful will make their way across the bridge and from there into paradise itself. The faithless and grave sinners will plummet into hellfire below.

Most scholars offer other explanations for the origins of the Dome of the Rock. The Qurʾanic inscriptions inside the dome in Kufic script—which date from the origins of the building during the time of the Umayyad caliph ‘Abd al-Malik (r. 685-705)—including a preponderance of verses (or paraphrases of verses) which reprimand Christians for their doctrine. These inscriptions, and the location of the Dome on a spot above the Church of the Holy Sepulcher (which itself was built in part around the rock of Golgotha), suggests that it was meant to illustrate the superiority of Islam to Christianity.

Yet perhaps the more interesting point about the location of the Dome of the Rock—and the rock itself—is its association with the Temple of Solomon. The Bordeaux pilgrim of AD 333 reports that Jews would visit the rock (presumably on the ninth of the Jewish month of Ab) annually and anoint the rock, “lamenting and sobbing.” Other traditions associate the rock with the very spot on which Abraham was to sacrifice his son Isaac, that is, Mt. Moriah (which Chronicles 3:1 identifies as the location of Solomon’s Temple).

Biblical accounts of Solomon’s Temple (or the second Temple) do not involve a rock in its center. Yet it seems likely that by the time of Islam’s rise, the rocky outcrop which now sits at the center of the Dome of the Rock was identified with the Temple, and perhaps with the inner sanctuary, the Holy of Holies, itself. It is possible then, that the Dome of the Rock was constructed intentionally to transform the holiest spot of Judaism into an Islamic sanctuary. Thus the Dome of Rock stands not only as a shrine of immense importance to the living faith of Muslims, but also as a testament to the intimate relationship of Islam to Judaism and Christian from its very origins.

Gabriel Said Reynolds is professor of Islamic studies and theology at the University of Notre Dame. He is the author of The Qur’an and Its Biblical Subtext and The Emergence of Islam and the editor of The Qur’an in its Historical Context. He can be found on Twitter at @GabrielSaidR. 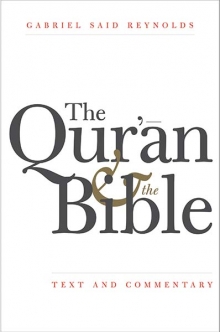