Fast-forward to 2050—almost thirty-five years from now. What will the world look like? How will technology have transformed our daily lives? Will it be a world of robots and artificial intelligence (AI)? Of graphene, fusion, and electric transport? Now rewind—back to 1980. This was still a world of typewriters and the fixed phone line. No Internet, no apps, no mobiles, no laptops; not even any word processors (as we know them) or fax machines.

These long time horizons matter in energy. The future world will certainly need a lot of energy. That we can be confident about. We can also reckon that many of the decisions made today about energy will shape this world. Many of the power stations on today’s energy networks were there in 1980, and many of those that were not were in the planning stages. The youngest coal power station in Britain started to come on-stream in 1974. The transport systems today look very similar, as do the nuclear power stations.

The bulk of our energy systems remain in place thirty-five years on: coal, gas, and nuclear power stations; the internal combustion engine; oil exploration and large oil and gas wells; OPEC (Organization of Petroleum Exporting Countries) and the dominance of the Middle East; and Russia’s vast reserves. There have been changes, the most important of which in terms of scale have been in the fossil fuels. The biggest has been the coming of gas: it was illegal in the US and Europe to burn it in a power station until 1990. Now gas-fired power stations compete directly with coal for market share. Then there is shale gas and oil, and the great advances in extracting fossil fuels. Wind farms and solar panels, biocrops to produce ethanol, and biomass are all ‘new’, but none has yet made much impact. For all these developments, overall the world depends on coal even more now than it did in 1980, and oil has not been toppled from its dominance of transport.

The world is still divided up into its main fossil fuel suppliers: the US, Saudi Arabia and Russia (all producing over 10 million barrels of oil per day, mbd), plus the rest of OPEC—and its main customers: China, Europe, Japan and the US again—and the long tail of the rest. With the exception of the US, the producers are overwhelmingly authoritarian, and are assumed to become more powerful (and richer) as the supplies peak, with consumers having to continue to beg, condone and even invade as their economies are increasingly undermined by their rising energy costs. It is remarkable just how little has changed on the energy front in the last thirty-five years. Indeed, many of today’s energy fault lines go back at least to the beginning of the twentieth century and the origins of the oil industries in Russia and the US.

The companies have reflected this stability. The gradual erosion of the market shares of the big private oil companies (international oil companies, IOCs) in favour of the growing band of ever more powerful state-owned rivals (national oil companies, NOCs) had begun in the 1970s and gradually played out in the 1980s. The oil industry is now largely in the hands of companies like Saudi Aramco, the National Iranian Oil Company, Kuwait Petroleum Corporation, Pemex, and Rosneft, as well as Chinese companies such as PetroChina. Even in the democracies, companies like Statoil are largely state-owned. Over 90% of global reserves are in state hands, with the likes of Exxon, Chevron, Shell, and BP forced to the periphery.

When looking backwards yields a picture of such continuity, it is not surprising that the future is seen as an extension of this fossil fuel past: oil for transport and petrochemicals, and coal for electricity and industry. Energy is what facilitated the great transformation of industry, and led to a world capable of supporting 7 billion people, compared with fewer than 2 billion in 1900. Fossil fuels have facilitated almost all the economic activity that has taken place in human history, freeing us of the constraints of very limited manual labour and horse power (literally) by opening up the huge capacity of the energy stored in the carbon-based fuels. The fossil fuels are what made the twentieth century possible.

The temptation to extrapolate this past into the future, and to see 2050 as a modified version of today, is almost overwhelming. Take the recent energy outlooks from the big companies. Despite lots of hype about the challenges ahead, and especially about decarbonization, Exxon, BP, Shell and Statoil all have oil, gas, and coal playing a big part in the energy mix for the next half-century at least. The International Energy Agency (IEA) takes a similar view. Projections of coal-burn in power stations suggest that, whilst its recent climb from 25% to 29% of world primary energy demand between 1990 and 2013 might come under a bit of scrutiny, it will remain the dominant fuel for electricity for the next half-c entury. Oil is predicted to remain key to transport, with gas taking up some of the petrochemical demand and accounting for a good proportion of heating.

These projections flatly contradict the sorts of scenarios which would be required if significant climate change is to be averted and the 2015 Paris Agreement’s ambition of limiting the temperature increase to just 1.5°C is to be achieved. Indeed, recent studies have shown that the global electricity generation capital stock has already built in a 2°C increase. No more carbon-based investment can be made if the target is to be met. Thus there is a basic and fundamental disconnect between the assumptions of business-roughly-as-usual and the fate of the planet. The stakes could not be much higher.

From Burn Out by Dieter Helm. Published by Yale University Press in 2017. Reproduced with permission.

Dieter Helm is fellow in economics, New College, and professor of economic policy, University of Oxford. In 2017 he carried out the Cost of Energy Review for the UK government. 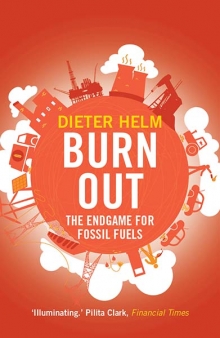