Our ideas and institutions shift with alarming regularity. Spanish conquistadors of the early sixteenth century—bounty-hunters hell bent on extracting silver from the New World, regardless of the human cost—would have been surprised to discover that Spain, at one point Europe’s superpower, is now one of the poorer Western European nations. The Ottomans of the sixteenth and seventeenth centuries—who had threatened to conquer Vienna and, by implication, much of the rest of Europe—would have been amazed to see how their empire, which had stretched from the Balkans into the Middle East and North Africa, completely imploded after the First World War (even if the seeds of its downfall were sown many years before). Victorians would be shocked to find that their beloved British Empire—which provided the essential foundations for nineteenth-century globalization—had more or less disappeared by the late 1940s, by which time the UK itself was on the brink of bankruptcy. Those many fans of the Soviet economic system during the 1930s Depression years would doubtless be astonished to discover that the entire edifice began to crumble following the fall of the Berlin Wall in 1989.

Even when patterns of globalization endure for many centuries, they can break down remarkably quickly, leading to dramatic changes in fortune. Consider, for example, the history of Andalucía in southern Spain, a story that veered from one seemingly permanent political structure (Islam) to another (Christianity) within just a handful of years.

In AD 711, a Muslim Berber force travelled from North Africa across the Mediterranean to reach southern Spain. Six years later, and thanks to the Berbers’ defeat of the hitherto-ruling Christian Visigoths, Córdoba had become the capital of what was known as al-Andalus. The conquering Moors then set about building their symbols of power. In 784, construction began on the Grand Mosque of Córdoba. By 987—and following three further development stages—the mosque was complete. A truly remarkable building, it was designed above all to be a symbol of lasting Islamic dominance. Yet, following the defeat of the Almoravids by the Almohads, the center of Islamic power later transferred from Córdoba to Seville, just under a hundred miles away. Inevitably, a new mosque was required and, in 1171, it was provided: topped off by its minaret, known today as the Giralda, Seville’s Almohad Mosque was a marvel of the Moorish world.

For the citizens of southern Spain, it would have been easy to believe that medieval ‘globalization’ was ultimately dependent on the spread of Islam, a way of life which appeared to be intellectually, technologically and culturally much more advanced than anything Christian Europe had to offer. Yet within a handful of years, Islamic rule in the Iberian Peninsula had descended into chaos. In 1213, following the death of the ruling caliph, his 10-year-old son took over. This inevitably triggered infighting among the grown-ups, each of whom jockeyed for power. Worse, the young caliph died a decade or so later without leaving a single heir: at a stroke, the ruling conventions of Moorish Spain had been totally undermined. For the northern Christian kings, this was too good an opportunity to miss. By 1236, they had taken control of Córdoba. Twelve years later, they had their hands on Seville. Córdoba’s mosque was ‘converted’ into a cathedral, while Seville’s mosque was demolished (apart from the Giralda, which became a bell tower), to be replaced by what to this day remains the world’s largest cathedral.

The ultimate irony, perhaps, is that Seville Cathedral—or, to give it its full Spanish name, Catedral de Santa María de la Sede—houses the remains of Christopher Columbus. In 1492, the year in which Columbus discovered the New World, the Moors were finally expelled from the Iberian Peninsula, following the start of the Inquisition in 1478 (doubtless a surprise to the remaining Moors: after all, nobody expects the Spanish Inquisition…). By then, Islamic power was being consolidated farther east.

Yet while there were attempts to create lasting stability—ranging from the Peace of Westphalia in 1648 through to the Congress of Vienna in 1814–15–post-Columbus globalization was always vulnerable to imperial rivalries. For a while, the British Empire, in all its pomp, appeared to provide an answer: its enthusiasm for free trade—enforced by the long arm of the Royal Navy—opened up a remarkable web of commercial connections worldwide. Other nations, however, understandably wanted their share of the spoils, most obviously the Russians in the nineteenth century and the Germans in the first half of the twentieth. Eventually—and, in hindsight, inevitably—post-Columbus globalization collapsed, to be replaced by war, revolution and isolationism. Only after the Second World War was it able to re-emerge, albeit under the shadow of the Cold War. This time the US was, in effect, both globalization’s leading architect and its main sponsor, even if Washington now rejected the empire-building it had partly sponsored during the nineteenth century. The emergence of the US as the world’s dominant superpower was, in many ways, the apotheosis of post-Columbus globalization, signaling the triumph of Western liberal democratic values and free-market capitalism.

At the beginning of the twenty-first century, however, post-Columbus globalization is in serious trouble. Economic power is shifting eastwards and, as it does so, new alliances are being created, typically between countries that are not natural cheerleaders for Western political and economic values. There are signs that pre-Columbus versions of globalization—in which power was centered on Eurasia, not the West—are making a tentative reappearance. The US is no longer sure whether its priorities lie across the Atlantic, on the other side of the Pacific or, following the election of Donald Trump as president in 2016, at home rather than abroad. Indeed, President Trump confirmed as much in his January 2017 inauguration speech, stating that ‘From this day forward, it’s going to be only America first.’ Free markets have been found wanting, particularly following the global financial crisis. Support and respect for the international organizations that provided the foundations and set the ‘rules’ for post-war globalization—most obviously, the International Monetary Fund, the European Union and the United Nations Security Council (whose permanent members anachronistically include the UK and France, but not Germany, Japan, India or Indonesia)—are rapidly fading. Political narratives are becoming increasingly protectionist. It is easier, it seems, for politicians of both left and right to blame ‘the other’—the immigrant, the foreigner, the stranger in their midst—for a nation’s problems. Voters, meanwhile, no longer fit into neat political boxes. Neglected by the mainstream left and right, many have opted instead to vote for populist and nativist politicians typically opposed to globalization. Isolationism is, once again, becoming a credible political alternative. Without it, there would have been no Brexit and no Trump.

From Grave New World by Dieter Helm. Published by Yale University Press in 2017. Reproduced with permission.

Stephen D. King is Senior Economic Adviser at HSBC. He has also been a specialist adviser to the House of Commons Treasury Committee. 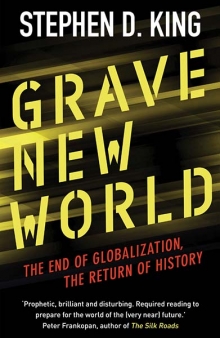