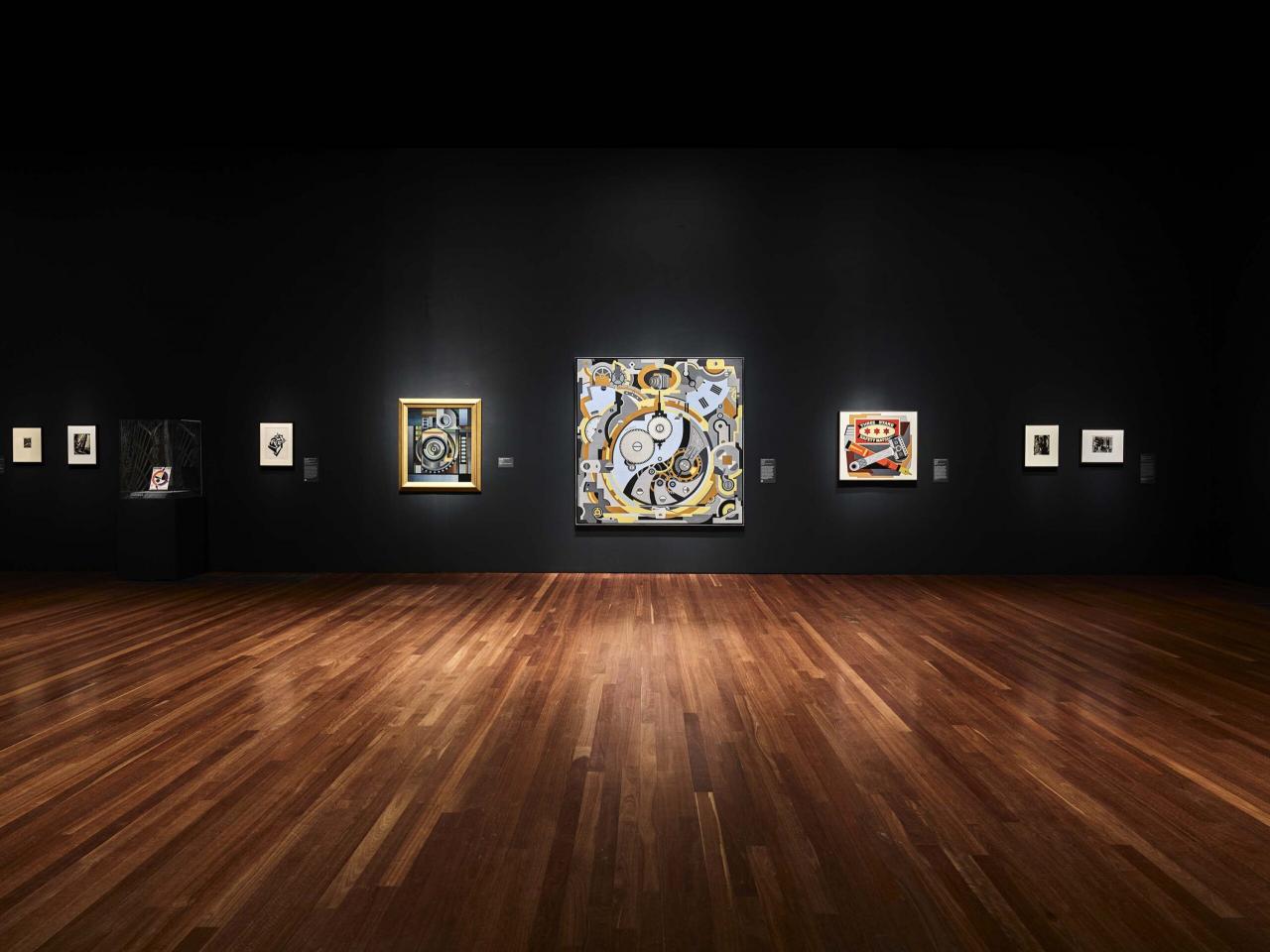 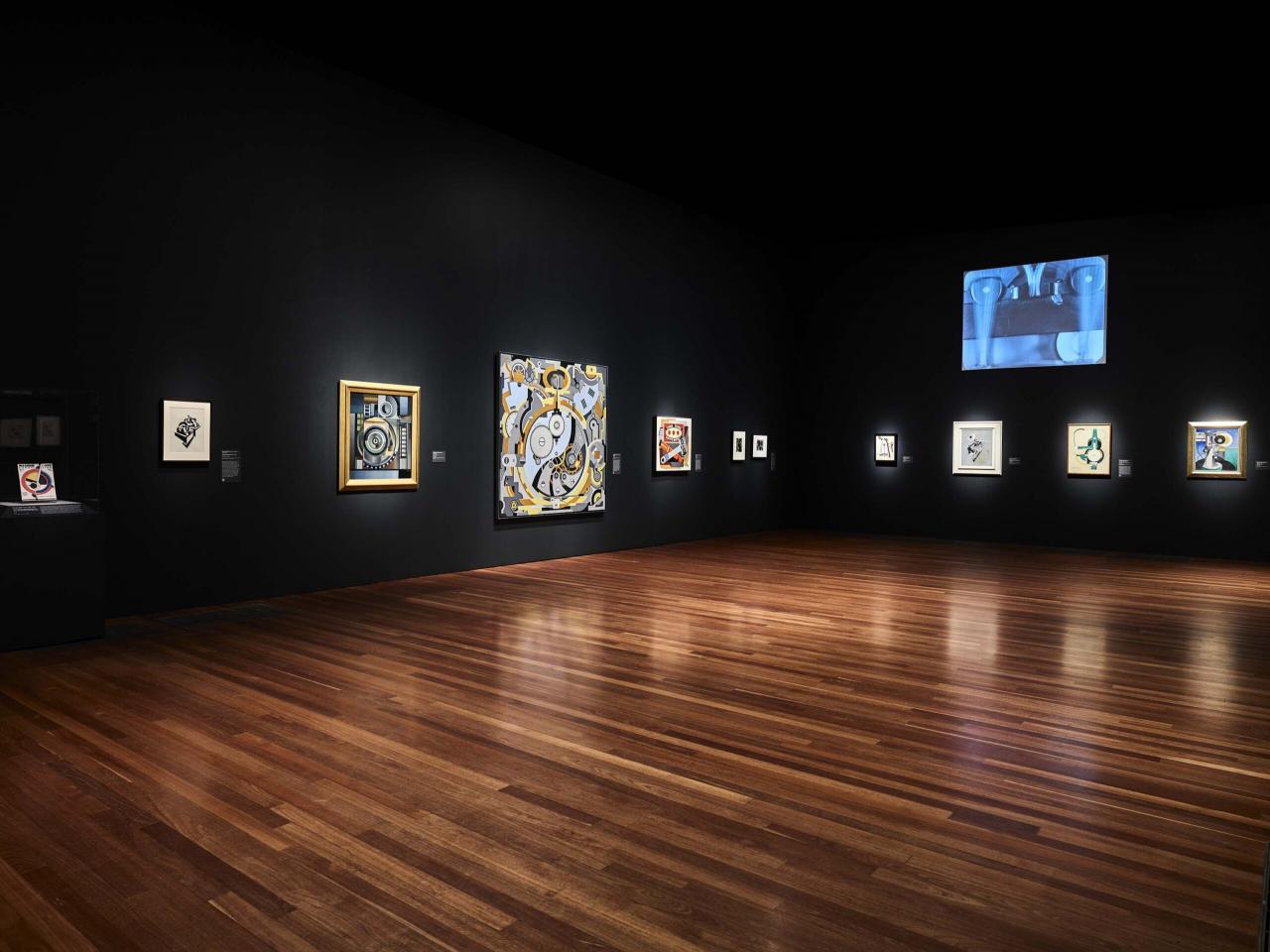 Despite its relatively small scale, Machine Ornament No. 2 has a commanding presence in the gallery. The bold, simplified forms of Lozowick’s composition thrust dramatically into the viewer’s space, conveying the forceful power of industry. The drawing belongs to a series of Machine Ornaments by the artist that were included in the landmark 1927 Machine-Age Exposition in New York. Mounted in a commercial space in Midtown Manhattan by the avant-garde literary publisher Jane Heap, the Machine-Age Exposition sought to unite the “Engineer… the architect and artist” by displaying fine art objects—including those by Lozowick and other Precisionists such as Charles Demuth—alongside actual machines and industrial parts, such as airplane engines, crankshafts, propellers, gears, and meat slicers. Many of these objects were reproduced in the catalogue for the Machine-Age Exposition—displayed in the exhibition Cult of the Machine next to Lozowick’s drawing—which features on its cover a dramatically abstracted rendering of a ball bearing by the French Purist artist Fernand Léger. Like Lozowick’s Machine Ornaments, the exposition reflected the widespread glorification of technology in 1920s America.

The works Lozowick exhibited at the Machine-Age Exposition reveal the influence of Russian Constructivism. He may have been inspired to develop his Machine Ornaments in part by the abstract Prouns (an acronym for “project for the affirmation of the new” in Russian) that the Russian artist El Lissitzky produced between 1919 and 1927, and viewed as metaphors for the classless and technology-driven society he hoped would result from the Russian Revolution. Like Lissitzky, Lozowick was invested early in his career in using abstract form to convey messages of social change. Yet he also recognized its potential to align with the forces of consumer capitalism, and in 1930 stated that “the great danger of extreme preoccupation with formalism is that it is likely to degenerate into decoration and ornamentation.”  By 1934, Lozowick had declared his support for the artistic doctrine of Socialist Realism embraced by the Communist movement.

Following the advent of the Great Depression, Lozowick increasingly incorporated figures of laborers into his compositions—focusing less on the utopic promise of the machine and more on its impact on and relationship to the worker. Two works featured in Cult of the Machine typify this stylistic shift. The lithographs Steel Valley (1936) and Through Brooklyn Bridge Cables (1938) are featured in a gallery dedicated to Social Realist perspectives, which includes paintings by John Langley Howard and Reginald Marsh, excerpts from Charlie Chaplin’s film Modern Times (1936), and a wall of newspaper headlines from the Machine Age and the present day that reveal the persistent resonance of terms such as “technological unemployment.” Pictured here are the aspects of American life that are left “out of the frame” of the typically de-populated, aesthetic views of industry characteristic of Precisionism—such as the plight of the country’s unemployed and working classes during the Great Depression, the labor strikes and protests that gripped the nation during this tumultuous time, and the mindless drudgery of work along assembly lines. In this context, Steel Valley and Through Brooklyn Bridge Cables—with their prominent inclusion of laborers within industrial landscapes—resonate with a Social
Realist focus on American working class lives.

While in Machine Ornament No. 2, Lozowick abstracted his industrial subject matter and conveyed its awesome power, in Steel Valley and Through Brooklyn Bridge Cables he widened his perspective to include a view of the human experience of technological innovation. In Through Brooklyn Bridge Cables, Lozowick included figures along a platform at the upper right, surrounded by a halo of light, who are attending to the cable structure of the featured bridge.  The cables frame a dramatic vista of the Manhattan skyline, underscoring the workers’ important roles in maintaining the infrastructure of modern urban life.

In Steel Valley, a landscape dominated by steel mills and railroad cars billowing plumes of smoke includes a view of two laborers atop a telephone pole, at a dizzyingly vertiginous height.  The figures contrast startlingly with the vast expanse and rigid geometries of their largely man-made environment—one in which nature is so clearly subordinate, dominated and occluded by the massive industrial structures that have sprung up to harness its resources. The presence of these laborers conveys a sense of the awesome but also terrifying power of industry and technology—an example of what David Nye has termed the “technological sublime”—and alludes to the safety risks posed by working at such a site. To contemporary viewers, the darkened, smoke-filled skies in the composition may also evoke the disturbing consequences of industrialization, such as environmental damage.

Visual reminders of the labor—and sacrifice—underlying industrial operations appear infrequently in Precisionist scenes.  Indeed, what may be more surprising than Lozowick’s stylistic turn is the fact that no such obvious changes are evident in works by many of his Precisionist contemporaries during the Depression years. One of the key practitioners of the style, Charles Sheeler, who once asserted that “sociology or propaganda of any sort are adulterants of the aesthetic content of a picture,” painted Classic Landscape (1931)—a streamlined, abstracted view of the Ford Motor Company’s River Rouge plant that is devoid of any sign of human toil—in the early stages of the Depression. That Edsel Ford, Henry Ford’s son, purchased the painting a year later, in 1932, points to the perceived alignment of the work with an idealized, sanitized view of industry. That same year, the infamous Ford Hunger March of March 7, 1932—one of the first and most violent in a series of labor protests across the nation that led to the unionization of the automobile industry—took place outside the River Rouge complex, pointing to the seeming disconnect between Precisionist views of industry such as Classic Landscape and the socio-political circumstances in which they were made.

The very different contexts in which Lozowick’s works appear in Cult of the Machine—first, in a gallery featuring objects that reflect the more celebratory responses to industry expressed by many Americans during the 1920s, and later, displayed alongside more sobering Social Realist compositions focused on the plight of the country’s unemployed and working classes during the Depression years—underscore the artist’s own evolution both stylistically and ideologically. They also point to some of the shifting political perspectives in America during this tumultuous interwar period, when the initial widespread embrace of the country’s new technologies and industries gave way—particularly as the Depression took root—to a growing awareness of the sometimes devastating social and economic effects of these advances.

Emma Acker is associate curator of American art at the Fine Arts Museums of San Francisco.