Rural Americans do, indeed, have more guns than their urban counterparts. According to the General Social Survey, the highest rates of gun ownership can be found in the most rural areas of the southeast United States. In those wide-open fields and forests, rural residents—black and white—are more likely to have a gun at home than not.

But why? There are a few surface-level explanations. Isolation is one of them. Law enforcement is not readily at hand to help when something goes wrong. Hunting may explain high rates of gun ownership too, although even in rural America, there are fewer hunters every year. Further, amidst the wilderness, there are more wild threats. Certainly, these are all important reasons why rural people have more guns. Yet there’s something deeper at work—something that rests at the core of the United States government.

I lived within the ten-mile evacuation zone around the Vogtle Nuclear Power Plant in the rural and mixed-race Burke County, Georgia. There, two nuclear reactors have been operating since the 1970s and an additional two are currently being built. This is the only new nuclear reactor construction underway in the United States. When I interviewed people there, Burke County was one of the most violent counties in the state, with high rates of aggravated assault and violent crime, according to FBI data. When I interviewed residents who lived around the plant, those I spoke to, even elderly women, kept rifles or guns at home, and sometimes in their vehicles.

All this fear is enabled by a constant, ebbing truth. There is no government ready at hand to defend the people of Burke County. In fact, the situation is largely the opposite. Residents identify that their government is closely allied with corporations in the pursuit of profit, regardless of the local costs. So in response, they take up arms to defend their own rights.

How, though, did this happen? Why is it that rights to ownership of property, human health, and safety, would be harder to come by for the people of Burke County? This underlying exploitation is enacted through what I call the “rule of numbers.” American democracy typically lets the “most” rule in all cases. Democracy can be about people’s rights and the spontaneous mass coming together to make brilliant decisions, but it also has become dominated by bureaucratic hierarchy that props up for-profit corporations. The government rules by a best-is-most mantra that leaves those with the least money, and the fewest in number, vulnerable.

For whoever is the minority, the rule of numbers is patently dangerous. And rural people are a perpetual minority, one that now constitutes only fifteen percent of the U.S. population. The rural poor are especially vulnerable, and the most vulnerable of all are those who are rural, poor, and black. Thus, the fears that drive a rush to the gun are not unfounded in rural Burke County or elsewhere in the rural United States. In fact, the people of Burke County are often on their own, and have been for some time. To fundamentally change the need for guns, the government too must fundamentally change. The government must serve the rights of all, not just the rights of those with the most power.

Loka Ashwood is assistant professor in the department of agricultural economics and rural sociology at Auburn University. She is a former award-winning journalist whose work has been published in books and sociological journals. 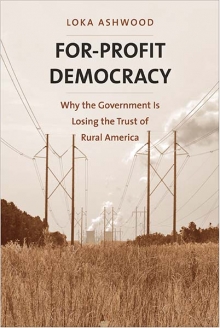