The oracle at Delphi advised, “Know Thyself,” and the rock band Rage Against the Machine screamed, “Know Your Enemy.” Which is more important for winning a war? Or rather, is it both? Military historians are keenly interested in the extent to which armies knew and understood the abilities and capacities of both themselves and their foes. The Siege of Acre, the opening contest of the Third Crusade (1189-1192), provides an instructive case study in this regard.

At Acre, we encounter adversaries who knew each other very well indeed. The Christian army was initially led by Guy of Lusignan, the titular king of Jerusalem who, just two years prior, had been soundly defeated at the Horns of Hattin by the same Muslim commander he now faced again: the Ayyubid sultan Saladin. The crusaders besieged the city and contended with the gritty defense by its garrison, while Saladin succored it by attacking the Christian camp around its perimeter. But after two years of earnest and expensive effort, Saladin’s rescue attempt ultimately failed, and he could only watch helplessly as Acre surrendered in July 1191.

Saladin knew—or thought he knew—his opponent well enough to win. In the brilliant victory at Hattin, he had surrounded Guy’s army on a waterless landscape, then tormented it with missile fire and campfire smoke until the Christians could bear no more. Attempting to break out, groups of knights erupted into cavalry charges that were quickly surrounded and destroyed. At Acre, the sultan replicated the strategy, surrounding the Christian camp and harassing it daily, hoping to lure its soldiers out into open ground. On several occasions, they happily obliged and were, accordingly, surrounded and destroyed. The biggest disaster was the St. James offensive on July 25, 1190, when thousands of foot soldiers advanced against Saladin’s ranks and were annihilated by his swift cavalry.

But leaders must condition tactics with situational awareness. Acre was not Hattin: throughout the year, western ships periodically arrived in Haifa Bay with supplies and reinforcements, which allowed the crusade leaders to replace their losses and, at length, return the army to its previous strength. More effective might have been a direct attack plunging into the heart of the crusader camp, a tactic designed to annihilate instead of attrit. This he never tried: adamant that constant pressure on the perimeter would eventually entice the Christians forward, Saladin’s familiarity with his foe wound up entrapping him in a drawn-out and unsuccessful fight.

In contrast, rather than take prior experience as gospel, Saladin’s opponents seem to have initially disregarded it entirely. First time shame on you, second time shame on me: on October 4, 1189, Guy once again advanced against Saladin’s army in open battle. He foolishly directed the crusading army towards Saladin’s camp, only to watch it be repelled and massacred. Only after this second lesson did a measure of sensibility kick in. First, he and the other crusade leaders actively worked to restrain their soldiers, who were instructed not to pursue Muslim skirmishers beyond certain ranges. Next, the siege camp was barricaded behind protective ditches and ramparts in a bid to gain some relative security. Finally, the army’s attention was redirected towards Acre’s walls, and siege operations began in earnest.

Restraining martial enthusiasm was difficult, but even partial success was enough to ensure defeats would not become decisive. On the feast of St. James, for example, the crusader cavalry avoided the disaster entirely because the elites refused to partake in the ill-advised infantry advance. The late-arriving Duke Frederick of Swabia, on the other hand, failed to get the memo. His performance was less pathetic than that of his father (Emperor Frederick Barbarossa, who had fallen off his horse and drowned in a river in Anatolia) but not by much. Disregarding warnings from his peers, the duke led his German cavalry on a failed charge into Saladin’s ranks on October 7, 1190, and he was lucky to escape with his life. In the main, however, the crusade leaders managed to resist their impulses and kept their eyes on the prize, Acre—which they eventually won.

Familiarity can breed contempt, but in war contempt can have lethal consequences. Contempt for his foe’s critical facilities led Saladin to apply the same tactics over and again, certain that the crusaders would again defeat themselves through impetuosity. The crusaders, on the other hand, eventually recognized their weakness and stopped playing along. In this instance, the side who knew both their enemies and themselves emerged victorious.

John D. Hosler is associate professor of military history at the Command and General Staff College at Fort Leavenworth, Kansas. His previous books include Henry II: A Medieval Soldier at War, 1147–1189. 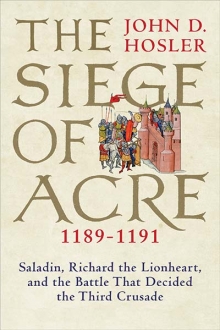