“The End of the Jewish People is Here.” This is not a headline from the 1940’s but from June 2018. It appeared as one of many articles reporting on a survey conducted by the American Jewish Committee, which polled American and Israeli Jews on a range of contemporary issues. The primary finding of this study displayed significant differences in popular opinion regarding the policies of Donald Trump. Asked if they approved of Trump’s handling of the United States-Israel relationship, 57 percent of American Jews disapproved while 34 percent approved. Among Israeli respondents, 77 percent of those surveyed approved while 10 percent disapproved. In light of this gap, according to some, the Jewish people (in the singular) are no longer.

There are many reasons to treat these survey results with caution, as they almost certainly exaggerate the discord between these two Jewish communities. For one, the AJC prepared this study in advance for a meeting with Prime Minister Benjamin Netanyahu, whose interests would be served by a statistical display of local support for his coordination with Donald Trump. (By contrast, another recent survey, conducted for Haaretz newspaper in July 2018, showed 49 percent of Israelis supporting Trump.)

Even if exaggerated, these recent findings likely evoked such prominent, emotionally-ridden reactions because their message struck a chord with an observation shared by many: a feeling—not based on statistics, but on conversations and first-person encounters—that there are meaningful distinctions between Israeli and American Jewish cultures. These distinctions, however, are not new and should be explored as something other than a cause for panic.

Comparing Holocaust memory, as a moral and historical reference point in many contemporary discussions, is a critical place to start. Beginning in the early postwar years, two different frameworks of memory began to develop in the two countries and their respective public languages: Hebrew and English.

Consider these examples: On December 27, 1948, LIFE Magazine featured a David Seymour photograph showing a young war refugee named Tereska, captioned, “Children’s wounds are not all outward. Those made in the mind by years of sorrow will take years to heal.” This image was perceived as an early example of what a concentration camp survivor looked like. Early postwar items like this taught the American public to approach Holocaust and war survivors through a psychotherapeutic lens, as tormented souls in need of healing. Meanwhile, the developing Israeli news media taught its public a different approach. There, activists and partisans like Tsivia Lubetkin modeled the first Holocaust testimonies in prominent public speeches. In a photograph of Lubetkin from Palestine 1946, Lubetkin stands erect as she speaks for seven hours straight about the armed resistance in the Warsaw ghetto. Here, memory and political self-assertion were inseparable.

In 1953, as another point of comparison, Israel passed the Yad Vashem Law, which established a permanent, governmental organization dedicated to documenting and commemorating the Jewish life eradicated during the war. That same year, a significant public act of Holocaust recognition also took place in the United States—on the popular TV show, “This Is Your Life.” The survivor Hanna Bloch Kohner was pulled out of the audience and invited to sit in the “chair of honor.” Kohner blushed as her personal story was reconstructed on screen. The Yad Vashem Law placed Holocaust memory on the level of governance and institution building. Its aim was to ensure the existence of a collective, sovereign space that would house that memory. The American TV show built a Holocaust archive out of individual, emotional memories, ones that were largely unburdened by Jewish culture and thus easily translatable to the broad non-Jewish public.

Since then, the differences between Israeli and American Holocaust memory have shifted, spiraled and expanded. Like an ecology in the natural world, these memory environments are not deterministic or precise. They are messy, malleable, but powerful webs of reference and practice. They provide people with differing resources for historical narration and self-understanding.

These ecologies of memory do not just shape public media or ceremonies, but first-person testimony as well. I came to this conclusion after spending years immersed in Holocaust video testimonies produced over the past four decades. Looking only at the testimonies of Lithuanian Jews, who all survived similar wartime events, I observed significant narrative distinctions in survivor testimony, depending on where the witnesses lived and in what language they testified. To be clear: These differences never call into question the fact that mass shootings, imprisonment, starvation, and deportation to concentration camps nearly decimated Lithuanian Jewry. Rather, they show how postwar and post-migration environments give people various ways of drawing meaning from these same violent events.

Consider, for example, the way that two survivors, one American and one Israeli, recall the same historical moment, September 1941, when they were each evicted from their homes in Vilna and sent to live in the Vilna ghetto. Jack Arnel (b. 1929) testified to the USC Shoah Foundation in English in New York in 1996. As he looks back at this moment, he foregrounds the emotional footprint that it has left on him ever since:

“There were Polish and Lithuanians who would jump on people and grab their bundles. Sickly people, the contents sprawled out. It is a scene that has made a very, very big impression on me. I just walked around with a big pain in my heart.”

The cause-and-effect process that interests Jack is about the impact of the event on his person. He does not catalog stolen goods but the images most critical for his self-development thereafter. Memory takes place in the psyche and its primary aim is self-excavation.

Sa’adyah Bahat (b. 1928) testified to the USC Shoah Foundation in Hebrew in Haifa in 1997. He looks back at this same event in Vilna from a different angle:

“The Lithuanians evicting us don’t know how to swallow it. The head of the household is decorated with Lithuanian medals. They let us walk first, which I guess is some kind of honor. But they evicted us nonetheless.”

Bahat explores this same experience of eviction at the level of legal, structural failure: It is not his emotional response, or even the prejudices of his evictors that interest him, but rather the very system that brought about this cruel absurdity. As he tells it, Lithuanian soldiers were forced to expel someone who, according to previous legal standards, should have been considered one of their own. Bahat’s memory gives rise to a discussion of modern nation states, and how they failed the Jews at this time. He responds to a memory of structural Jewish rejection with a similarly structural form of recovery—state building, rather than emotional exploration. Each of these paths towards memory can support different “lessons” from the Holocaust. Jack Arnel ends his testimony with a comparison between the Holocaust and violence in Yugoslavia and Africa. Sa’adyah Bahat concludes with no such comparisons, but rather with humor regarding the term “second generation Holocaust survivor.” Bahat’s children, as he sees it, grew up just fine.

Neither of these genres of memory is, a priori, more moral or truthful than the other. Each genre of memory could lead people to do good as well as harm. Each reveals its own ethical traps: In focusing on personal experience, one can lose sight of historical causes, fetishize affect, and neglect communal survival. In focusing on collective rebuilding, one can intrude on memories of powerlessness with a promise of resilience, and block pathways for cross-ethnic solidarity.

American and Israeli Jews encounter different challenges and resources when remembering the Holocaust, an event critical to the self-definition of both communities. Recognizing these different memory ecologies does not negate the need to discuss contemporary politics, the Israeli-Palestinian conflict especially. Rather, recognizing such differences can create the conditions in which difficult political discussions can be had. Expecting or forcing uniformity among different Jewish communities can lead to disappointment and discord. By contrast, if the current political gap between these American and Israeli Jews is approached as a symptom of misunderstanding rather than its cause, more avenues of authentic dialogue might emerge.

Hannah Pollin-Galay is senior lecturer in the Department of Literature at Tel Aviv University, where she teaches on Yiddish, oral narrative, and memory. 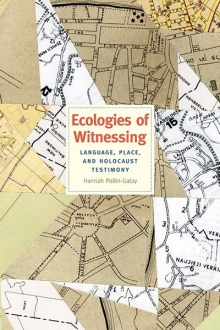 Featured Image: On December 27, 1948, LIFE magazine featured this photograph of a young war refugee, Tereska, “Children’s wounds are not all outward. Those made in the mind by years of sorrow will take years to heal. Photograph courtesy of David Seymour-Chim/Magnum.