Maroons were tiny communities of escaped slaves who held an in-between status in many New World slave societies, somewhere between freedom and captivity. They avoided the brutality of slavery but confronted the abuses that came from being black in a white society. During the 1790s, a community of Jamaican Maroons was deported to Nova Scotia and after four years, moved to West Africa. Their survival in exile provides an unsentimental, perhaps unsatisfying reminder of human aspirations. We can look to them to rethink our notions of freedom and heroism in face of unimaginable obstacles.

With 600-700 members, the Trelawney Town Maroons comprised the largest escaped slaved community in Jamaica during most of the eighteenth century. In the 1740s, after decades of painful war with the slaveholders, these Maroons secured their own autonomy by providing a valuable military service to slave society. They captured runaway slaves, and sometimes even killed them. In this way, the Maroons prevented the emergence of new Maroon societies in the mountainous Jamaican interior. By preserving slavery, the Maroons lived a life of “freedom,” which meant that they had enough food for their families, they escaped the whip, and they lived longer lives than most slaves. The Maroons knew the humiliation of slavery as well as its possibilities. Most Maroons used Christian names such as “Andrew Smith,” “Sophia Ricketts” or “Charles Shaw.” Some became slaveholders.

Still the Maroons remained vulnerable. In 1796, after an unexpected war with the slaveholders, 550 of the Trelawney Town Maroons were tricked into deportation to Nova Scotia, also a British settlement. What is striking about their time in Canada is their refusal to touch the hoe while offering themselves as soldiers in Britain’s fight against France in Halifax. Some Maroons in fact punished other Maroons ready to work the soil. The Maroons saw no contradiction between taking a secret African-derived blood oath and sending their teenage sons to a Christian school. No evidence has emerged about Maroons’ interaction with free blacks or with indigenous people in Halifax but we know that the local government saw the Maroons as a notch above both groups. The Maroon refugees were special: They drew sentimental attention for their comportment, their resistance to agricultural work, their loyalty, and most of all, their openness to creolization.

After four years in Nova Scotia, the Maroons asked to be sent away from the cold for they would never thrive “where the pineapple does not.” Sierra Leone, a British colony in West Africa, in need of people ready to endure frontier and unfavorable conditions, received these refugees. As soon as the Maroons reached the capital of Freetown, they showed their loyalty to the British by suppressing a rebellion launched by an earlier group of black refugees (The Maroons suppressed the black loyalists of the American Revolution, many of whom had resettled in Sierra Leone in 1792). But the Maroons honored other allegiances as well. When their brethren died from yellow fever and other diseases, they demanded compensation in kegs so their infant children and grandparents could be sent off properly to the otherworld. Their grief compelled concessions. Once settled in Freetown, the Maroons built a Christian chapel, employed Africans as servants, and as they had in Jamaica, sought advancement through favors from British patrons.

The Maroons knew that home—safety, security, strength—came with relationships, not place. Unlike the utopian nation, Wakanda, portrayed in Black Panther, the Maroons knew there was no final paradise.

Ruma Chopra is professor of history at San José State University and the author of Unnatural Rebellion: Loyalists in New York City During the Revolution and Choosing Sides: Loyalists in Revolutionary America 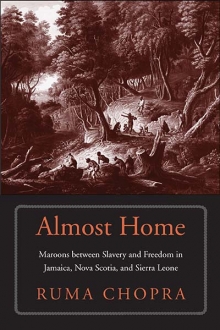