The law is society. It is a reflection of the community, it is the rules that govern the community, and it is one of the main tools that a government has to affect the behavior of the community. A government can encourage philanthropy by providing tax deductions to donors and allowing some organizations to avoid taxation.

All societies have some sort of method or forum for resolving disputes. The rules that develop around dispute resolution systems and the disputes recognized by the system offer concrete examples of what a society values. The details of disputes also provide insight into the lives of persons and transactions not often captured in other sources of information.

By digging into the details of the law, a person can move beyond what politicians or influencers in a society say about their values and see how their actions actually impact people. Famously, powder cocaine and crack cocaine have drawn different sentences. Historically, there has been a racial division between users of powder and crack cocaine. The Fair Sentencing Act of 2010 reduced the sentencing disparity between the two forms of the drug. The law about cocaine sentencing provides someone studying society with three eras to compare and two decision points to examine. They can compare similarities and differences in the period before the rise of crack cocaine up to the implementation of disparate sentences; the era of the disparate sentences; and the current era, in which the disparity is somewhat reduced. The decision to implement extremely disparate sentences and the decision to reduce the disparity provide a researcher a place to study why and how decisions like this are made.

The American legal environment is especially interesting because of its varied origins. Our law is built upon a thousand years of precedent; twelfth-century cases are still cited by federal courts. Our law is made by multiple sovereigns. Here in New Haven, I am limited by the laws of the United States, the laws of Connecticut, and the ordinances of New Haven. There are multiple lawmakers within each sovereign: each of the three branches of government has lawmaking power.

It is hard for us to imagine life in the fourteenth century, but the famous case I. de S. & Wife v. W. de S. (1348 or 1349) might help. In this case, a case still cited today, a man wanted a drink so he went to a tavern to find it closed. He tried to break in using a hatchet that he had in his hand. When the tavernkeeper’s wife stuck her head out the window and refused him entry, he threw the hatchet at her. Luckily, he missed. To lawyers, this case is important because it recognizes that an assault can occur without physical contact. This represents an important step in the evolution of tort. To others, aspects of the story sound familiar, if a bit overwrought. Even today some people are disappointed at closing time, although throwing a hatchet doesn’t feel very twenty-first century. To others, the year of the decision is important: 1348 is the year that the plague came to England.

The law and legal materials can serve several functions, but context is necessary to find and understand the law. Before embarking on a search for legal materials, it’s important to know what is likely to have survived or been saved. Material is created as a part of the passage of a law or the process of a lawsuit. The law-creation purpose controls the type of material that is generated. Once a law is made, it is most often used in legal argumentation or discussion. The rules of the forums in which the material is used apply pressure leading to some material being saved and distributed and other material being warehoused, lost, or destroyed.

A researcher who encounters legal materials will need to know more than what might still exist. She will need to know that appellate court opinions are easier to locate than trial court opinions and that briefs, documents filed with a court that make a legal argument, are easier to locate than exhibits or transcripts. The researcher will have to contend with the fact that the law is created over time and thus appears in the world chronologically, but that most people seek out an area of law based on topic.

Whether you want to read the law or ignore it, law and lawmakers are all around. Understanding what the law is and where it comes from can help us understand the idiosyncrasies of the law. Frequently, we can learn a lot about how and why a law was made. On the other hand, we know almost nothing about the would-be drinker and the tavern-keeper’s wife— not even their names. 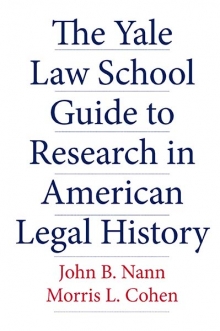