It’s something of a miracle that any of our ancient literary masterpieces survived the downfall or shift of civilizations, since they all might easily have been lost. Of Heraclitus’s profound insights, we have only tantalizing fragments. Of Sappho’s nine books, there remain just four poems and scattered verses of incomparable loveliness. Of Aeschylus, six out of ninety plays; of Sophocles, seven out of 123. Gilgamesh, the oldest of our masterpieces (its final version was written around 1200 BCE), disappeared for two thousand years: the baked clay tablets on which it was inscribed in cuneiform characters lay buried in the rubble of cities across the ancient Near East, and it wasn’t until 1850 that the first fragments were discovered among the ruins of Nineveh.

Beowulf too dropped out of existence for centuries. It was probably unread after 1066 CE, when the Norman Conquest changed the nature of the English language. The single manuscript in which it survives, copied onto vellum around the year 1000, sat on the shelf of a monastic library until it found its way into the collection of Sir Robert Cotton (1571–1631), an antiquarian and a member of Parliament. In 1731, a fire broke out in the building where the collection was being stored, destroying a quarter of its books and manuscripts. Before the Beowulf manuscript was saved (someone tossed it out a window), the top and the outside edge of each leaf were badly scorched. In 1787, an Icelandic historian named Grímur Jónsson Thorkelin prudently commissioned a transcript. Even as the transcriber copied it, the charred edges of the leaves were crumbling away; many of his readings go unrecorded in Thorkelin’s own, later transcription, and scholars estimate that nearly two thousand letters lost in the manuscript as a result of fire damage can be restored on the basis of these transcriptions. Finally, in 1845, librarians mounted the leaves on paper frames and re-bound them, thus putting an end to any further deterioration. Thorkelin published the first edition in 1815, and the poem began to be studied and translated during the following decades. But it wasn’t until J. R. R. Tolkien published his famous paper “Beowulf: The Monsters and the Critics” in 1936 that readers began to recognize its status as a great literary work of art.

No one knows who the author of Beowulf was, or when he wrote it, or precisely where in England. Among historians and literary scholars, opinions on the date of its composition have ranged anywhere from 650 to 1025, while most linguists and archaeologists date it between 700 and 750.

The poem’s story is simple. Beowulf is the nephew of the king of the Geats, a people who lived in southern Sweden. When he hears that an allied people, the Danes, have been attacked by Grendel, a huge, cannibalistic ogre, he volunteers to help them, sails to Denmark, and single-handedly kills Grendel and Grendel’s equally murderous mother. The second part of the poem takes place fifty years later, after Beowulf has become the king of the Geats. A slave steals a gold cup from a dragon’s hoard, and in retaliation the monster goes on a fiery rampage, destroying people, buildings, and the whole countryside. Beowulf kills the dragon, but in the fight he himself is mortally wounded. The poem ends with his funeral and eulogy.

The poet who wrote Beowulf may have believed that these Geats, Danes, and other neighboring Germanic tribes were like his own ancestors, Angles, Saxons, and Jutes who had migrated from Denmark and northwest Germany and conquered Britain in the fifth and sixth centuries and whose language had mostly supplanted the Celtic of the British inhabitants. Two or three centuries later, the Anglo-Saxon nobility enjoyed special civil liberties and patronage in comparison with commoners and slaves.

Christianity had come to England in the second or third century, and by the end of the seventh century most of the island was nominally Christian. The great majority of scholars today believe that Beowulf is a Christian poem. But the poet’s Christianity is peculiar. His only biblical references are to the book of Genesis; he never refers to the Gospels. Nor does he make any mention of Jesus or of the fundamental beliefs that differentiate Christianity from Judaism, though it would have been natural for him to do so. For example, in the only doctrinaire passage in the poem—a passage so atypical that Tolkien was convinced that it must have been interpolated or altered by a reviser—the poet mentions that some Danes, in despair over the horrors of Grendel’s attacks, were driven to idolatry:

Some of them even prayed to idols,
made pagan sacrifices, and pledged
themselves to the Slayer of Souls, to gain
help from this horror. That was the thing
those heathens hoped for; deep in their hearts
they served the devil. They did not know
God Almighty, the Judge of Men,
and could not give praise to the Prince of Heaven,
the King of the World.

It would have been easy to insert a Christian reference in this passage, something on the order of:

They did not know
God Almighty, the Judge of Men,
and could not be saved by Jesus Christ,
His only son, who died for our sins.

By contrast, the ninth- or tenth- century author of the Old English poem Judith doesn’t hesitate to use anachronistic Christian expressions about the Jewish heroine (“the Savior’s servant”) and the Babylonian villain Holofernes (“despised by the Savior”), and he calls God “God of creation, Spirit of comfort, Son of God, . . . glory of the Trinity” (83–86).

In Beowulf, though the poet or his characters refer to God more than four dozen times, there is never any mention of a savior.

From Beowulf translated by David Bates. Published by Yale University Press in 2017. Reproduced with permission.

Stephen Mitchell’s many books include Tao Te Ching, which has sold over a million copies, The Gospel According to Jesus, Bhagavad Gita, The Book of Job, Gilgamesh, and The Iliad. 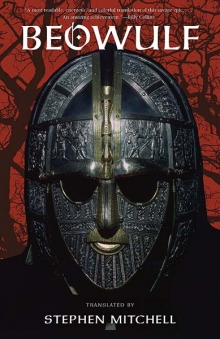