We find much of what is said about free speech on college campuses unsatisfying. We are deeply troubled by the efforts to suppress and punish the expression of unpopular ideas. Those who call for punishment of speech that makes students feel uncomfortable fail to recognize the importance of speech and the danger in giving the government the power to regulate it.

But at the same time, much of the criticism of current students and their sensibilities fails to reflect the laudable compassion that motivates them. Greg Lukianoff and Jonathan Haidt, in a cover story published in the Atlantic titled “The Coddling of the American Mind,” warn that accommodating students’ concerns can even undermine their mental health. “Vindictive protectiveness,” they write, “prepares [students] poorly for professional life, which often demands intellectual engagement with people and ideas one might find uncongenial or wrong. The harm may be more immediate, too. A campus culture devoted to policing speech and punishing speakers is likely to engender patterns of thought that are surprisingly similar to those long identified by cognitive behavioral therapists as causes of depression and anxiety. The new protectiveness may be teaching students to think patho- logically.”

But mocking these students or treating their concerns as pathological misses the mark. It is hardly a constructive approach to the tensions over offensive speech on college campuses. Nor is the response that students should “suck it up” and deal with it, which harkens back to a thankfully bygone age when racial and ethnic slurs were more common, disrespect of women was more acceptable, LGBT people were ridiculed and tormented, and teachers and coaches routinely used shaming to discourage poor performance.

Society is better now, and students are right to expect empathy for victims of hate and intolerance. Telling them to “toughen up” does not address their laudable desire to create a campus that is inclusive and conducive for learning by all students. Words can cause real harm and interfere with a person’s education. Campuses have the duty to act—sometimes legally, always morally—to protect their students from injury. The challenge is to develop an approach to free speech on campus that both protects expression and respects the need to make sure that a campus is a conducive learning environment for all students.

From Free Speech on Campus by Erwin Chemerinsky and Howard Gillman. Published by Yale University Press in 2018. Reproduced with permission. 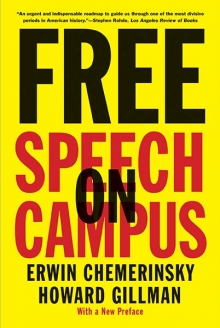