Even the most hidebound analytical historian can’t resist the archetype of the hero. The hero comes forward  at the beginning of great events, sets out on a quest, often against a terrifying foe, and in the process wins glory for himself. At the founding of the United States, one hero stands out: George Washington.

Historians like Mason Locke Weems, who first told his story, wrapped him in clouds of glory that made him seem perfect. Even in his childhood, Washington could not tell a lie and so confessed to his father that he chopped down the cherry tree. As a boy, he already held a sword in his hand, ready to take on every foe, whether the French, the Indians, or ultimately the British. Like Aeneas, who fled burning Troy and later founded Rome, he won glory for himself while also establishing the United States of America.

No matter how much historians have tried to make Washington a living, breathing, flawed person, he seems to re-emerge as an ancient archetype. From Douglas Southall Freeman, to James Flexner, and finally to Ron Chernow, Washington remains forever the hero. Maybe Carl Jung, the psychoanalyst who first explored the power of archetypes, was right. We carry core stories within us that no writer can ever completely escape. But going to the opposite extreme, maybe Washington will always be a hero because he was a hero in fact, not merely in myth. From his courage in the French and Indian War, to his steady leadership all the way to Yorktown, and finally to his refusal to become America’s new king, he behaved like no other man in history ever had.

There is one more possibility. Maybe Washington remains a hero because the people who knew him, especially his youngest officers, saw him as one. There was the Marquis de Lafayette, fresh from France at only nineteen, who idolized Washington. There was the even younger James Monroe who can be seen to this day standing behind Washington as they cross the icy Delaware in Emanuel Leutze’s famous painting that takes up a wall in New York City’s Metropolitan Museum of Art. Finally, there was a general from Pennsylvania, thirteen years younger than Washington, who did more than any of his fellow officers to raise up their commander as the perfect hero. He was Anthony Wayne.

When Wayne first met Washington in April 1776, he could barely see the real man in front of him. Instead he viewed Washington as the exact copy of his greatest hero, Julius Caesar. After the losses at Brandywine and Germantown, Wayne realized that Washington was not Caesar and so came to doubt him. But by Valley Forge, he decided that Washington was a new kind of hero greater than Caesar. He might lose every battle but, through the sheer strength of his character, he would win the war in the end. After the Revolution, when the United States seemed to be breaking apart, Wayne urged Washington to accept the presidency. He even used his hero’s name as a freestanding noun when he reminded him that their nation needed “a Washington.” If to this day, Washington seems a marble statue of the perfect man high on a pedestal, Wayne should get credit for helping to put him there.

In histories where Washington, the perfect hero, stands at the center of everything, there is little room for a seriously flawed man like Wayne. Unlike Washington, Wayne could never be described as perfect. If he thought or felt something, he expressed it with no fear of the consequences. His temper was volatile enough to give rise to the nickname “Mad Anthony,” meaning his anger was explosive. As the Revolution dragged on, he was plagued by depression and bouts of heavy drinking, which grew worse after the war ended and haunted him during the campaign that led to Fallen Timbers. These traits barely scratch the surface of his many failings, which also include womanizing, debts leading to near bankruptcy, and charges of political corruption.

Trying to tell the story of a flawed general like Wayne in the face of the bright light of Washington’s perfection has been a problem for historians. His earliest biographers solved this by concentrating on the vivid letters that he wrote about his military service in the Revolution. Horatio Moore, Wayne’s first biographer, linked some of his best letters together in the 1845 work, Life and Services of Gen. Anthony Wayne. The next important biography of Wayne came in 1893 when Charles Stillé, director of the Historical Society of Pennsylvania, used the same format in Major-General Anthony Wayne and the Pennsylvania Line in the Continental Army. In 1941, Harry Emerson Wildes published a more complex biography after gaining access to Wayne’s private family papers. Wildes’ work provided a glimpse into the darker shadings of Wayne’s character, but, in the end, emphasized his military career as evidenced by its title, Anthony Wayne: Troubleshooter of the American Revolution.

Biographers working since Wildes have faced a dilemma: to write Anthony Wayne’s story mainly in military terms, and, by so doing, restore him to his rightful place at the side of his hero Washington; or to portray him as a more modern archetype, the anti-hero with all his faults, on and off the battlefield, and so widen the story of the American Revolution to include individuals who, despite their flaws, created a new, and hopefully better nation, than ever founded before.

Mary Stockwell is the former chair of the history department at Lourdes University in Ohio and the author of The Other Trail of Tears: The Removal of the Ohio Indians. 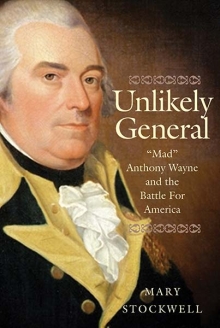