According to the World Bank, with a population of 25 million people Australia is the fifty-third most populous country in the world, ranking below North Korea and above Côte d’Ivoire. But despite this sparse population, Australia is a sporting giant – at least in the summer. The land down under has participated in every Summer Olympics, hosted them twice, and placed 4th, 4th, 6th, 8th, and 10th respectively in terms of medal counts since 2000. The Winter Olympics, however, are a different story. Australia has participated in the Winter Olympics since 1936 (skipping only 1948), but only won their first medal—a bronze—in 1994.

This relatively dire state of affairs prompted the Australian Institute of Sport (a government-funded sports training institute founded after Australia embarrassingly failed to win any medals at all in the 1976 Montreal Olympics) to take a cold, hard look at their training and selection processes for winter sports. In the early 2000s, they saw a unique opportunity. The sport of skeleton, which involves leaping onto to a tiny sled and hurtling head first down an ice track at speeds of up to 129 km/h (or 80 mph for non-metric types), was to be reintroduced as an Olympic sport in 2002 for the first time since 1948. Taking advantage of the fact that the entire world at the time harbored less than 100 female skeleton athletes, only about half of whom had competitive experience at the highest international level, researchers at the AIS set out to identify and train female Australian athletes to compete in skeleton and hopefully bring home at least one small, metallic disc to add to their existing national collection of small, metallic discs.

The AIS built their skeleton talent-recognition program on an interesting finding: crunching the numbers on female skeleton race performance showed that up to 40% of the variation in race times was explained by the push start, the explosive, bent-over, thirty-meter run at the very start of the race culminating in a controlled jump/fall onto the sled itself. The selection process for potential skeleton competitors therefore consisted primarily (though not entirely) of clocking female competitive athletes sprinting over a distance of thirty meters. This program, which AIS researchers called “Deliberate Programming” identified ten potential skeletoneers with backgrounds in sports ranging from track sprinting to surf lifesaving, four of whom were selected to make up the first ever Australian skeleton team. Of those four, one athlete, surf lifesaver/gymnast Michelle Steele, qualified for the Olympics a scant fourteen months and 220 skeleton runs after learning that “skeleton” was a sport.

Sadly for any Hollywood producers who might have enjoyed Cool Runnings and thought that there should be another movie exactly like it except with Australians and skeleton, Steele did not win a medal in the Turin Winter Olympics. Even more sadly, Australia has yet to ever win an Olympic medal for skeleton. But let’s be clear: to go from skeleton novice to placing thirteenth out of twenty-four competitors in the Winter Olympics in a little over a year, as she did, is nothing short of remarkable. The AIS’s skeleton talent recognition program is thus a fascinating case study in specialization and in understanding the athletic abilities that underly specific sporting events. In this respect, the approaches used by the AIS mirror in some ways those used by biologists to understand the performance bases of ecological tasks such as prey capture, dispersal, or male-male combat performed by non-human animals.

Within the animal world, we tend to find that specific performance abilities are affected by an animal’s shape, including that of its skeleton. It is fitting, then, that similar methods allow us to understand variation in the sport of skeleton as well!

Simon Lailvaux holds the Virginia Kock/Audubon Nature Institute Chair in Species Preservation in the Department of Biological Sciences at the University of New Orleans. His research group investigates ecological and evolutionary phenomena related to performance. He is the author of Feats of Strength. 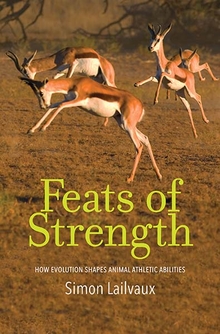