The Jewish identity of Harvey Milk—arguably the most famous gay man in modern history—was as important to who he was and what he did as his gay identity. In San Francisco where he became a prominent gay leader and politician in the 1970s, he often introduced himself as a “New York Jew.” He liked the upfront bluntness of the appellation; but it also described a personal history that was formative for him.

Harvey Milk was born on Woodmere, Long Island in 1930. His grandfather Mausche Milch had been a Yiddish-speaking peddler from Lithuania who’d made good in America, opening the town’s first department store and co-founding its first synagogue. Like much of Long Island in the early decades of the twentieth century, Woodmere had been a hotbed of anti-Semitism. In the 1920s, Mausche and several other Jews who wanted to affirm their American success tried to join the local country club—but they discovered it had a “no Jews” policy. Mausche helped establish a Jewish country club. In the 1930s, a music teacher was rejected for a position by the Woodmere School Board because she was Jewish. Harvey’s father Bill, together with other Jewish parents, fought the school board until she was hired.

Harvey learned not only those stories but stories about the Klan marching regularly on Long Island in the 1920s; he learned too of the German-American Bund, a Nazi organization that held huge rallies on Long Island throughout his childhood. In 1943, six days before his bar mitzvah, the Warsaw Ghetto fell. Harvey remembered all his life the adults around him explaining that the Jews of the Ghetto who fought to the end knew they were doomed, but “when something that evil descends on the world, you have to fight, even when it’s hopeless.” Such things left an indelible stamp on him. They affirmed for him his identity as a Jew, and they helped determine who he became as a political figure.

In 1947, on his own for the first time and a student at the New York State College for Teachers in Albany, Harvey sought to carry on the Jewishness he’d learned at home. He joined a Jewish fraternity, and he attended Sabbath dinners at the campus Hillel and meetings of the Intercollegiate Zionist Federation of America. Coming home for winter break one year, he visited a high school friend, a Catholic, whose family was hanging Christmas lights. “Here, let me help,” Harvey said, and he was given a section of lights to hang. Always a cutup—but also lest anyone forget who he was—Harvey fashioned his section into a twinkling Star of David.

Years later, when Harvey opened Castro Camera in San Francisco, he displayed his bar mitzvah photo prominently on a wall in the store. He loved to talk Yiddishkeit with his Jewish customers. Elected to the San Francisco Board of Supervisors and swamped with official duties, he was nevertheless visited often in his office at City Hall by Henrietta Abrams, an elderly constituent who called him her “little Jewish prince.” Henrietta, who’d learned of Harvey’s sweet tooth, baked him cookies and brought them to him on the bus. According to Harvey’s assistant, Anne Kronenberg, Harvey would usher Henrietta into his office, close the door, and together they’d munch cookies. Their talk was sprinkled liberally with Yiddish.

But Harvey’s Jewishness went far beyond such charming sentimentalities. He once declared, “Jews know we can’t allow discrimination—if for no other reason than we might be on that list someday.” There may have been a degree of wryness in the statement; but it also hints at how marked he was by what he’d learned in his youth of anti-Semitism. The Holocaust became a major metaphor in his speeches, decades after the tragedy. In 1978, Proposition 6 qualified for the California ballot. If passed, the Proposition would have prohibited gay people from working in any capacity in the public schools. Harvey was a leading figure in the fight against it. The witch hunts that its passage could trigger seemed to Harvey to have catastrophic potential; and his very emotional speeches often referenced the greatest catastrophe he knew. “I cannot remain silent anymore,” he told one audience. “There was silence in Germany because no one got up early enough to say what Hitler really was. If only someone did, maybe the Holocaust would never have happened.” He told another audience, “Just as Proposition 6 would prevent gay people from teaching in the public schools, so forty-five years ago did the German law prohibit Jews from teaching or holding any other civil service positions.” He gave fevered warnings: to ignore the deadly threat to which Proposition 6 would lead, he said, was “to be like Jews in Nazi Germany as they were being loaded into box cars and hoping they will be treated nicely and not put into the ovens.”

But the Jewishness that Harvey brought to his politics went beyond such frenzied fears. From his mother (who died of a heart attack in 1962 after delivering a twenty-four-pound turkey to a settlement house so the poor could have a Thanksgiving dinner) Harvey learned the obligation of tikkun olam. For him it meant championing not just the gay people who had been largely responsible for putting him in office, but all those who were discriminated against or oppressed. Harvey served on the San Francisco Board of Supervisors for only eleven months before he was assassinated. In that brief time, he fought hard to pass a strong gay rights bill—but he fought equally hard for rent control, for humane treatment of troubled youth, for the city’s divestment from apartheid South Africa. He fought for the rights of workers, women, the disabled, racial minorities, and senior citizens. Though as an adult Harvey Milk rejected the religion in which he’d been brought up, he adhered closely to one of its major tenets.

Lillian Faderman is a distinguished scholar of LGBT and ethnic history and literature. She has received numerous awards for her previous eleven books, three of which, Surpassing the Love of Men, Odd Girls and Twilight Lovers, and The Gay Revolution, have been named by The New York Times as Notable Books of the Year. Her latest book is Harvey Milk: His Lives and Death. 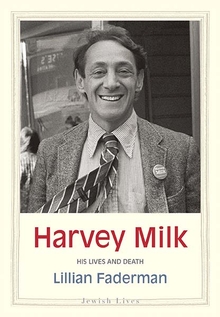