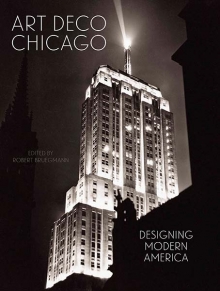 If I had to pick a single object to suggest what we tried to do in Art Deco Chicago, I would probably choose this Craftsman brand portable air compressor sold by Sears starting in 1939.

During the meetings we held with authors, editors, and advisors to settle on a list of objects to feature in the book, everyone loved this design. We also liked the fact that it would be unknown to most readers and would suggest that we were considering Art Deco in a much broader way than most observers to date.

At first we found it difficult to understand why this compressor has remained in relative obscurity given the remarkable composition of abstract forms and bold colors and the fact that it has been in the collection of the Montreal Museum of Fine Arts. On further reflection, of course, this relative obscurity is not surprising. The compressor was not the product of a solo American designer like Raymond Loewy whose name could fit on a museum label in much the same way as that of a painter or sculptor. It was almost certainly the work of an in-house team of designers at Sears and had to go through a chain of approvals including that of John Morgan, the chief designer, and A. J. Snow, the head of Department 817, Merchandise Development and Testing Laboratory, and then a review and possible revisions by the manufacturing team.

Not even Raymond Loewy, however, has commanded as much attention and respect as the designers of the European avant-garde. The high-minded critics and historians who invented the term “Modern Movement” for the kind of design they preferred were not likely to spend much time looking at a mass-produced object sold by a Chicago mail order house to a largely working- and middle-class American buying public. They were more interested in designers who rejected middlebrow norms and claimed that they could change the world by designing for everyman using the aesthetic standards of a small professional elite.

The irony, of course, is that the Sears compressor as well as the radios, bicycles, refrigerators, and other products that poured out of Chicago from companies like Schwinn, Sunbeam and Motorola to satisfy a newly created mass consumer market did change the world in ways that the designers of the Bauhaus could only dream of. Chicago companies gave an enormous public stylish products of a kind that were once available only to large companies or the wealthiest members of society. The portable compressor, for example, greatly facilitated tasks like spray painting for individuals and small companies and helped to bring down construction costs and spawn a vast growth in do-it-yourself projects.

Another reason many of us on the book team wanted to include the compressor was the way it challenged the traditional notion that the term “Art Deco” should be restricted essentially to French-inspired luxury products of the 1920s. Since the term was first popularized in the 1960s, its scope has been continuously expanded by the large and highly enthusiastic band of Art Deco enthusiasts even if many scholars to this day avoid the term or try to rein in its meaning. Although not everyone on our team agreed, we ultimately made the decision to use a big-tent definition of Art Deco, one that includes much of the design of the period ca. 1910–1950 that wasn’t strict historic revival on the one hand or European avant-garde on the other.

It is possible that some readers will feel that this tactic has resulted in stretching the definition out of all recognition. On the other hand, it has the virtue of giving a name to the kind of moderate middle-class modernism that the Chicago region produced in such quantity. The city’s most important strength has always been to take ideas from everywhere, simplify and modify them for ease of construction or manufacturing, and then provide widespread distribution for the resulting ideas and products.

Chicago did a similar thing in architecture. Although the city could boast nothing to equal the sophisticated glamour of the Chrysler Building in New York City or the opulent decoration of the Richfield Building in Los Angeles, the Palmolive Building by Holabird & Root was perhaps the prototypical example of the stepped-back buildings of the late 1920s. Beautifully integrated in massing, stripped of all inessential elements but embellished with spare but elegant ornamentation at critical points, the Palmolive set a standard that was followed in cities across the country.

The compressor and the Palmolive are marvelous examples of what Chicago did best. We felt that they, along with many other products and buildings, deserve to be better known as examples of the enormous contribution Chicago made to modern design as well as to modern living in the 20th century.

Robert Bruegmann is distinguished professor emeritus of architecture, art history, and urban planning at the University of Illinois at Chicago.