Many who declare that Americans in 2018 should stick to the original words of the United States Constitution, ratified in 1788, fail to acknowledge that in reality the nation has been ruled by a substantially different Constitution for the past 150 years.  The Union victory in 1865, and the amendments Republicans quickly enacted, gave this nation a new Constitution—one where, increasingly, national, not state, standards ruled.  The consequences of this new Constitution have been profound.

Advocates of religious freedom typically rest their arguments on the First Amendment (1791), because it prohibited Congress from making any “law respecting an establishment of religion, or prohibiting the free exercise thereof.”  What many fail to acknowledge, however, is that originally every state was free to establish a religion or to block its free exercise.  Under the original Constitution, the state of New York could create a loyalty oath that barred Catholic immigrants from citizenship and suffrage, and it did.  Under the original Constitution, Massachusetts and Connecticut could provide tax support for Protestant churches, and they did. Up and down the Atlantic seaboard, states that professed religious freedom commonly limited office holding to Protestants.  In the early republic full religious freedom as we understand it today, was scarce.

That the original Constitution never provided equal rights for African Americans, free or slave, is undeniable.  Nor did it supply citizenship to free blacks.  As with religious liberty, citizenship qualifications were left to the states.  A majority actually recognized free people of color as citizens, but some did not.  Moreover, as decades passed and free blacks multiplied, increasingly states denied them citizenship—and rights. No Constitutional guarantee hindered this rights rollback. No wonder that when Congress enacted the first Naturalization Act in 1790, it excluded non-whites. In the view of Supreme Court justice Thurgood Marshall, speaking in 1987, the Constitution “was defective from the start, requiring several amendments, a civil war, and momentous social transformation to attain the system of constitutional government, and its respect for the individual freedoms and human rights, we hold as fundamental today.”

That the Constitution left the rights of women to the states is also well known.  One state, New Jersey, recognized women’s right to vote from 1790 to 1807, but then fell into line with other states, erasing that right.  Although courts acknowledged the actual citizenship of white women, when they married, their property and their children became their husband’s.  No constitution, state or national, limited husbands’ control of the property or the children. As with the rights of people of color, the Constitution provided women no recourse.  When the first women’s political movement gained force in the 1840s a few states, notably New York, enacted legislation recognizing property rights for married women.  But neither the U.S. nor any state constitution guaranteed such rights.

The Civil War created the revolution that transformed the United States Constitution. Union victory gave Republicans control of Congress, the Presidency, and more than two-thirds of the states.  Republican reformers—who aimed to cement their hold on national government and to assert national supremacy over states—now amended a Constitution they regarded as defective. In 1865, their Thirteenth Amendment ended slavery. In 1868, their Fourteenth Amendment provided citizenship—state and national—for every person born or naturalized in the U.S., prohibiting states from denying citizens equal protection.  Because states still interfered with African American voting, in 1870 the Fifteenth Amendment prohibited them from denying suffrage based on “race, color, or previous condition of servitude;” though states retained the right to prescribe voting qualifications.

From a constitutional standpoint, the advance toward racial equality was momentous—momentous, that is, for men.  Provisions of the Fourteenth Amendment specifically excluded women, and the Fifteenth Amendment omitted them, despite the National Women’s Suffrage Association’s efforts.  Though Wyoming and Utah territories already allowed women to vote, in 1873 the U.S. Supreme Court ruled that because “Man” was “woman’s protector and defender,” Illinois could prohibit women from becoming lawyers.  Divine law, the Court opined, assigned “the domestic sphere . . . to womanhood.”  For women, the Supreme Court would not even go as far as it would in its now infamous Plessy v. Ferguson case (1896), when it endorsed “separate but equal” for blacks and whites.  A generation later, the Nineteenth Amendment (1920) would provide national protection for women’s suffrage, a right already recognized by Arizona, California, Colorado, Illinois, Montana, New York, Oregon, Utah, Washington, and Wyoming.

Since the 1930s, a series of Supreme Court decisions upholding New Deal legislation has extended national supremacy far beyond post-Civil War reforms.  Consequently, it is decisions in Washington, D.C., that count most.  Politics, state and national, make actual practices inconsistent and uneven; but Constitutional protections for religion, race, and gender are broader than ever before.  Now critical policy decisions govern the entire nation and rest with the President and Congress, not the states. Whether the question is separation of church and state, guaranteeing religious freedom, civil rights like voting, or a woman’s right to equal protection of the laws, it is Congress, the President, and the Supreme Court that possess ultimate power—even though implementation and judicial interpretation may leave much to state and local government.  The Constitution of 2018 is not the Constitution of 1787, and no one should wish otherwise.

Richard D. Brown is Board of Trustees Distinguished Professor of History, Emeritus, at the University of Connecticut. His previous books include Knowledge Is Power: The Diffusion of Information in Early America, 1700–1865; The Strength of a People: The Idea of an Informed Citizenry in Early America, 1650-1870; and the coauthored microhistory The Hanging of Ephraim Wheeler: A Story of Rape, Incest, and Justice in Early America. His latest book is Self-Evident Truths. 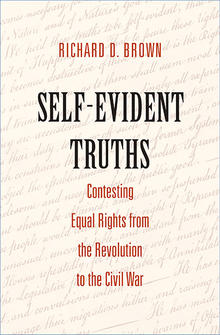