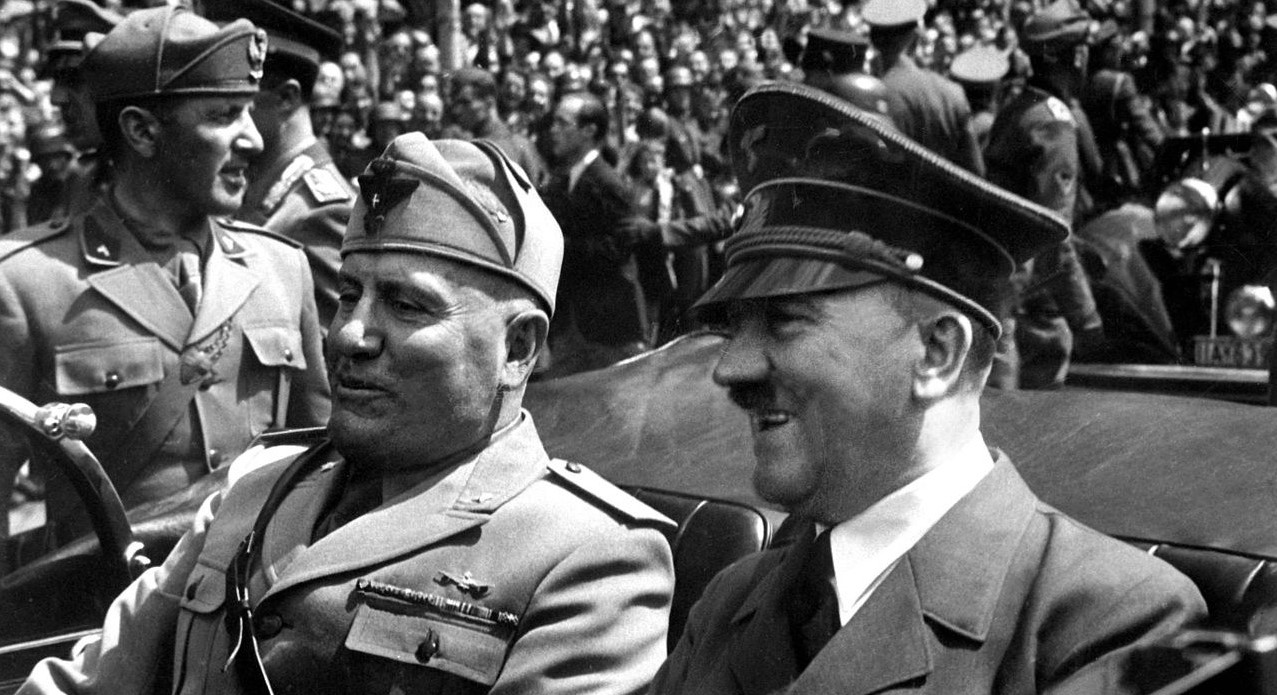 This would be the final encounter between Mussolini and Hitler, leaders of Europe’s most significant fascist dictatorships. It took place almost exactly a month after the Allied invasion of Normandy which had made a German defeat increasingly likely. A year previously, on 19 July 1943, Mussolini and Hitler had met in Northern Italy, an encounter that had coincided with the Allied invasion of Sicily and a heavy Allied bomb raid on Rome. A few days later, on 25 July 1943, the Fascist Grand Council, accusing Mussolini of failing to defend Italian interests vis-à-vis Hitler, had passed a vote of no confidence against the Duce. King Victor Emanuel III sacked him as Prime Minister, and the Mussolini was arrested. The new Italian government, led by Marshal Pietro Badoglio, soon began peace negotiations with the Allies, and, on 8 September 1943, announced the armistice, which was followed by the German invasion of Italy. A few days later, the Germans liberated Mussolini from captivity in a skiing resort on the Gran Sasso from whence he was flown to Germany to meet Hitler. The Nazi leader put Mussolini in charge of the Italian Social Republic, effectively a Nazi satellite state, in order to legitimise the ruthless German occupation of Italy.

These dramatic events stood at the end of the alliance between the two leaders and their countries which had its origins in the early 1920s. It was Hitler who first sought out Mussolini, not the other way round, given Mussolini’s position as the doyen of fascism. After his appointment as Prime Minister in late 1922, Mussolini had not taken Hitler seriously, at the time an obscure leader of a marginal far-right party. The Nazi party’s stunning success in the September 1930 Reichstag elections prompted Mussolini to take a stronger interest in Hitler’s political strategy. To be sure, the Nazis shared some ideological common ground with the Fascists, above all a strong belief in war, political violence, anti-Bolshevism, and ultra-nationalism, but the Nazis had drawn up their two core issues well before any contacts with the Italian Fascists: the conquest of living space and the solution to the ‘Jewish question’. More than a straightforward common ideology, therefore, it was Mussolini’s successful combination of political violence with seemingly legal political activity during the Fascists’ seizure of power which attracted Hitler to Mussolini in the 1920s and early 1930s, as he was preparing for the Nazi seizure of power. The Nazi leader, guided by Fascist propaganda about Mussolini’s political successes in Italy, believed that this double strategy would widen popular support for the Nazis in Germany and pave their way into power. Indeed, Hitler came to power in 1933, thanks to a similar strategy, highlighting Mussolini’s model function for the Nazi party’s strategy.

After Hitler’s appointment as Chancellor, Mussolini was concerned that Hitler might challenge his position as doyen of the European Right and threaten Italy’s strategic interests. The Duce thus postponed a meeting with Hitler. The first encounter of the two dictators, always a priority for the Nazi leader, only occurred more than a year later. In June 1934, Mussolini, in office for almost twelve years, received the new Reich Chancellor in Venice, a city associated with Fascism’s claim to dominate the Mediterranean. Photographs of the meeting illustrate the balance of power between the two dictators and show a socially awkward Hitler on his first visit abroad, wearing a suit and a beige raincoat, next to the self-confident Mussolini in uniform. While Hitler’s dress in Venice gave much rise to ridicule at the time and subsequently, matters were more complex in reality.

Soon, the relationship between the two dictators changed, and Hitler overtook Mussolini as the most powerful right-wing leader in Europe. By the summer of 1934, the Nazis had eliminated all constitutional limitations to their power. In contrast, Mussolini, throughout his rule, had to report to the King as the head of the Italian state and had to negotiate between the interests of powerful Fascist leaders and those of conservative power blocs. Indeed, it was the King who would, in 1943, unseat him.

It is tempting to depict the relationship between Mussolini and Hitler as a friendship. In reality, their relationship was ambiguous throughout, reflecting the complexity of Italo-Germans relations which were all but friendly until the mid to late 1930s. Italy and Germany, while both intent on revising the Versailles Treaty, fundamentally disagreed over the question whether Austria should be united with Germany. Moreover, national stereotypes on both sides always underpinned Italo-German relations as well as the accord between Mussolini and Hitler.

Whether or not Mussolini and Hitler were real friends is perhaps a moot question to ask. Hitler genuinely admired Mussolini’s political successes, at least until the disastrous Italian campaigns in the Second World War, and saw in him one of his few equals. More relevant in terms of our understanding of the significance of the Mussolini-Hitler alliance is that, following the gradual rapprochement between Italy and Germany in the late 1930s, Fascist and Nazi propaganda created a powerful performance of the two dictators as friends.

The show of unity, masculinity and friendship was essential to both regimes and soon became a reality for the dictators, their members of staff, and indeed millions of Europeans. Distinctions between style and substance, representation and power, were not so clearly drawn for these two regimes.

At the same time, both regimes, as part of their attack on the rules of post-1919 international diplomacy, emphasised the personal relationship of Mussolini and Hitler. These two men could dispense with established ceremonial patterns and bureaucracy and, instead, create a new style of diplomacy based on friendship which stood in opposition to the other powers in Europe. Nowhere was this clearer than in the large 1937 and 1938 encounters, with the former in particular standing for a new era of diplomacy as a direct expression of the Fascist–Nazi quest for a New Order. Like their regimes more generally, the choreography of Hitler and Mussolini’s meetings was a mix between old and new, between established diplomatic protocol and an original, even unique, relationship of two executive leaders who dispensed with bureaucratic forms of negotiating and representing international relations and replaced it with a powerful, carefully choreographed show which often led to profound misunderstandings.

Without advocating a simplistic presentist reading of the story, it is sobering to reflect on how familiar these themes sounded as I was writing this blog post in July 2018 after several summit meetings of US President Donald Trump with authoritarian leaders.

Behind the scenes, private misunderstandings, tensions, rivalry and attempts to display national superiority were always present. Yet the display of friendship and unity succeeded in disguising those discords, in ways that provided fatal to world peace. The propagandistic notion of friendship soon created its own momentum, leading to a situation in which Mussolini and Hitler, despite all their disagreements, felt obliged to believe in their special bond. The notion of friendship became a powerful edifice, the popular and political resonances of which reflected the vicissitudes of Italo-German relations and the war and made the Italo-German alliance look stronger than they were in reality.

This political display was put to its first use during the crucial 1938 Munich conference where Mussolini’s and Hitler’s aggression outperformed the efforts of France and Britain, countries they had dismissed as decadent, ‘plutocratic’, and outdated. As the Axis war turned sour, the meetings became more low-key, but still both regimes maintained the display of friendship, even until the end when neither leader could bear the other.

As I show in my book, the dictators’ relationship was overshadowed by their pretensions for world domination and by petty personal jealousies; spite and small-mindedness was equally a characteristic of their ambitions, ambitions that led to war, destruction, death and violence on a scale never hitherto seen. It would be decades before the devastating effects wrought by this lethal relationship were overcome.

Christian Goeschel is senior lecturer in modern European history at the University of Manchester, having previously taught at Birkbeck, University of London, and the Australian National University. He has also held a visiting position at the European University Institute in Florence. His publications include Suicide in Nazi Germany. He tries to divide his time between Manchester, UK, and Osaka, Japan. 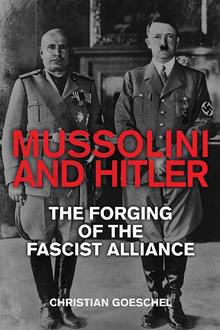