Powerful rulers have always relied on visual images to bolster their standing and seek public support for their military endeavors.  While these sorts of images can be broadly understood as propaganda, the question of their effectiveness as art in the service of power is anything but assured, since works of art with a political purpose always face an uncertain reception. In this sense, propaganda often does not reflect political intentions, but can actually serve to draw unwanted attention to the mechanisms of state power that motivate the production of such works. A series of monumental battle paintings that were produced by the mid-nineteenth century’s most important battle painter, Horace Vernet (1789-1863), are a fascinating example of this dynamic.

Vernet’s Siege of Constantine (1839), a triptych that measures 68 feet x 17 feet, and the Capture of the Smalah (1845), which measures 70 feet x 16 feet, are breathtaking in their size.  Both of these works dwarfed the artist’s earlier Napoleonic paintings several times over and made his previous works related to earlier chapters of military history appear miniscule by comparison.  Vernet’s Algerian campaign paintings employed an unprecedented format that verged on the panoramic; while these paintings dazzled audiences and attracted their fair share of praise on the part of art critics, they also inadvertently drew attention to what was understood as a troubling incongruity between their size and the relative prestige of the events they depicted.  Within the traditions of French academic painting, the scale of a painting was expected to be in direct proportion to the importance of the subject. The size of Vernet’s Algerian campaign paintings thus claimed a proportionate level of importance and prestige for Louis-Philippe’s campaign there, which struck many critics as disingenuous at best and fraudulent at worst, since for many observers in the 1830s and 1840s, the Algerian campaign was a highly suspect military endeavor. 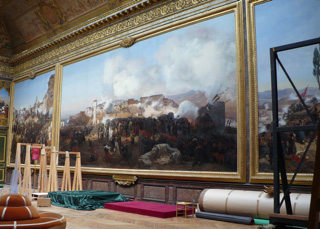 King Louis-Philippe was a close friend of Vernet’s and had been one of his earliest and most prolific patrons.  The king personally oversaw the production of these paintings by helping to ensure Vernet’s safe travel in war-ravaged Algeria in 1833, 1837, 1843, and 1845, in securing Vernet studio space at Versailles (and visiting him there as he worked on the paintings), and in terms of an ongoing dialogue about the subjects these works represented.  On each of Vernet’s voyages to North Africa, the artist traveled under the escort of the French military, since the territories he visited were hotly contested by an active resistance that thwarted French colonization efforts.  Over the course of the July Monarchy, a politically diverse array of voices objected to the conquest of Algeria for a broad range of reasons.  Utopian socialists opposed the campaign on humanitarian grounds, wishing to banish war from contemporary society; republicans and some sectors of the aristocratic elite within the July Monarchy government believed that Louis-Philippe advocated for a return to Napoleonic-style European domination; more centrist political voices were unified in their horror at the cost of the Algerian campaign, which grew exponentially over the 1830s as the military encountered a steep resistance when it encroached deeper into the interior of Algeria. This situation speaks to the ideological work that Vernet’s paintings had to accomplish. 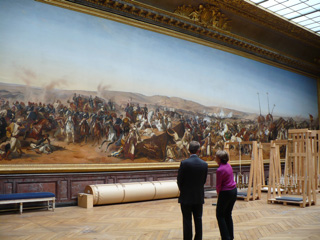 Though Vernet’s paintings were intended to counter criticisms against the campaign and legitimize it, they inadvertently produced a new line of criticism against the regime that was specifically anchored in the size of these works, which made it clear that Louis-Philippe’s government had something to prove and that it was not operating from a position of complete, unassailable power.  Vernet’s recourse to monumentality in the Siege of Constantine and the Capture of the Smala had the paradoxical effect of contravening the government’s idea of how they should signify, namely as testaments to the success of the ongoing conquest of Algeria, about the incontestable power of France’s military, and the relative importance of the conquest compared with previous efforts to conquer territory.  Writing about Vernet’s Siege of Constantine, the art theorist and critic Charles Blanc argued that Vernet “reflects his epoch: he adapts himself to the size of those who inspire his paintings and who pay for them.”  He asked, rhetorically: “Isn’t it a shame to Vernet in the service of this puerile, insipid, commissioned, and truly deplorable flattery that he undertakes without worry about the dignity of art?”[1]  In his review of the Smala, the art critic Théophile Thoré asked why Vernet used such a large canvas “for an armed encounter that certainly does not rival the battles of Alexander, of Cesar, of Charlemagne or Napoleon?” He then sardonically remarked that the canvas could be rolled up and taken back to North Africa “to make a good tent.”  His finally quipped that “the famous parasol, made on the Rue St. Denis, has been vanquished.”[2] On the one hand, Théophile Thoré alluded to the painting’s literal depiction of the French army’s destruction of the tents that comprised Abd-el-Kader’s smala.  The suggestion that the canvas could have been better used as a tent allowed him to indict the entire painting as so pitifully lacking that it could only be redeemed for the use value as fabric.  No matter that it had been painted by the hand of France’s official war artist and paid for out of Louis-Philippe’s personal funds, and was intended as a living monument to the prowess of the French military.

Such reactions against Vernet’s paintings demonstrate the pitfalls of using monumental battle painting to elicit public support; in many ways, these attacks proved prescient.  Vernet’s reputation suffered after his death in 1863 and his Algerian campaign paintings have been inaccessible to public view for most of the twentieth century and up through today, hidden behind closed doors in specially designed galleries at the Château de Versailles, where they were permanently installed after being exhibited at the Salon.  This situation is about to change: for the first time in the twenty-first century, Vernet’s most dazzling and controversial paintings will be on display.  On October 6th, an exhibition devoted to King Louis-Philippe’s renovations at Versailles will open and Vernet’s Algerian paintings will once again come under the scrutinizing gaze of the public. 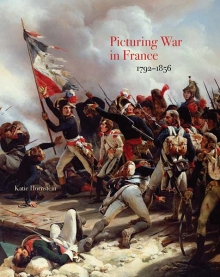