Yale UP: What did “decoration” mean to Matisse?

John Klein: Many times Matisse said or wrote that his main goal in making art was expression. He didn’t mean expressing emotions – anger, joy, fear, etc. Instead he meant that an artwork should convey the inner life of its artist in the way the elements of the artwork are arranged. The relationships among lines and colors in a painting, or the relationship between masses and voids in a sculpture: these were the things he believed would express an artist, and they would be different for every artist. This is where the concept of decoration comes in. For Matisse, decoration – the way the elements of an artwork are arranged – is the vehicle for expression. The painter expresses himself through how he composes the canvas. He also asserted that the decorative is an “essential quality” of all art, because the greatest art from any artist or any culture would share qualities of composition that would most effectively convey the creative impulse.

YUP: How would he work, typically, when designing decorative objects?

JK: For decorative paintings for domestic interiors, such as the paintings he made for Nelson Rockefeller in New York and an Argentinian diplomat named Marcelo Anchorena in Paris, he began with drawing, as he usually did when composing a painting. And for the three large figurative murals in ceramic tile for the Chapel of the Rosary in Vence, in southern France, he also made dozens and dozens of drawings in charcoal, pencil or ink studying different arrangements and poses of the figures, conscientiously revising details of hands or drapery. Drawing followed by painting was also his method for designing two tapestries in the 1930s.

But in the case of the very large Dance canvases for the Barnes Foundation in Pennsylvania, in the early 1930s, he supplemented his drawings by working with pieces of paper pre-colored for the blue-pink-grey palette he chose for this mural. He cut the forms of the dancing figures to try out various shapes and arrangements. These could then be pinned to the canvases and he could stand back to gauge the effect. And because he wasn’t painting directly on the canvas it was relatively easy to make changes by cutting into additional sheets of colored paper and recomposing. This is the origin of the method he used to design his book Jazz, and all his later stained-glass projects and textiles, and most of his ceramic tile murals. The paper cut-out was a first step in designing for these media. For these projects he was composing primarily in pure color. He adapted a new method he devised for a familiar medium – painting – to new challenges.

YUP: Tell us about some of the difficulties Matisse encountered in designing decorative objects and installations, and how he overcame them.

JK: In fact Matisse did not always overcome the difficulties! Along with several other European artists, in the late 1930s he was commissioned to decorate a vase for Steuben Glass in New York. Maybe because he was uncertain about what would be appropriate, he sent two designs drawn in pencil, one much more complex than the other. Steuben chose the complex one, but it proved to be necessary for the firm’s glass engraver to suppress an aspect of this drawing that would have translated poorly onto the curved surface of the vase. Matisse just didn’t know how to design for a transparent, curved surface.

Also in the 1930s, he was asked to design a tapestry by a leading entrepreneur in that art form, Marie Cuttoli. Matisse made a painting as a template, or cartoon. His effort, which was indeed very painterly, was translated by the weavers in a way that displeased the artist, who expected the result to be an exact reproduction of the appearance of his painting. Owing to the radically different technical requirements of a textile, this kind of “copying” was just not possible. Cuttoli sent him back to the easel. Matisse’s second effort, more appropriate for adaptation to tapestry, was unfortunately not woven. He was learning to anticipate how a work of decoration would be made, but this learning was fitful.

Now the successes. When Matisse designed the illustrations for his landmark book Jazz, in the 1940s, he professed not to be happy with the result. But he learned from his eventual acceptance of the outcome that a design is an indication to those who carry the design forward into a final product, in this case a printed book. A design is not for replication; it must be translated. In the case of Jazz, what began as cut paper pinned to a surface – with distinct textures, variations in the coloring, and edges that sometimes lifted off the surface – was translated into smooth, flat shapes of uniform printed color. But this uniformity was a key to the pictorial language that would make his later, large-scale decorative projects such triumphs, and he seemed to recognize the desirability of certain impersonal qualities in what he called “the ultimate materials.” These creations were products of his mind, not his hand.

Another example of a challenge – a considerable challenge – successfully met is Matisse’s designs in the late 1940s and 1950s for stained-glass windows, for the Chapel of the Rosary and elsewhere. For these projects he was using the cut-paper method, making opaque designs that would be translated by skilled glass workers into the transparent and translucent results. He understood this distinction from the beginning and tried to take account of the inevitable differences that would arise from the translation of his designs. These windows are among Matisse’s most successful and satisfying decorations.

YUP: What was happening in France at the time and what role did Matisse’s decorative work play in that context?

JK: In the period in which he was most active in designing for decorative objects and for architectural media – the 1930s until his death in 1954 – France went through enormous changes and challenges. It’s sometimes not obvious how Matisse’s decorative work reflects and indeed participates in some of these national transformations, but understanding something of the political and cultural context can enhance our appreciation of the artist’s goals and achievements.

In the 1930s, he participated in a cultural florescence in France of the kinds of luxury industries – such as tapestry – that were such important elements of the country’s self-image. During World War II, with France’s early defeat and occupation by Germany, Matisse’s work in general seemed more restrained, and sometimes fatalistic. This sobriety and gravity also characterized his decorative work in this period. From the themes of death and mayhem in Jazz (which at one point he characterized, astonishingly, as “my atomic bomb’) to the sublimated violence of Leda and the Swan, his painting for Marcelo Anchorena, Matisse’s decorative work acknowledged a dark period in France’s history. But his patriotism also shone through numerous artworks, and he considered it his mission – despite offers of safe transport to the US and elsewhere – to support the cause of France by staying in his country and continuing to work.

Then, in the postwar period, Matisse’s decorative designs joined many other French artistic and other cultural initiatives to restore the country’s damaged prestige and place in the world. His tapestries, other textiles, stained-glass windows and ceramic tile murals all helped to re-assert the importance of French cultural production in both old media and new. Such beautiful and restorative artistic expressions participated in the national effort of recovery.

YUP: How does your focus on decoration change our view of Matisse’s work, and even of modernism? 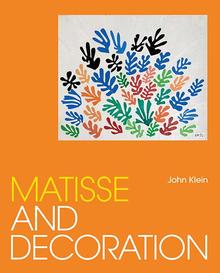 JK: We – and here I certainly include myself – tend to think of modernist achievement in the visual arts as the product of strong individual creators. There are of course many exceptions to this cult of individuality. The various collective efforts in the historical avant-gardes of the late nineteenth and early twentieth centuries, such as the transpersonal emphasis on abstraction in Russia and the early Soviet Union, de-emphasized individual achievement. But unique creative figures still stand out in our histories of modernism. I have written a book about Matisse, but I hope it will be understood as being about more than Matisse. Without slighting his undeniable creativity and innovation, collaboration played an increasingly important role in realizing his goal to conceive sometimes monumental artworks that could never have been made by a single person, however talented and indefatigable. As he matured and aged, Matisse became ever more ambitious for the environmental impact of his art. He wanted to surround himself with beauty and restorative calm. Why shouldn’t that also have been his goal for the benefit of other viewers who had the good fortune to live with his decorations? I hope in this book to have provided a fuller picture of Matisse’s ambitions, foregrounding some less-known projects, and bringing them together in one account. And I want to emphasize that his devotion to innovative new procedures and new materials was in the service of art whose physical appearance was ultimately a product of his faith in others.

John Klein is professor of art history at Washington University in St. Louis.