I was driving the other day with my kids in the car. Henry, like most five-year-olds, is full of questions. “Where do people come from?” “If you could be any animal, what would it be?” “When is my Thor Halloween costume going to arrive?”

But this day, his question was “Are all chefs bad?”

“Well,” he said, settling into the story, “I heard that there were these two boys who wanted to be married. And they went to a bakery and asked for a cake. And the chef wouldn’t give it to them!”

Putting into practice my best parental habits, which happen to align nicely with those of my job as a law professor, I answered this description with a question. “What do you think of that?”

Ruby, Henry’s eight-year-old sister chimed in. “Did they throw the baker in jail?”

I chuckled. “No. In fact, the Supreme Court said that the baker didn’t have to sell the cake to the two men.” Ruby knows all about the Supreme Court, since she is obsessed with her books about Sonia Sotomayor (signed!) and the Notorious RBG.

Ruby and Henry agreed that the Court had made a mistake. They said something in kid language that if translated into adult would be “That’s some bullshit.”

I did not want to waste an opportunity to toot my own horn with my offspring. “Well, kids, you’ll be happy to know that Daddy was involved in that case and worked on the side of the two men who wanted to buy the cake.”

My kids did not then say, “Daddy, you’re our hero.” But I am confident they thought it.

I have no idea how Henry had heard about the Masterpiece Cakeshop controversy, which made it to the Supreme Court last year. Maybe he heard me talking about it, or maybe he heard someone else discussing it. But other than calling a baker a “chef,” he got the facts basically correct.

A baker by the name of Jack Phillips refused to sell a wedding cake to two men, Charlie Craig and Dave Mullins, who wanted to celebrate their wedding. The bakery is in Colorado, and under Colorado law, businesses may not discriminate against customers on the basis of their sexual orientation. Phillips argued, however, that the cake constituted speech, and the anti-discrimination statute forced him to speak in favor of celebrating a union that he believes to be immoral and wrong.

The battle at the Supreme Court focused on the clash between the couple’s right to be free from discrimination, and Phillips’s putative right to not be forced to speak in favor of something with which he disagreed. Eventually, the Court sided with the baker Phillips, but on a narrow, idiosyncratic ground that punted the equality/freedom questions to a later case.

But we had something to offer in this case and others like it. Phillips argued that his first amendment rights were being infringed. But you can see by the name of the case — Masterpiece Cakeshop Ltd., v. Colorado Civil Rights Commission — that it was not Phillips who had been held accountable. It was the business, not Phillips, that was obligated to serve Craig and Mullins.

This should have made a difference. Corporations are separate from their owners and have their own legal personality. Phillips had incorporated his bakery in order to take advantage of this separateness for liability reasons. If the bakery goes bankrupt and owes creditors, Phillips will not have to pay out of his personal accounts. But when it came to his religious views, he wanted the Court to ignore the legal separateness of the bakery.

As we argued in a brief to the Court, he should not be allowed to have his cake and eat it too.

This is an example of a situation in which corporate “personhood” is a good thing. The religious claims of shareholders and owners should not be automatically projected onto businesses.

Kent Greenfield is a law professor at Boston College, a former Supreme Court clerk, and an expert in constitutional and corporate law. His work has been featured in the New York Times, the Washington Post, the Atlantic, and on CNN. He lives in Cambridge, MA. 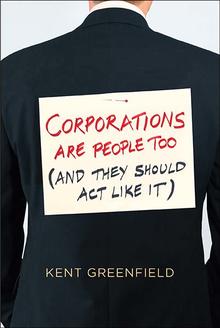