The mobilization against the Dakota Access Pipeline (DAPL) in the winter of 2016-2017 has made headlines throughout the world. In the first days of September 2016, the challenge raised by members of the Standing Rock Sioux Tribe to the unbridled exploitation of natural resources in their region and the danger posed to their daily source of water, the Oahe Lake, was suddenly all over the news. No doubt, the symbolism of Native Americans, long held up as “natural” “wards of nature”, was a powerful one. More influential, perhaps, were the images of the conflict that supported the propagation of the news and sustained the public’s interest. First in these series, the use of attack dogs against unarmed protesters in September triggered memories of the Civil Rights Era. It all but jumpstarted a mobilization that had been confined to limited circles on the reservation itself. Outrage followed and with it, thousands of sympathizers rallied the point North of Standing Rock where local protesters were trying to block the expansion of the pipeline. As camps were being built and methods devised to peacefully oppose the pipeline, Standing Rock was put on the map for millions of Americans. The mighty echo chamber of the US media and the considerably less developed but still international networks of indigenous activists turned the protest into a global event and “Standing for Standing Rock” into a household slogan.

The global impact of the protest remains to be assessed, as does its position in a sequence of mobilizations that have occurred and are occurring right now in many different locales on the planet. But it is already obvious that, for all its internationalism, the story of the movement also has clear American roots. Some of these, as alluded to above, are national in scope: the protest tapped the moral legitimacy of the Civil Rights era, borrowing from it an emphasis on non-violence and prayer very different from the militant tone of Red Power activism in the 1960s and 1970s. In fact most “protesters” rejected that term, instead embracing the phrase “water protectors” to emphasize the positive stance of their struggle, and keep at bay the association with violence, anarchy and chaos that their enemies had no qualms throwing at them. Undeniably strategic and regarded as morally inevitable in a fight that purported to defend the access to water of millions of Americans, the embrace of non-violence also had historical roots. After the militant decades of the 1960s and the 1970s, non-violence became enshrined as an element of the “golden age” of protest, a skewed but dominant vision of the Civil Rights Movement that has since been used to differentiate between legitimate and illegitimate protests in the USA. Although located very far away from the epicenters of that past struggle, the fight at Standing Rock very much reflected these American standards.

Perhaps no clearer symbol of the specifically American roots of the “moral tone” of the protest could be found that the event that transpired in late November 2016, when a reported 2,000 veterans of all backgrounds joined the water protectors in a bid to protect them – by peaceful means – against violent policing. Seen from outside the US, this was a mind-boggling event: how could veterans of the US armed forces, an essential element of the colonization of the North American continent, be enlisted to defend Native (among others) protesters? How could men and women who had volunteered to bear arms embrace non-violence? How did this strangely euphemized take on the military history of the US help the cause of indigenous people, water, and justice?

To explain their commitment to the cause and to Native American efforts, the “Veterans Stand For Standing Rock” group actually drew on a tradition that has attracted little scholarly attention. They came to the rescue, they said, of a group of people that had disproportionately participated in US military efforts throughout the twentieth century. In continuity with thousands of American ex-service men and women before them, the Veterans for Standing Rock thought they owed special compensation to Native Americans for their patriotism. Clearly, previous generations of veterans had emphasized vastly different ways of “paying back” Americans, whether it be giving them citizenship, protecting their voting rights, compensating them for land lost or criticizing reservations as “concentration camps”. But the premise was the same: by enlisting or by abstaining from resisting the draft, Native Americans had, since World War One, amply demonstrated that they were no enemies of the US; that, indeed, they were more than willing to defend its land. As such, they deserved the public’s attention. They deserved to be heard. And non-Native veterans, now as before, were willing to help.

Emphasizing these American roots of the movement at Standing Rock does not mean denying the very international nature of the fight, especially its indigenous component. But it is a way to point to the very local moral conditions that made possible the alliances and collaboration that were such a prominent feature of the mobilization. And we might well have to go way back, to the long past days of World War One, to understand some of its most paradoxical and moving manifestations. While it’s but one of the multiple threads that need to be followed to understand just what exactly happened at Standing Rock in the winter of 2016-2017, it’s one that will be pursued with profit –because it will give us a very rarely articulated perspective on US national history in the twentieth century. One in which conflict and domination of one group over others have not prevented exchanges, friendship, collaboration, and, sometimes, victory in the common cause.

Thomas Grillot is editor-in-chief of the online publication La Vie des Idées, the author of Après la Grande Guerre, and a researcher at the Centre National de la Recherche Scientifique. 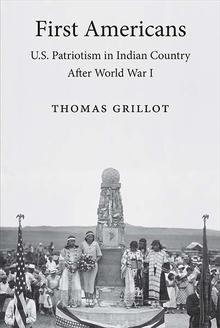