Who’s the good guy? Who’s the bad guy? Why isn’t there more dialogue?  It seems kind of slow. Why are their eyes so big? Shouldn’t the music be more Japanese-y? Hey, did I just see the hero die?

These are the kind of questions I’ve gotten in the almost thirty years I have been researching and teaching Japanese animation, or anime. What is anime? The simplest answer is “cartoons from Japan with a particular look to them based on the use of fewer cels per minute than American animation.” Even now, with CGI taking over so much animation, anime tends to use a definite visual style such as, yes, featuring characters whose large eyes are meant to reflect a wide range of emotions.

But anime is much more than that. It is an art form that arose from a modern society scraping off the ashes of war, hell-bent on economic growth and industrialization, and at the same time mourning lost traditions, values, and landscapes—in other words the tumultuous world of twentieth and twenty-first century Japan.

I was drawn to anime because it offered a rich and varied thematic universe that differed not only from American animation but also from the live action movies produced by Hollywood. Anime can be romantic and humorous, but it can also be dystopian, apocalyptic, and even elegiac in ways that American pop culture seemed loath to explore when the anime boom in the West began in the 1990’s.

The first anime movie I ever saw was in 1990 when, teaching in London, I wandered into the European premier of the movie Akira—a raw, kinetic, and stunningly dark story of motor cycle riding youths resisting authority in a post-apocalyptic Tokyo. Not only was the story multilayered and immersive, but the overwhelming visuals—from a vision of a neon city thrusting at the night sky to a glimpse of a gigantic black crater—were like nothing I had ever seen. The second anime movie I viewed was Hayao Miyazaki’s Nausicaa of the Valley of the Wind, another post-apocalyptic science fiction fantasy, but this time with a young girl as its protagonist. Nausicaa, the movie’s smart, capable heroine, makes her way through a ruined thirtieth century world where she engages with sentient insects, warring humans, and a toxic jungle that, in its paradoxically mysterious beauty becomes almost a character in and of itself.

While Hollywood cinema was churning out simplistic stories of romance and rapscallions, anime ushered viewers into darker, more challenging experiences in which, as one of my students put it, “Sometimes the good guy dies.” For young Americans, especially after the catastrophe on 9/11, these visions of shadowy worlds where light contends with darkness moved them on a different level than did domestic entertainment. Japanese animators seemed comfortable with a morally ambiguous universe and characters that possessed depth and complexity. Or, as an anime fan I once interviewed put it, “Anime characters feel more real than most characters in American media, animated or not.”

I have been teaching courses on anime for over twenty years, at the University of Texas, Harvard, University of Pennsylvania, and now at Tufts where I teach courses such as “Introduction to Animation” and “Anime Auteurs.” Speaking of auteurs, my most popular anime-related course has been my yearly seminar on the great animated film director, Hayao Miyazaki.

“Can an animation director really be an auteur?” my students ask, particularly film majors raised on Quentin Tarantino or Spike Lee. Yes, he or she can, especially in the case of Miyazaki, who not only still hand draws most of his films from storyboards that he creates, but also personally supervises the selection of voice actors and the music, to the point of frequently writing the lyrics to a film’s theme song. Above all, Miyazaki’s strong personal vision—romantic, utopian, passionate, and sometimes angry—has created an immersive universe that I call “Miyazakiworld.”

But Miyazaki is not the only anime director worth looking at. I’d like to conclude by offering a selection of my favorite anime that, if you are interested, will introduce some of the many worlds that anime has to offer.

For example, do you like mysteries? Then, consider Perfect Blue by another great auteur—the late, lamented director Satoshi Kon. Perfect Blue is a mind-bending thriller about a pop idol who tries to become a serious actress, only to encounter terrifying resistance from her fans. How about music? Shinichiro Watanabe’s Cowboy Bebop presents a future world where a motley group of “space cowboys” search for bounty to the tune of jazz, rock, and country-western inflected themes. For fantasy lovers who appreciate quest stories, Full Metal Alchemist follows the adventures of two brothers looking for the Philospher’s Stone across an alternative history medieval landscape.  Cyberpunk science fiction? Ghost in the Shell by the brilliant director Mamoru Oshii brings us a fantastically realized dystopian future where a female cyborg assassin fights cyber terrorism while she ponders human and cyborg existence. Even seemingly frivolous anime can explore serious themes such as Ouran High School’s humorous look at gender bending.

These are some of my favorite works but there are so many more. Welcome to the world of anime!

Susan Napier is the Goldthwaite Professor of Rhetoric and Japanese Studies at Tufts University. She is the author of Anime from Akira to “Howl’s Moving Castle”: Experiencing Contemporary Japanese Animation, among other books. 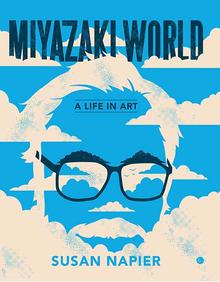